Beer is Fermented—So Does That Mean It Contains Probiotics?

We know that many fermented foods contain live health-supporting probiotics. But does that include beer? Unfortunately, most types of beer lose their live cultures during the brewing process. But recently, experts have suggested that specific, strong beers contain beneficial probiotic yeast. Here's what makes them special, and how other beers plan to follow suit.

A balanced microbiome can support wellness—and probiotics can help

Our gut (particularly the large intestine) contains millions of microbes—some good, some bad. It’s always in our best interest to feed the good ones and starve out the bad ones, as a proper microbiome balance has many well-documented health benefits. This includes:

To learn more about the benefits of probiotics, check out our summary blog of the science.

So what promotes a healthy microbiome? Studies show that adequate sleep, stress maintenance, and regular exercise are all related.[1,2,3] But the most-studied method for improving the microbiome is via the foods we eat and supplements we take. When live microorganisms are introduced to everyday foods, they can drastically alter their nutritional makeup for the better—and in some cases, these microorganisms stay in foods or beverages up through the moment we consume them. And some strains of microbes called probiotics are even able to withstand the turmoil of the stomach and small intestine, allowing them to settle in the large intestine and combat unhealthy colonies. Some foods that contain these live probiotics are kimchi, sauerkraut, yogurt, and kombucha. But you came here to learn about a very specific beverage...

So—are there probiotics in beer?

For the most part, beer unfortunately does not contain live active cultures of probiotics. Though grains and hops are indeed fermented to create our beloved brews, the acids that leech from the hops in the process ultimately kill off any living cultures before the bottle reaches the shelf.


But interestingly, experts in the topic suggest that certain types of beer have broken this barrier. More specifically, traditional Belgian beers like Hoegaarden, Westmalle Tripel, and Echt Kriekenbier contain active cultures of live probiotic yeast. The secret? Though most beers are only fermented once (in the barrel) these brews go through a second fermentation in the bottles themselves. This extra step ensures live cultures are still present when you pop the cap, allowing you to reap the probiotic benefits. 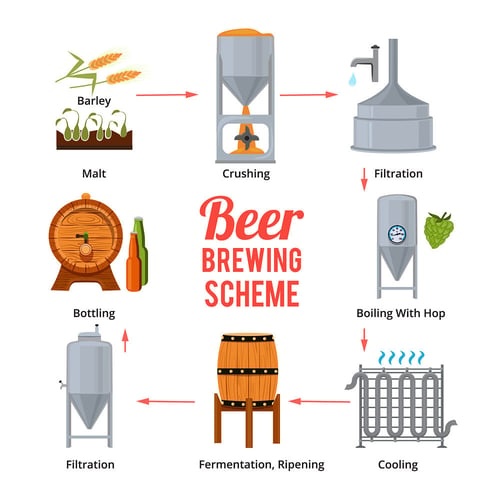 When it comes to alcoholic antioxidants, red wine seems to get all the glory. But beer should share in the revelry—many beers have a high content of polyphenols (a general class of antioxidant). And thanks to the large quantities of hops used in the brewing process, it also contains xanthohumol, a phenolic compound that's displayed chemopreventative effects in cancer cells in in vitro studies.[4]


In general, the concentration of polyphenols varies widely across beer types. One study found that bock (a strong German lager) had the greatest antioxidant power, followed by abbey, ale, wheat, pilsner, and lager.[5] Alcohol-free beers actually had the lowest antioxidant power, likely because ethanol (the alcohol in beer) aids in the absorption of phenolic compounds.[5,6]

This combination of ethanol and antioxidants is powerful—and likely contributes to the established association between moderate alcohol consumption and reduced mortality. Antioxidants help to combat the oxidation of compounds like LDL (bad) cholesterol, while ethanol plays a role in platelet function, HDL (good) cholesterol metabolism, and the break down of blood clots—all of which support cardiovascular health.[6]

Moderate alcohol consumption is defined as up to 1 drink per day for women and up to 2 for men. Excessive alcohol intake can be detrimental to your health, so prioritize moderation.

Still, expect more probiotic beers to hit the shelves in the near future

In 2017, researchers from the University of Singapore designed a novel method of retaining live cultures throughout the duration of the brewing process. The end product, which has a flavor profile similar to a sour beer, retains active Lactobacillus paracasei L26—a human probiotic strain which the researchers report can help neutralize toxins and pathogens and support the immune system. Techniques like this are likely to be picked up by industry partners to make probiotic beers widely available.


"Kombucha beers" are also busting on the scene. In San Francisco, one kombucha company has created four flavors of a high-alcohol kombucha—and at 5-10% ABV, it's legally considered a beer. Plus, unlike most brews, the final bottle contains multiple strains of live active probiotics.

In general, probiotic foods and beverages are surging in popularity. Though the probiotic beer market is still in its infancy, it's safe to assume more will be hitting the shelves soon.

A summary of probiotics in beer