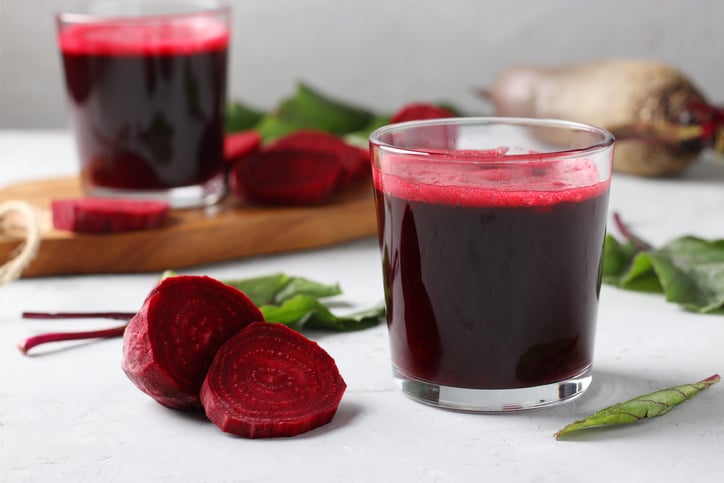 Mom always told you to eat your beets. As usual, her instruction was on point. The health benefits of beets are well documented, but there’s a new trend on the performance-enhancing block in the form of juice— and not the illegal kind. Beetroot juice can support athletic performance due to its high natural nitrate concentration that can improve cardiorespiratory endurance in athletes.

How does beetroot juice impact performance?

Knocking back a shot of beetroot juice can enhance muscle efficiency by reducing the oxygen-cost of exercise, lowering blood pressure and improving cognitive function. But what’s the hard science behind those claims? In a nutshell, beetroot gets its power from inorganic nitrates—the same kind found in dark, leafy green veggies.

After ingestion, nitrate is converted into nitrite by bacteria in our saliva. In the stomach, some of that nitrite converts to nitric oxide (NO), and the rest is circulated and stored as nitrite in our blood.  Nitrites can be converted into NO during low oxygen availability, which mostly occurs in skeletal muscle during exercise.2

NO is something your body needs: it regulates blood flow, neurotransmission, immunity, muscle contraction, mitochondrial respiration as well as the balance of glucose and calcium.1 All the good stuff.

NO relaxes the muscles by widening blood vessels when it spreads through underlying muscle cells in the arterial walls. This affects how efficiently cells use oxygen -- efficient oxygen use is a very good thing -- and this is one of the reasons why beetroot juice can be used to support sport performance.

The benefits don’t stop there, though. Beetroot juice also contains other excellent nutrients that are great on their own and also act in conjunction with nitrates in beets3, such as:

Fun fact: one study confirmed that it’s actually the nitrates, and not the other nutrients, that are responsible for most of the positive physiological effects of beetroot juice.

How do beets impact cognitive function of athletes?

Of course, your muscles aren’t the only critical component of sport performance. Your brain is pretty important, too. Think back to the last time you were exhausted and tried to run a 5k or complete an obstacle course. Chances are, your reflexes—and thus, your results—weren’t exactly sharp.

Sounds like a pretty compelling reason to have a glass. If juice isn’t your thing and you’d prefer to just chow down on beets as a crunchy snack, it turns out that’s effective too. This study of a group of runners suggests that eating whole beetroot may be as effective in improving running performance as juice.

Beets and nitrates may benefit fast-twitch muscle fibers the most

Not all exercise is created equal, and different activities require different fuel. The same holds true in the case of beetroot juice—its efficacy varies according to a person’s fitness level and the intensity of the exercise.3 Andrew Jones, PhD, a physiologist and “beetroot expert” at the University of Exeter, points out that the effect of beetroot juice on prolonged endurance exercise hasn’t been explored much.

Fast-twitch muscle fibers — used in burst movements and which fatigue more quickly — may be more affected by nitrates than the slow-twitch muscle fibers used in sustained endurance exercise. As for fitness level, it turns out that highly-trained people could have higher blood nitrite values than those who are less trained, which means they might see less of a response to a typical dose of beetroot juice.4

"There is certainly emerging and compelling evidence that the nitrates found in beetroot juice may offer an ergogenic 'edge' to higher intensity aerobic performance. The added benefit is that beetroot naturally contains a hefty dose of other desirable nutrients.”
– Jennifer Sacheck, Associate Professor of Nutrition at the Friedman School of Nutrition Science and Policy at Tufts University 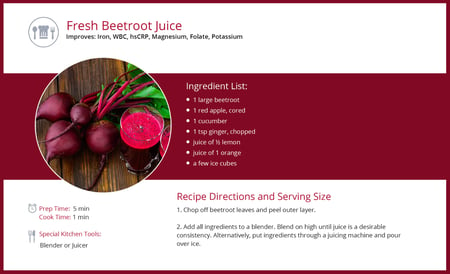 How to use beetroot juice to enhance performance

How much beetroot juice should you drink?

Consuming more beetroot juice does have an effect on blood nitrite levels, but there is less of a return for enhancing performance.1 The optimal amount is 8.4 mmol of nitrate, but 5-9 mmol of nitrate/day is recommended as sufficient enough.3

According to Jones, beetroot juice could yield great effects if taken short-term before competition, from 2-6 days (and up to 15 days). But for acute effects, it should be consumed 2-3 hours before competition.

Where can you buy beetroot juice?

Beetroot juice supplements and their derivatives are popping up all over the place, and we’re not in the business of endorsing any particular brand, nor evaluating each. That’s why we’ve provided you with our handy, downloadable Beetroot Juice Recipe card, earlier in this post.

If you don’t own a juicer or are always on the go, you might want to check out one of the many pre-packaged beetroot products on the market.

What to know before adding beets in your diet