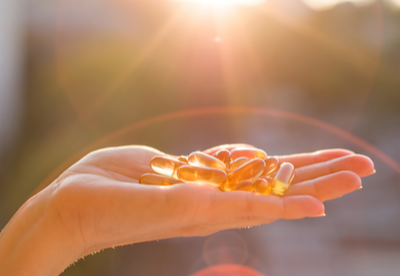 About 145 million Americans use nutritional supplements each year—that’s almost one-half of the population.[1] One of the most common is fish oil. They annually generate $1.2 billion in sales, according to Nutrition Business Journal. Manufacturers claim that these fish oil can lower your risk of cardiovascular diseases, improve immunity, and boost athletic performance. But what does the science say? In this article, the research of the effects of fish oil supplements on key health indicators in your body—especially triglycerides, cholesterol, and testosterone—will be critically evaluated.

What exactly is fish oil?

But what does the research really say about the effect of fish oil supplements on your health? Do they lower risk of cardiovascular diseases by lowering biomarkers such as triglycerides and LDL cholesterol while increasing HDL cholesterol? Do they reduce inflammation by lowering indicators such as C-Reactive protein (CRP)? Can they maximize strength by boosting your testosterone? Below we present the highest-quality research studies and our key takeaways and recommendations. While this information is certainly valuable in itself, the best way to know the impact of fish oil supplements on your health is to regularly monitor your internal biochemistry.

Fat molecules in the blood called triglycerides store energy for later use. While they are essential for our health, elevated blood levels of triglycerides are associated with an increased risk of a variety of cardiovascular diseases [4]. Can fish oil supplements lower their levels and protect your heart?

Recommendation: If you have proven high triglyceride levels through InsideTracker blood testing, taking a daily dose of at least 3-4 grams of fish oil along with exercise is an effective way to lower them. 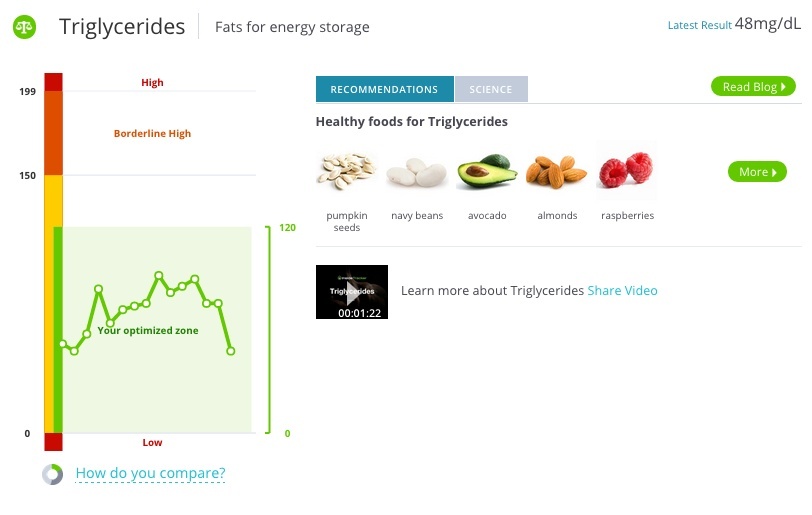 Cholesterol is an essential fatty molecule used to build cell membranes and hormones. It is transported by molecules called lipoproteins that come in two varieties: high-density lipoprotein (HDL) and low-density lipoprotein (LDL). Elevated HDL levels are good for your overall cardiovascular health [6]. These cholesterol “scavengers” collect unused cholesterol and bring it to the liver to be recycled and destroyed. By doing this, they prevent the buildup of plaque in arteries and lower the risk of a variety of heart and blood vessel-related diseases. [6] Given that fish oil supplements benefit your heart by lowering your triglycerides, can they elevate HDL as well?

The research is mixed. A meta-analysis of 47 research studies assessing over 16,000 untreated subjects with unhealthy levels of HDL showed, on average, a very minimal increase in HDL cholesterol after fish oil supplementation. Because of their thorough analysis, researchers concluded “fish oil supplementation [does not] produce a clinically significant dose-dependent reduction of HDL cholesterol.” [7]

However, some individual research studies with more specific dosage recommendations and types of subjects suggest that consuming fish oil supplements may increase HDL levels by a small but clinically significant degree. In a 12-week-long intervention study in 2007, researchers assessed the impact of daily fish oil consumption and exercise on 28 men and 53 women. All subjects were overweight and had high blood pressure, cholesterol, or triglycerides. However, none had any cardiovascular-related diseases such as diabetes. Researchers divided them into four groups. The first group of 17 consumed 6 grams of fish oil per day. The second group of 16 consumed the same dose of fish oil and walked 45 minutes three days/week. The third group took 6 grams of sunflower oil per day, and the fourth group took the same dose of sunflower oil and walked 45 minutes three days/week.

After the 12-week intervention, researchers observed an increase in HDL cholesterol by 9.70% and 11.60% in the fish oil alone group and the fish oil and exercise group respectively [8]. By contrast, the two sunflower oil supplement groups experienced insignificant HDL changes. Researchers concluded that “FO supplements and regular exercise both reduce body fat and improve cardiovascular and metabolic health.” [8]

Recommendation: Carefully monitor your HDL levels to see if fish oil supplementation has a positive or neutral impact on your HDL. 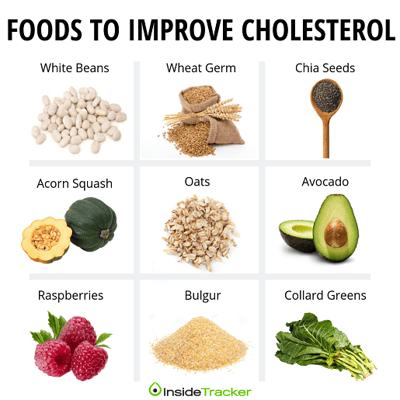 In contrast to HDL cholesterol, elevated levels of low-density lipoprotein (LDL) are linked to a variety of cardiovascular illnesses. Does fish oil supplementation nudge the levels in the right direction?

In fact, some research studies suggest that fish oil supplements might even increase LDL cholesterol. In a 12-week, double-blind, parallel design study, researchers recruited 60 adults with elevated triglycerides and placed them into two groups. The first group of 45 subjects took a 4-gram supplement of fish oil (2 grams EPA and 2 grams DHA) per day while the second group of 15 subjects took a placebo of soy oil with identical fat content. At the conclusion of the study, the researchers noted an average increase in LDL cholesterol by 13% in the group that took the fish oil supplement compared. Thus, the authors concluded that “fish oil supplementation while having a substantial and highly clinically relevant beneficial impact on lowering blood TG concentrations, also has a modest adverse LDL-C increasing effect.” [9]

Recommendation: If you take fish oil supplements to lower your triglycerides, be careful to regularly monitor your LDL cholesterol to see if it’s heading in the right direction.

C-reactive protein, also known as CRP, is a common indicator of blood vessel inflammation in the body. Because increased levels lead to aging of cellular tissues that results in a variety of diseases, we include it with other well-known biomarkers such as Vitamin D and cortisol in our InnerAge and Ultimate panels. Athletes often take fish oil supplements to reduce inflammation—but does it affect CRP?

There isn’t much evidence suggesting that fish oil affects CRP levels in the diabetic population. In a 2012 randomized, placebo-controlled clinical trial lasting eight weeks, researchers recruited 84 subjects aged 45-85 with a >2-year history of type 2 diabetes. They divided subjects into two groups. The first took three omega-3 capsules per day, containing a little over 2,500 mg of fish oil. The second group served as the placebos and took three 2,100-mg pills of sunflower oil per day. Researchers discovered no significant change in CRP levels between the two groups. These findings suggest that fish oil supplements have little effect on CRP levels. [10] It is important to note, though, that consuming fish oil did significantly decrease levels of two other indicators of inflammation: TNF-alpha and IL-2. [10]

That being said, research suggests that fish oil supplementation may help decrease CRP levels in one specific population: athletic men. In a 2009 study, researchers recruited 14 men in good shape and divided them into two groups for a six-week intervention. The first group consumed eight supplements containing about 4,000 mg of high-quality fish oil per day. The second group consumed the same quantity of soybean oil and served as the placebo. At the end of six weeks, subjects performed a submaximal exercise test in which they walked on a treadmill for 60 minutes while carrying a backpack equal to 25% of their body mass. Assessing the subjects’ blood measurements, researchers observed significantly lower levels of CRP both when resting and after the exercise intervention in the men who had consumed fish oil supplements. The researchers did state that “EPA/DHA supplementation does not appear necessary for attenuation of exercise-induced oxidative stress or inflammation in a sample of exercise-trained men.” [11] This means that athletes should only take fish oil supplements to treat CRP if they are proven through blood testing to have high levels of CRP and are in danger of overtraining.

Recommendation: Consider taking up to eight capsules of high-quality fish oil per day if you’re an athlete or weekend warrior with high levels of CRP. 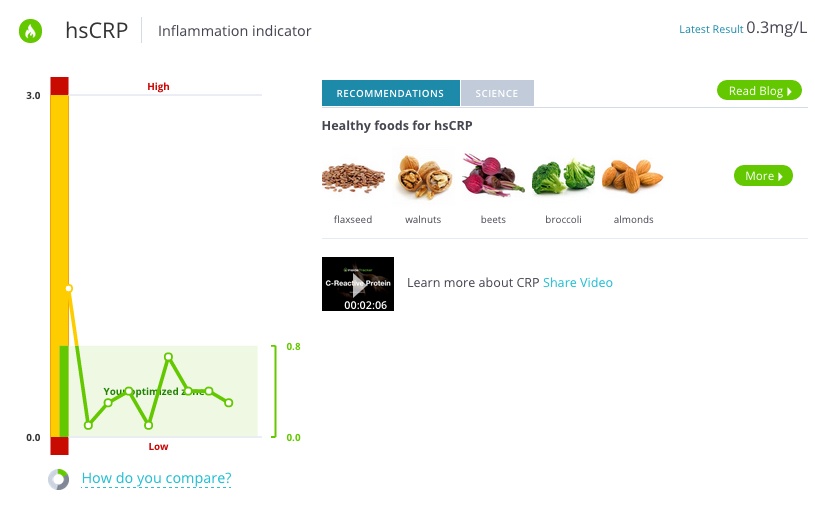 Testosterone is known to make men stronger and more “manly.” But it is actually a crucial hormone in regulating the growth and development of tissues and maintenance of mental health in both men and women.

Some claims circulating on the internet and social media say that fish oil supplements boost testosterone. However, not a single high-quality research study supports this finding. That being said, there is evidence that fish oil supplementation may boost strength training, at least among elderly women. In a 2012 study, researchers recruited forty-five women with an average age of 64 years and randomly assigned them to one of three groups. The first group of 15 performed strength training only for 90 days, the second group of 15 performed the same strength-training program and received fish oil supplementation (2 grams/day) for 90 days, and the final group of 15 underwent the same strength-training program and fish oil supplementation as the previous group but started supplementing 60 days prior to the 90 day strength-training regimen. The researchers assessed muscle growth and functional strength of the women before and after the intervention and discovered that while they had all experienced gains in muscle activation strength, these gains were more pronounced in subjects who took fish oil. [12] As a result of their findings, researchers concluded that “the inclusion of FO supplementation caused greater improvements in muscle strength and functional capacity.” [12]

Key takeaway: A small number of studies suggest that fish oil supplements may boost strength in healthy, older women though the mechanism is unclear.

Recommendation: If you are an older woman, taking at least 2 grams of fish oil supplements per day might be a good choice if you are looking to gain muscle. Keep track of your testosterone levels to see if there is an effect.

How to choose the right fish oil supplement

There are hundreds of choices of fish oil supplements. However, not all are created equal. According to Labdoor, almost half don’t contain the daily recommendation of 500 mg of omega-3 fatty acids. Additionally, some are contaminated with mercury and other toxins. So it's best to make sure whichever supplement brand you choose is third-party tested and is transparent about heavy metal testing and where exactly the firsh oil is sourced. Each manufacturer provides recommended daily dosages. However, we suggest consulting with a nutrition or healthcare professional a choose a dose based on your specific biomarkers.

Keep in mind that while fish oil supplements have proven benefits, we recommend getting some of your omega-3 acids from natural sources such as fatty fish, flaxseed, chia seeds, and walnuts. These whole foods also contain many other nutrients and healthy substances that maximize the benefits of fish oil supplements. Two to three servings of fatty fish per week satisfy the weekly requirement of omega-3 fatty acids. If you do not like these foods or find them hard to fit into your diet, supplements might be most beneficial.

Vegetarians and vegans: you can get your omega-3 fatty acids through flaxseed, walnuts, or pills containing alpha-linoleic acid (ALA). They do not contain the two kinds of omega-3 fatty acids—EPA and DHA—unique to fish oil supplements and fatty fish. However, no conclusive research to date has shown that these two sources of omega fatty acids confer unique benefits that ALA doesn’t provide.

Science shows that fish oil can help maintain heart health by lowering triglycerides and possibly optimizing your HDL and LDL cholesterol. While research is mixed, fish oil supplements may help athletes reduce elevated levels of CRP. Additionally, while no research studies have assessed the association between fish oil and testosterone, some studies show that supplementation can improve your strength and muscle gains. Ultimately, the best way to know if omega-3 supplements are right for YOU is to get a test looking at your current biomarkers and then consulting with your doctor. Click below to learn where you are and the useful tools that will guide you to greater health and athletic performance.

Looking in improve your cholesterol through food? Check out these 5 FREE recipes! 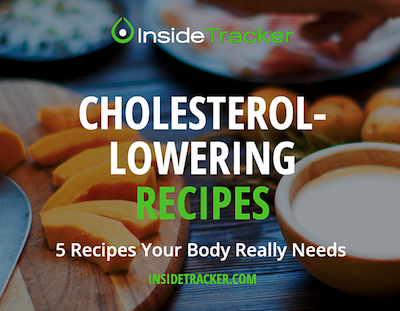