Is Cheese Bad for You? The Evidence Says No—with Some Exceptions 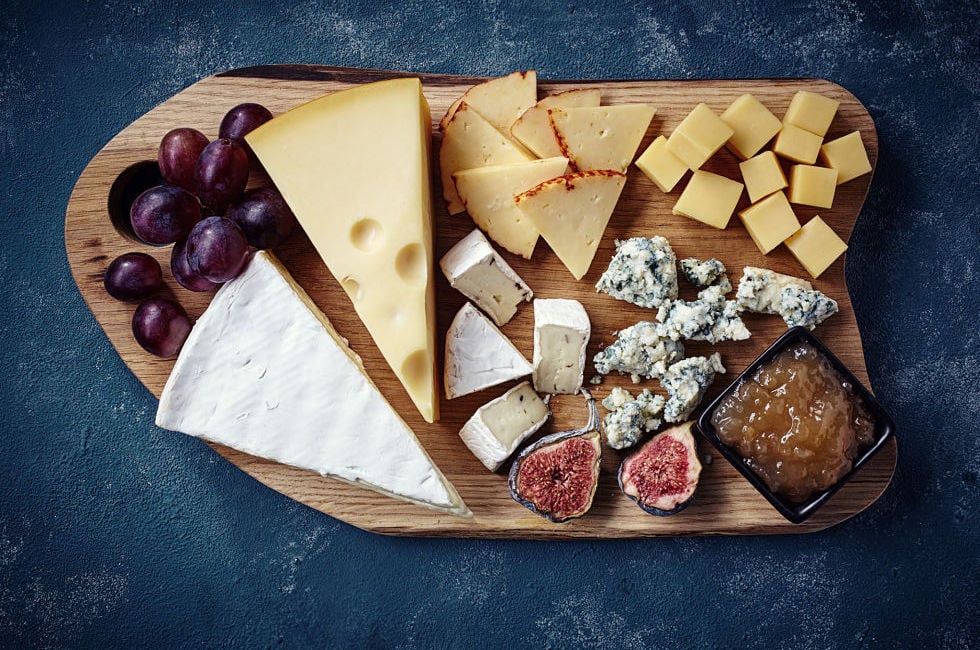 Cheese’s standing as a component of a healthy diet has long been debated. And it’s true that some animal products promote disease, but is cheese bad for you? Perhaps not—evidence shows that cheese doesn’t deserve to be treated the same as meat or milk.

Cheese is a good source of protein and calcium, and research largely doesn’t support the theory that cheese contributes to chronic disease.

As an animal product, cheese has long been considered unhealthy

Along with other animal food products, cheese has had a reputation for being unhealthy. But the tide started to change when large cohort studies found that dairy’s relationship with chronic disease and mortality was not to be confused with that of meat. In particular, a 2011 study from a team at Harvard found the consumption of dairy products was not associated with mortality and was even mildly protective against cardiovascular disease.[1]


But of course, dairy products vary substantially in nutritional content (like full-fat vs. fat-free) and how they’re produced (like whether they’re fermented, as is the case with yogurt and cheese). This variability leads us to today’s central question: how does cheese specifically affect health?

Research shows that some dairy fat can be dangerous for LDL (bad) cholesterol levels, but at different degrees. One randomized controlled trial, for example, found that butter raised LDL cholesterol significantly more than cheese did.[2] And in large studies of overall dairy on health, this finding usually holds up; butter is among the least healthy dairy foods, and cheese among the most healthy.


And interestingly, it seems that the overall amount of fat in cheese (which is typically largely saturated fat) doesn’t have a meaningful effect on cardiovascular or metabolic disease risk factors. Two separate randomized controlled trials tested the effects of regular-fat cheese on cholesterol levels and other metabolic disease risk factors. In one, neither fat-free (50g serving) nor regular-fat (80g serving) cheese increased total cholesterol, LDL cholesterol, triglycerides, or blood glucose after 8 weeks of daily intake.[3] The other, which compared 80g-servings of low-fat (13%) and regular-fat cheese, found that the regular-fat cheese did not increase total or LDL cholesterol, blood glucose, CRP (a major marker of inflammation), or waist circumference more than its low-fat counterpart.[4] These findings suggest that the saturated fat content in cheese doesn’t quite have the effect on disease risk once assumed. 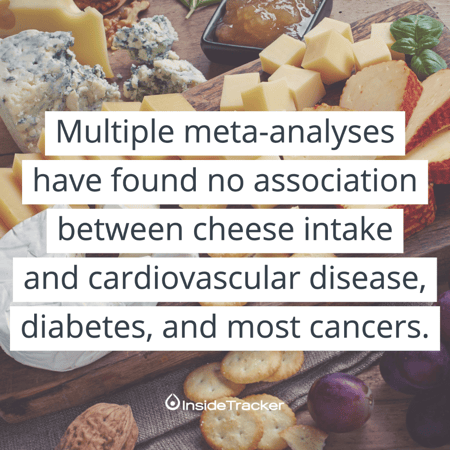 Multiple studies (covering hundreds of thousands of subjects) have found that cheese either does not increase—and may even lower—the risk of cardiovascular disease.[5,6] Similar effects have been found for diabetes and glycemic control—cheese has either a neutral or mildly protective effect.[7-9]

Dairy’s effect on inflammation remains in the spotlight


Inflammatory bowel disease (IBD) follows a similar pattern—some studies have found no association between cheese intake and IBD.[17] Interestingly, though, meta-analyses of various food groups on IBD have found that people with IBD diagnoses tend to eat significantly more cheese than undiagnosed people.[18,19] Does that mean cheese causes inflammation in the gut? It's possible, but this is not confirmed. For the most part, high cheese intake was found to be paired with intake of known pro-inflammatory foods like soda and processed meat. Meaning, in general, cheese was a component of a larger diet pattern that was relatively common in IBD patients. In general, it’s best to stick with no more than 1-2 servings of cheese per day (50-80g).

The relationship between cheese intake and acne, an inflammatory condition, has also been evaluated. Observational studies have concluded that cheese (and total dairy) intake is associated with acne prevalence.[20] And though a separate meta-analysis concluded the relationship was largely specific to milk and not cheese, it's probably worth testing removing dairy from your diet to address acne concerns.[21] 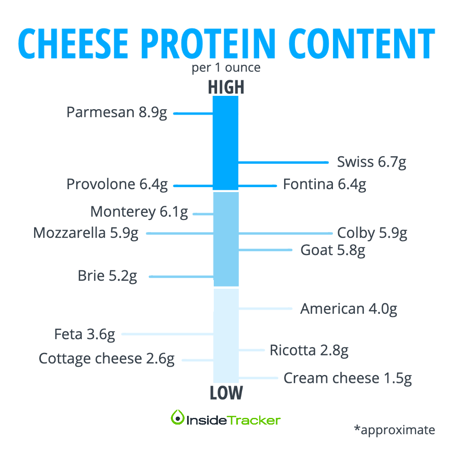 Still, not all cheeses are equal

When choosing which cheese to add to your diet, there are plenty of factors to consider. If you typically don’t tolerate lactose, well, for example, you’re better off sticking to hard cheeses like Parmesan—lactose is removed during the ripening process, so the harder the cheese, the less lactose. Fresh, soft cheeses, on the other hand, are usually lower in sodium and calories per gram. Here are some healthier cheese options and their key characteristics:

Is cheese bad for you? A summary of key points