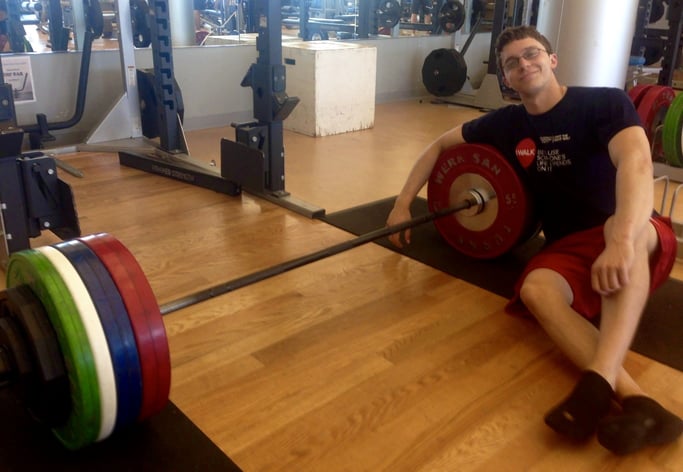 Every once in a while, someone on the team here at InsideTracker decides to take on an interesting challenge. From nutrition, to exercise, or a lack of both, these challenges have really run the gamut. So, when our Data Science Intern, Kenny Westerman, who is a Ph.D. student and holds his Masters in Biochemical and Molecular Nutrition from Tufts' Friedman School of Science and Policy, decided he wanted to take on a challenge of his own, who were we to stop him? After all, it's all in the name of science!

“You haven’t eaten anything? In three days?” This was the response I got from my astonished (and skeptical) coworkers at InsideTracker upon hearing about my current dietary experiment. As a nutrition-centric company, all of us are major foodies, and it's certainly hard to imagine resisting eating for even one entire day. So why did I choose to undergo what ultimately became a four-day fast?

I can honestly say that the major factor was curiosity. The human body can perform some amazing feats: run ultramarathons, climb at high altitude with low oxygen, and eat over 50 hot dogs in 10 minutes. So, even on this small scale, I wanted to see what my body could do! It came on as a spur-of-the-moment idea, while feeling particularly full after finishing most of a tub of peanut butter on a Monday night. I had always been keen to find out how I felt and operated during a longer fast…so, why not now?

As you can tell, this was not a well thought out plan (I might have psyched myself out if I had thought about it too much beforehand). But after discussions with my coworkers at InsideTracker, I realized that I had a fascinating opportunity to peek into my biology and see what was going on under the surface. If I was going to continue with this, I was going to do it right. That is how I found myself getting blood drawn on Friday afternoon (after about 85 hours of fasting) and again the following Tuesday morning (4 days after resuming eating as normal).

The specifics of an extended fast

I stopped eating after polishing off a midnight snack on Monday evening. The only food was a couple of handfuls of lettuce on Tuesday night, before deciding that I would even cut out non-caloric food consumption. I didn’t drink any coffee or tea, but did have copious amounts of water, sometimes with salt sprinkled in to keep my electrolytes at reasonable levels.

One of the most interesting aspects of this fast was the fact that after the first day, I didn’t feel hungry. Did I want food? Absolutely. But I came to realize that the desire was almost entirely based on the pleasure of eating, rather than a physiological need.

I worked out the very first morning, but decided to take it easy for the balance of the time in order to avoid further stress to my body. As time went on, I definitely started to feel the effects of the caloric restriction. I would sometimes get dizzy upon standing up, and could feel the lack of “oomph” in my muscles as I commuted on my bike. In addition, everything felt… slow. It seemed like my reaction time had slowed by a fraction, and each action felt like it had to be more deliberate. I am also a notorious fidgeter — tapping my feet, flipping pens, etc. — and this went away completely.

Sleep was tough the first night. I could tell that my body was not so thrilled with the accepting the idea that it would not receive any calories for another 8 hours. But it got much easier for the second two nights — my time to fall asleep and sleep duration were comparable to a normal night.

I was paying close attention to the state of my mind, as I was curious whether the onset of ketosis might provide some spike in mental performance. As my glucose levels dropped on Tuesday and Wednesday, I started to feel more “foggy," and had trouble concentrating to some extent. That said, I didn’t feel that my productivity was completely compromised — I was able to get work done, and social interactions were not affected (though I may have been a bit moody while watching a friend eat pizza one evening…I totally wasn’t drooling, I swear). On Friday afternoon (84 hrs. into the fast), I felt an almost sudden shift, as if someone had flipped a switch in my brain. Suddenly, my mood was quite improved and I felt mentally back to 100%. Could this have been some effect of reaching ketosis, or adapting to ketosis? Maybe so, although I would expect ketones to have been steadily rising during the entire period. If you're interested in reading more on fasting and ketosis, here's an awesome in-depth blog about it.

Nothing too crazy here. I lost about 5 pounds during the process, most of which was likely water weight, since I gained all of that weight back within a week of resuming eating.

The good stuff! InsideTracker arrives to rescue me from the mire of subjectivity. The three points on each chart correspond to my first test in January 2016 (3 months earlier, but acting as a “quasi-baseline”), my fasting test about 85 hours into the fast, and my post-fasting test, 4 days afterwards.

Glucose went way down, which probably reflects the extremely low glycogen stores I had at that point in time, as well as a shift to generating much of my energy from ketones. Although lower blood glucose is typically regarded as beneficial, it is hard to say whether levels during a fast are diagnostic in any way. 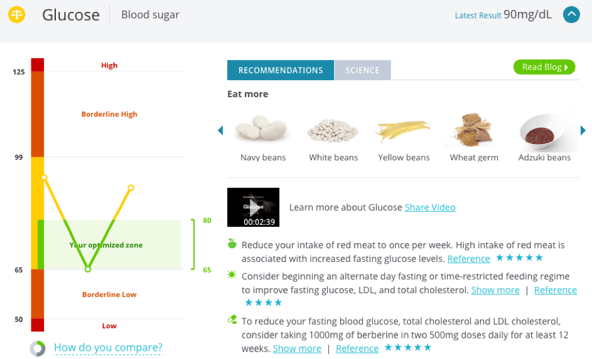 There was definitely some crazy stuff going on here. Testosterone dropped like a rock, and cortisol shot up during the fast. This makes some sense, as a long fast imposes a pretty big stress on the body, during which time reproduction is probably not its biggest priority. I was definitely relieved to see both come back to normal once my caloric intake returned. SHBG also increased, which it is known to do in caloric restriction. 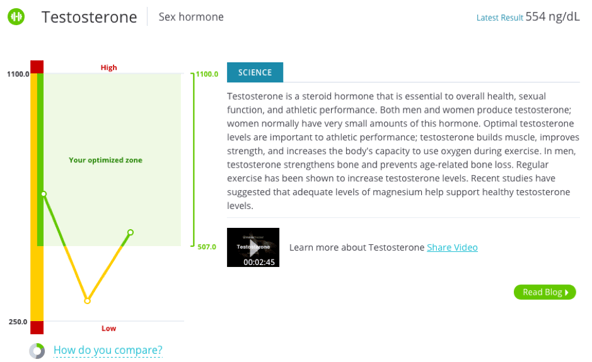 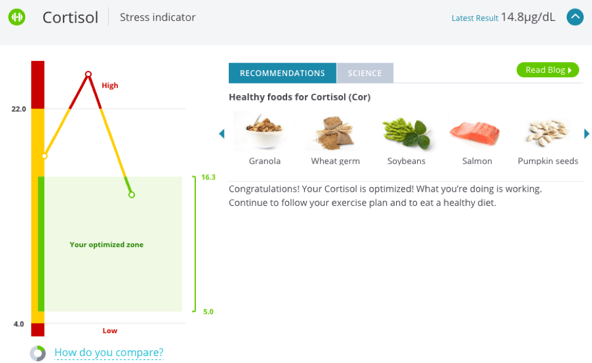 Sodium and magnesium both dropped a bit during the fast, probably reflecting my lack of intake of these nutrients. This could potentially have played a role in some of the dizziness and symptoms of low blood pressure that I experienced. 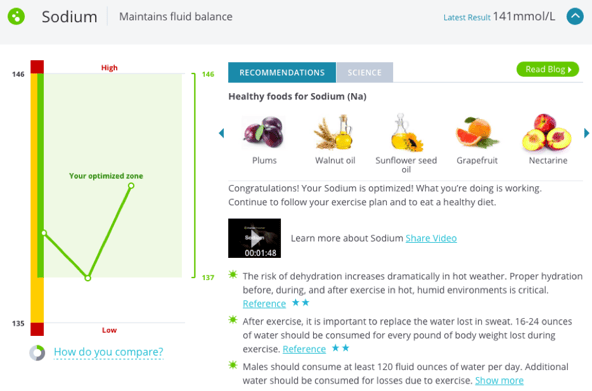 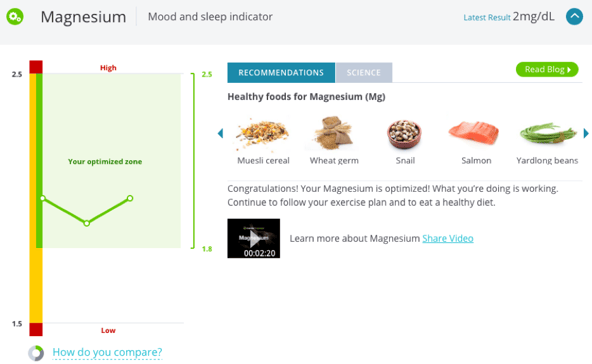 Though most of my iron markers stayed relatively constant, there was a marked increase in ferritin levels (almost triple!) that came back down soon after the fast. This was quite puzzling to me, because I could not think of a particular mechanism that might cause this effect. A professor at Tufts’ Friedman School of Nutrition suggested that, although unexpected, the rise could be due to ferritin’s role as an acute-phase reactant that tends to rise in response to stress. He also noted that a rise of only 100 ng/mL is not actually that large of an absolute change in ferritin. 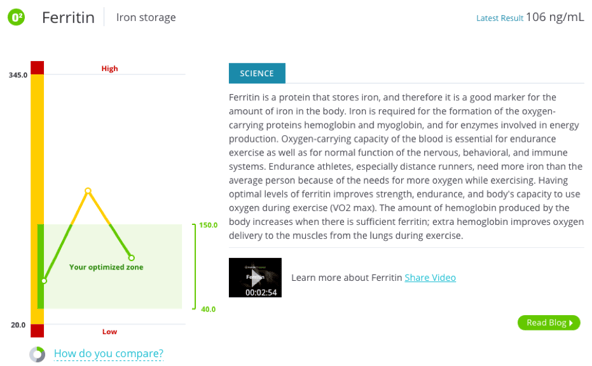 I was very interested to see what would happen to my white blood cell levels, as there is really intriguing evidence from Valter Longo’s lab at USC about immune regeneration during fasting protocols. I expected that I might see lower levels during the fast that recovered afterwards, but according to my results, they stayed fairly constant over the entire period. 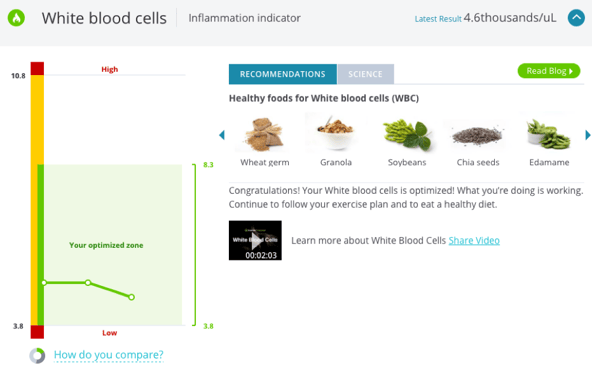 Though nothing groundbreaking happened, I am thrilled at having done the experiment. It was a new experience for me, and helped me understand one of the many types of stresses that our amazing bodies can cope with. If I were to repeat a similar experiment in the future, I would alter a couple of things:


P.S. In reality, I was only able to do this because I am, in fact, SuperKenny. But maybe with the powers of fasting on your side, you can become SuperYou too!

Download this guide for 8 more science-proven and health-enhancing hacks.