Why Women Should Care About Testosterone

For women, the role of testosterone in the body is not always clear. Here is some basic information that every woman should know about this mighty hormone... and why it's not just for the boys.

Testosterone is a steroid hormone that belongs to a class of hormones called androgens. It is produced mostly in the testes of men and the ovaries of women, although small amounts are produced in the adrenal glands as well. Testosterone is best known for its anabolic effects, like building muscle and tissues, helping with protein synthesis, and increasing bone density. Testosterone also has androgenic effects that we often associate with male secondary sex characteristics, i.e. deepening of the voice, development of facial and body hair, and changes in facial bone contours.

Why is testosterone important for women?

For both men and women, testosterone plays a key role in the development and maintenance of muscle mass, strength, energy levels, and bone density. For women in particular, the maintenance of bone density and muscle mass is important, as both of these tend to deteriorate with age. Testosterone may also offer females some more subtle effects, like impacting mood and (here’s the big one) sexual desire. That’s right…the big “T” is linked to the big “O” for women as well as men.

What are signs of low testosterone for women?

Women with low testosterone (low T) may experience decreased libido and persistent fatigue. For athletes in particular, muscle weakness is another frequent complaint. Because testosterone is a hormone, symptoms of deficiency resemble symptoms of depression and other mood disorders. In fact, certain experts argue that misdiagnosis and lack of treatment are common for these reasons. 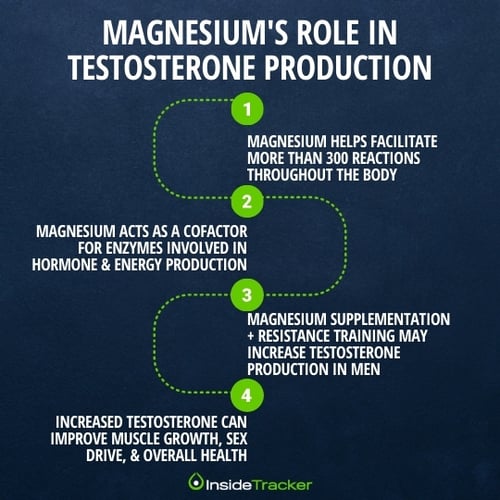 What are signs of high testosterone for women?

Between 4% and 7% of women produce too much testosterone in their ovaries. Some of these women have a pattern of symptoms called Polycystic Ovary Syndrome, or PCOS. This diagnosis is important for women, as PCOS can lead to infertility and other problems. Another possible effect of high T in women is excessive hair growth in unwanted areas, known as hirsutism. (Yes, there’s a scientific name for those pesky chin hairs you have to pluck.) Other signs include: acne, excessive perspiration, frontal balding, and deepening of the voice.

What to do if your testosterone is too high

The role of testosterone in the female physiology continues to be studied by scientists and researchers. There are still many questions you may have. For example: does getting your upper lip threaded or being moody from time to time mean your testosterone is out of whack? Probably not, but there’s only one way to find out! InsideTracker’s Ultimate Plan lets you test a wide range of blood biomarkers plus important ratios, including free and total testosterone, SHBG, and cortisol, and gives you individualized reccomendations based on your age, gender, ethnicity, activity levels, and goals.