Got fatigue? Increase Your Ferritin! 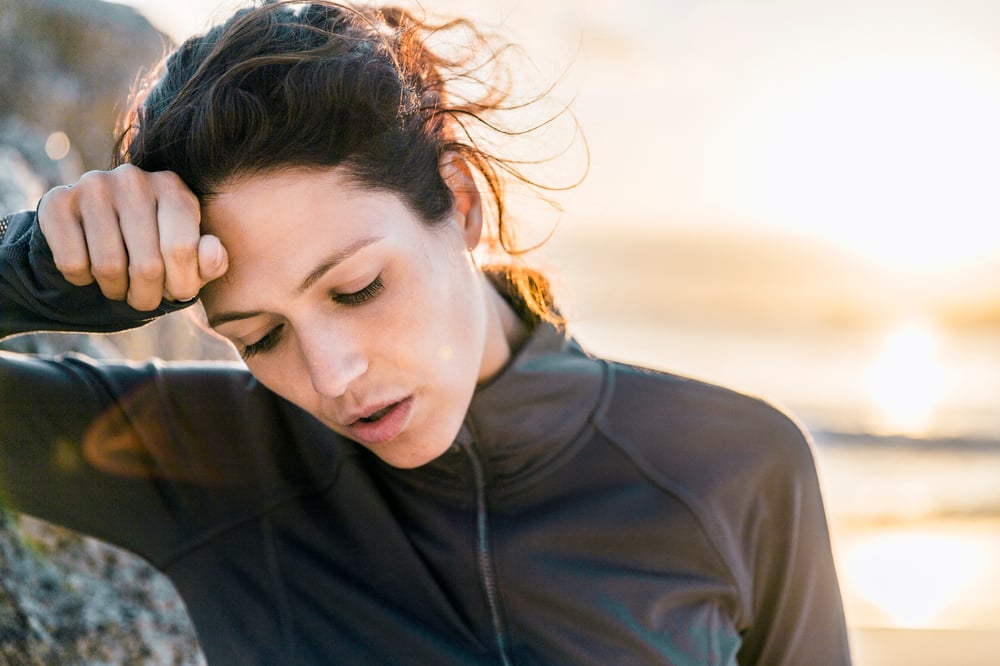 Ferritin levels are important for everyone. Whether you’re male or female, an avid exerciser or a couch potato. If your ferritin levels are too low, you may feel fatigued and run down. Fatigue can often be linked to inadequate iron in the blood. And since ferritin is a marker of long-term iron intake, it's perfect for determining whether that worn-down feeling can be linked to your diet. Here's how analyzing the ferritin levels in your blood can help increase your energy levels.

What is ferritin, and why is it important?

Ferritin is a type of protein that binds to iron. In fact, most of the iron that is stored in the body is bound to ferritin, which makes it a good marker for how much iron you have. Iron is an essential mineral that is a part of the protein hemoglobin, which is found in all the body’s red blood cells. Hemoglobin works to supply the muscles and other organs with enough oxygen, as well as to help the body to convert carbohydrates and fat into energy. Maintaining optimal levels of iron is important for athletes and non-athletes alike because iron plays the following important roles in the body:


Why do low ferritin levels make you tired?

If you’re deficient in iron, you probably have lower levels of red blood cells and hemoglobin. As a result, your blood can carry less oxygen to your muscles and brain, and this can negatively impact performance and overall wellbeing. Since red blood cells play a critical role in transporting oxygen to cells, tissues, and organs throughout your body, a lack of oxygen can make you feel lethargic and weak. Low levels of iron in the blood can decrease your body’s ability to use energy efficiently during exercise or normal physical activities. Symptoms of iron deficiency can include frequent injury, a weakened immune system, chronic fatigue, irritability, and a high exercise heart rate. If you’re an athlete who wants to keep your body energized throughout an athletic event, you need to maintain your iron levels so that you don’t become fatigued too quickly! Even if you’re not an athlete, people with ferritin deficiency may feel tired and weak, which can result in decreased levels of concentration. 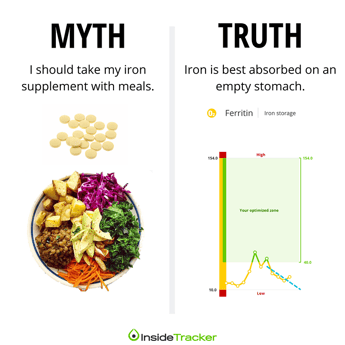 Tell me how much iron I need!

Your recommended dietary allowance (RDA) of iron depends on your age and gender. But those values don't take into account your acute or long-term iron status—two people of the same age and gender with different blood levels of ferritin, for example, should consume very different amounts of iron each day. InsideTracker will use your current blood levels to calculate the amount of iron you need based on your age, gender, ethnicity, and athletic activity.

Certain people are at risk of iron deficiency

Three groups of people face increased risk of iron deficiency: athletes, women below the age of 50, and vegetarians. Athletes tend to deplete iron at faster rates than non-athletes, which can explain why nearly twenty percent of all recreational athletes are anemic (which means they have low ferritin and low hemoglobin) and a third are iron deficient (which means they have low ferritin).

Athletes: Your body loses iron during heavy training periods through sweating, running, and the gastrointestinal bleeding that can sometimes follow intense workouts. So, it’s very important to watch your iron intake to avoid plateauing during an athletic event.  Athletes with low levels of iron should raise their blood iron level, which consequently increases the amount of oxygen their lungs can absorb (known as their VO2max) and their anaerobic capacity.

Pre-menopausal women: Women are at an increased risk for depleted iron levels because of the hemoglobin that is lost in blood during menstruation.  In particular, female athletes are three times more likely to be anemic than non-athletic women.

Vegetarians/vegans: People who exclude meat from their diets are also at risk of iron-deficiency because the iron in plant-based foods (non-heme iron) is harder for the body to absorb than the iron in animal products (heme iron).

What to do to increase iron stores in your blood

There are two types of dietary iron: heme and non-heme. Meat, especially red meat, is the best source of heme iron. When we eat meat, we consume the blood proteins and the hemoglobin that are contained in the body of the animal. In contrast, non-heme iron comes primarily from plants. Non-heme iron actually comprises the majority of the iron that we consume in our diets. Rice, wheat, oats, nuts, fruits, vegetables, beans, and fortified processed foods are typical sources of non-heme iron.

Heme iron is typically absorbed at a higher rate than non-heme iron, which means that the body more easily absorbs iron from animal products than iron derived from plant foods. If you’re a vegetarian, keep in mind that the absorption rate of the heme iron from animal-based sources ranges from 15-35 percent, compared to 2-20 percent absorption of non-heme iron. Therefore, vegetarians may need to consume twice as much dietary iron as meat-eaters to absorb an adequate amount of iron each day.

There are many good sources of non-heme iron. Dark leafy greens and dried beans are among the best vegetarian sources of iron. Many breakfast cereals and bread products are fortified with iron, so make sure you’re eating plenty of those, especially whole-grain foods! InsideTracker has a vegetarian option and will recommend a variety of veggie foods that can fulfill your iron needs. 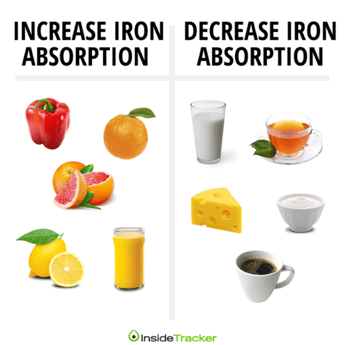 You can also consider taking an iron supplement, but if you do, be sure to take it with a food or beverage that is high in vitamin C (such as orange juice!) to increase absorption. However, it’s important to remember that the amount of iron supplement that is needed varies depending on your blood analysis results, plus your age, gender, ethnicity, and athletic activity. Regardless of whether or not you eat meat or take a supplement, it’s important to know your ferritin status so that you have enough energy to get through the day. InsideTracker blood analysis can tell you if you need to increase your consumption of dietary iron, so get yourself checked today!