The Coffee Controversy: How Java Affects Aging and Health 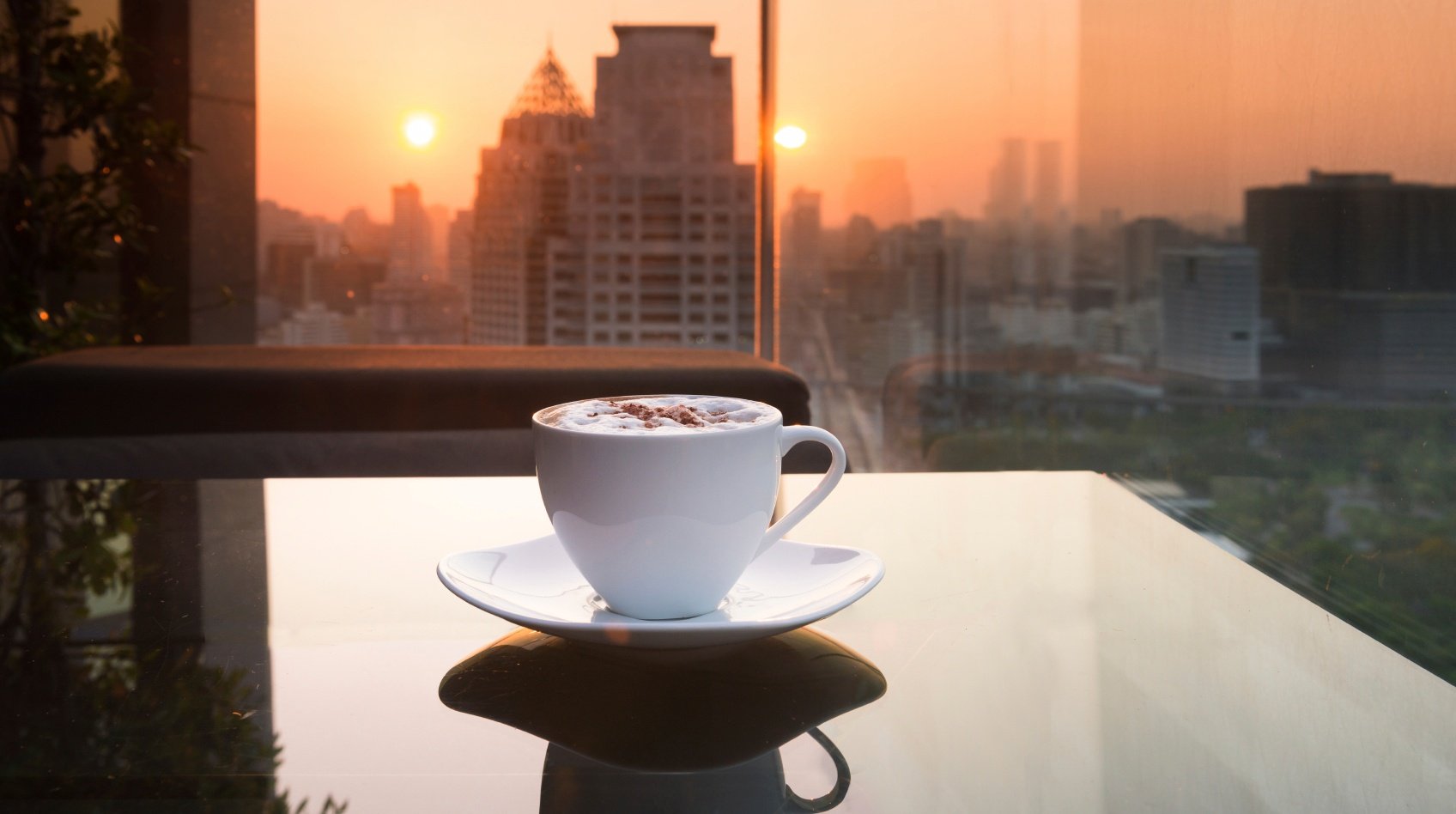 The relationship between coffee and health has been steeped in scientific controversy for years. Scientists used to think that coffee was just a short-term boost in energy with long-term health consequences. But, recent research indicates that not only is coffee safe to drink, it can actually help you fight aging, possibly lower blood sugar and support a healthy liver.

In this blog post, we'll straighten out all the research for you and outline how you can use blood data to get the biggest boost from your daily cup of Joe.

Coffee controversy: is it healthy or not?

Clearly, people like coffee: it’s affordable, accessible, and provides that nice boost you need to power through the day. But for decades, its impact on the human body has remained controversial.


This is partly because one cup of coffee contains about 80 mg - 170 mg of caffeine, a stimulant that improves attention span but may lead to some adverse health effects if consumed in excess.5 In the 1970s and '80s, preliminary research on animals indicated that consuming coffee containing caffeine could lead to nasty health conditions such as cancer, heart disease, and birth defects. 6

However, there's good news: the bulk of modern-day research suggests that coffee consumption is not only safe for most people who enjoy its taste, it may actually help your health in a variety of ways!

Can coffee add years to your life?

Coffee may help you fight aging. In a 13 year-long observational study, published in the New England Journal of Medicine, medical researchers examined the association between mortality and coffee consumption. They used data from a large-scale study from the National Institutes of Health, called the AARP Diet and Health Study, that included over 402,260 subjects (about 57% men and 43% female). All subjects were between 50 - 71 years of age at the beginning of the study in 1995. The researchers noted how many cups of coffee each participant drank per day and then followed them until 2008. 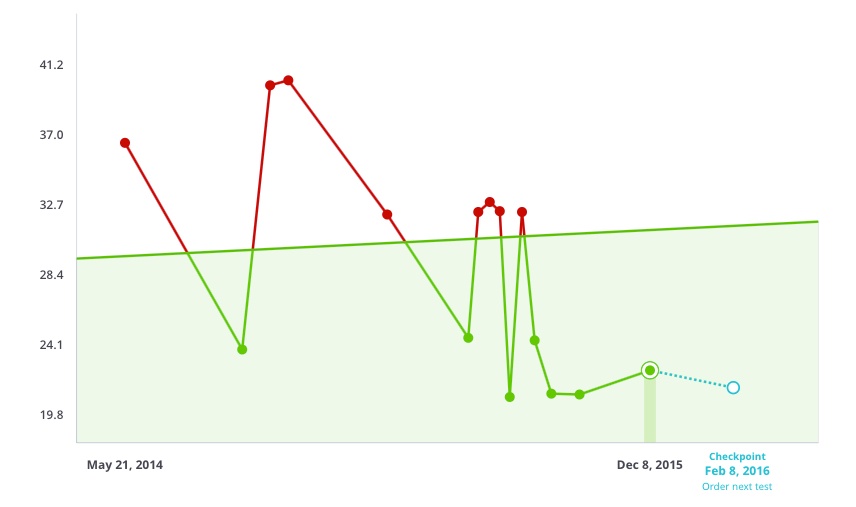 InnerAge is a feature and a blood panel available from InsideTracker. The chart above illustrates how choices and behaviors influence one's biological aging, versus one's chronological "Inner" age.

In 2008, the researchers followed up with the subjects and noted that about 13% had died. After adjusting for tobacco-smoking status and other variables, researchers observed a significant association between coffee consumption and reduced mortality. 7 This means that as someone drank more cups of coffee per day on average, they were less likely to die. 7 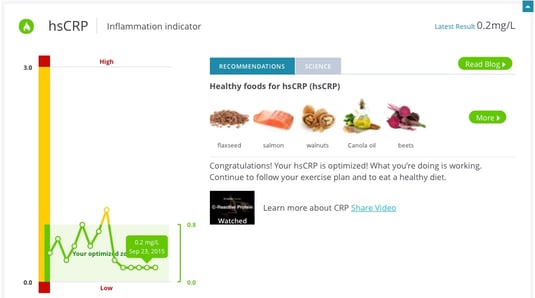 Because of their promising data, the researchers stated that “coffee consumption was inversely associated with total and cause-specific mortality.” However, because they could not clearly adjust for all variables, they also emphasized that “whether this was a causal or associational finding cannot be determined from our data.” 7

The findings of this study are supported by several others. Researchers from Harvard School of Medicine and Public Health noted a significant, inverse association between coffee consumption and mortality in three different studies with a total of 300,000 subjects.

The Harvard researchers concluded that “higher consumption of total coffee, caffeinated coffee, and decaffeinated coffee was associated with lower risk of total mortality.” 8 They also observed something else interesting: there was no significant difference between regular and decaf coffee and risk of death!

These research studies are promising. However, it's important to keep the findings in perspective. All of these studies were observational. This means that they cannot establish a clear causal relationship as to why coffee consumption led to lower death. Additionally, there are many other nutrition and lifestyle interventions that fight aging and may possibly extend life. Still, such studies do provide compelling evidence that your habit of drinking one or two (or four) cups of coffee per day might have a beneficial effect on the aging process.

Key Takeaways: Several observational studies show an inverse association between coffee consumption up to five cups per day and risk of death. However, a clear causal relationship between coffee and longevity cannot be established.

Recommendations: If you drink coffee or want to start drinking it, use InsideTracker’s InnerAge to see what impact it has on aging-related biomarkers such as C-reactive protein (CRP) and glucose. If you don’t want to drink coffee or can’t because it has a negative impact on your body, feel free to check out many of our other anti-aging interventions in our recommendation engine, included with each test.

Can coffee lower your blood sugar?

In 2009, the American Medical Association published a meta-analysis assessing coffee’s impact on the incidence of developing type II diabetes. Typically, type II diabetes is defined as having a blood glucose greater than 125 mg/dL. InsideTracker monitors levels of blood glucose in its Ultimate and InnerAge panels and serves as a valuable indicator for aging, sleep quality, and even cognition.


The researchers discovered that as you drink more coffee, your risk of developing diabetes decreases. Drinking an additional cup of coffee per day led to a 7% reduction in the risk of developing type II diabetes. As a result of these findings, the researchers stated that “high intakes of coffee, decaffeinated coffee, and tea are associated with reduced risk of diabetes.” These findings are in line with several other studies. 10 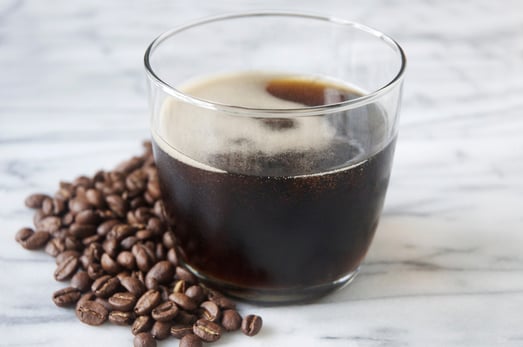 It is important to put the findings of this study in context:

Recommendations: If your blood sugar levels are elevated, consider adding a cup or two of black coffee a day and use InsideTracker to monitor your glucose.

The power of coffee and liver health

Detoxification diets, often shortened as “detox diets”, are all the rage now. Celebrities and doctors advocate exotic juices and teas to “cleanse” the body of harmful substances called “toxins." While most health claims about these products are unproven, some recent evidence suggests that the coffee might actually help the body break down toxins.


In 2014, researchers assessed data on 27,793 subjects age 20 or older from a study called The U.S. National Health and Nutrition Examination Survey. The subjects had been monitored for 11 years. To measure the degree of toxicity, scientists collected data on three enzymes produced by the liver: alanine aminotransferase (ALT), aspartate aminotransferase (AST), and gamma-glutamyl transaminase (GGT) — all of which are measured in InsideTracker’s Ultimate Panel, by the way. Higher levels of these enzymes indicate greater levels of toxicity in the blood.

Researchers discovered that drinking at least three or more cups of coffee per day resulted in an inverse relationship with abnormal levels of liver enzymes. This means that coffee drinkers, overall, were less likely to have abnormal liver enzymes, most likely due to lower levels of “toxins”. These results were strongest for individuals who drank at least an average of three cups of coffee per day. 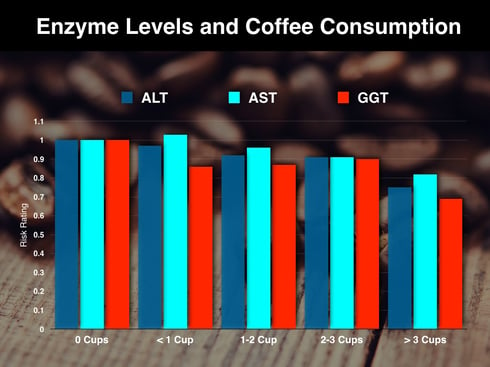 Researchers surmised that a combination of several of coffee’s many chemical compounds, such as polyphenols, were responsible for the lower levels of liver enzyme activity. Interestingly, there was no difference in effects observed in caffeinated and decaffeinated coffee. Because of their findings, the researchers stated that “higher intakes of coffee, regardless of its caffeine content, were associated with lower levels of liver enzymes.”11

Another study on over 100,000 individuals illustrated strong inverse associations between coffee consumption and three liver enzymes, and cirrhosis of the liver, a condition in which the liver functions poorly due to long-term damage. 14 These observational studies on many subjects provide reasonable evidence that consuming coffee can help with detoxification.

Recommendation: If your levels of liver enzymes are high or you want to go on a detox cleanse, ditch the unproven juice cleanses and consider drinking up to three cups of coffee a day. Make sure it is unfiltered and monitor your liver enzymes (and personal health) to see how it affects you.

Watch out for cholesterol

Despite coffee’s many health benefits, there is one thing to watch out for: drinking too much coffee can increase levels of fat molecules called triglycerides and LDL cholesterol (often referred to as the “bad cholesterol”). High levels of these molecules in the blood can damage heart health and lead to other chronic diseases. All of these molecules are critical indicators of health and measured by InsideTracker.


A recent meta-analysis of 12 research studies  showed that, on average, drinking coffee for at least 6 weeks led to small but notable increases in triglycerides, total cholesterol, and LDL cholesterol. These increases were greater in subjects that already had high levels of lipids and in individuals who consumed more coffee. The researchers collectively summarized these findings by stating “the intake of coffee, especially unfiltered coffee, contributed significantly to the increase in LDL cholesterol and triglycerides, and the changes were related to the level of intake.”15

So, does this mean you should drop coffee altogether? Not necessarily. Some research indicates that coffee contains substances called dipterines that increase cholesterol. 16 Dipterines can easily be removed by using any filter, including of the paper variety.

Coffee used to be demonized as an unhealthy drink that gave short-term energy but long-term drawbacks. But research says otherwise, and earlier this year the U.S. Department of Agriculture stated that “coffee can be incorporated into a healthy lifestyle.” 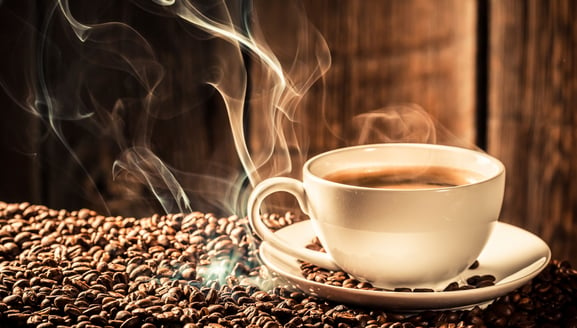 The origins of coffee

Coffee is prepared by roasting and brewing coffee beans. Interestingly, these aren’t actual beans – they are seeds from the berries of the Coffea plant, which has its origins in subtropical Africa and South Asia. The two most commonly prepared coffee plants are the more refined Arabica and the earthy, strong robusta. [1]

The first documented use of coffee is in the Sufi Shrines of Yemen and in Medieval Ethiopia during the 15th century. 1 This makes it relatively "newer" than its main competitor, tea, which traces its origins back to thousands of years earlier. 2 By the end of the 16th century, coffee was widely consumed all throughout the Islamic world. In 1615, Italian merchants introduced coffee to Europe and it eventually caught on like wildfire in the Western world. 1 It was cheaper than tea, more caffeinated than chocolate, stimulated liveliness and humor but didn’t leave people with a hangover like wine. You can learn more about coffee’s interesting history by visiting the James Ford Bell Library website (University of Minnesota).

Even though tea had a few thousand years of a head start on coffee, they are now both the two most widely-consumed beverages, after water. About 2.25 billion cups of coffee are consumed worldwide per day. 3 According to the International Coffee Association, Finland has the highest coffee consumption per person; the average person there buys 22 pounds of coffee per year. The National Coffee Association pegs the United States is the overall biggest consumer of cup of Joe, however. About 54% of Americans ages 18 and older drink coffee at least once a day. The average American adults drinks 3.1 cups of coffee per day, which adds up to a total of 66 billion cups per year! 4

Recap: here's how to get the most out of your Joe

Your morning Joe may help your InnerAge, but what impact do the rest of your biomarkers have on your health? We've created this handy biomarker eBook for reference... and it's yours to download, for FREE!