Avoiding the Crash: How Monitoring Iron Status Can Save Your Season 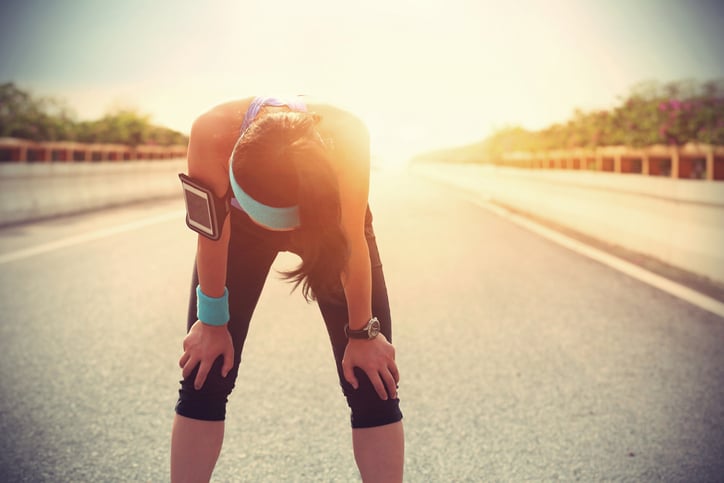 Iron deficiency is sometimes a silent assassin, a quiet problem that creeps up and can kill your season if you are not vigilant. Yet with all of the science published on athletes’ iron deficiency and the current statistics on rates of low ferritin with professional athletes, the awareness among the athletic crowd is still incredibly low. One would think that only the regular joes have problems and the world’s elite would be protected from the common and seemingly mundane nutrient deficiencies, but the truth is that athletes are human and many problems are human issues, not unique to athletes.  Iron status is essential to extracting oxygen from our lungs and transporting it to the rest of the body, and a few errors in nutrition and training can render a champion crippled if one is not careful.

Are athletes really at risk for iron deficiency?

Elite athletes are special and at the same time like you and me. Athletes may have abilities we don’t, such as the gift of climbing mountains on a bike or dunking a basketball in traffic late in a playoff game.  Professional athletes are human, and they are sometimes eating, drinking, and even training inappropriately and find themselves with very mortal problems as well. The study indicated that 27% of the athletes at the end of a season became absolute deficient, an alarming fact if one is sacrificing and training for months for a big race or championship. Knowing that nearly a third of athletes are at risk for iron deficiency is like playing a game of Russian Roulette, only this time one adds another bullet to the mix. 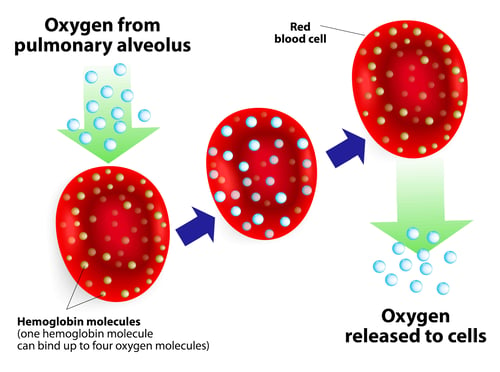 Preventing iron deficiency is straightforward; get tested and get informed and leave the hope and guesswork out of the winning equation. Ferritin, a protein that helps you store iron safely in your blood, is a nutrient that supports another important protein, hemoglobin. Our blood is beyond the river of life in our body, it’s a sophisticated transport system of both nutrients and waste.  Attached to blood cells is hemoglobin, a protein that carries oxygen, and is a primary target of improving performance with endurance training. If the body doesn’t have the right amount of nutrients, the body simply can’t construct the materials to build a better aerobic engine. Every person is born with genetic gifts and limitations, something we can’t control even with the best training. What one can control is how well we train and what we do with nutrition. A popular school of thought is the idea of improving performance by searching for marginal gains, small choices and interventions that search for the elusive last 1% of performance. The reality is most, including professionals, need to work on the first 99% and avoid ruining seasons from meaningful gains from the foundational basics. If the first 99% is taken care of, by all means chase the last 1% to get the results you are looking for.

An inconvenient reality is that a sound nutrition program or even supplementing with iron is only an estimation of iron intake. Checking labels or popping iron pills are reasonable ways to ensure one is getting enough iron, but the real score is what is actually stored in the body rather than a tabulated count on a smartphone app or the back of a supplement bottle. Countless times I have seen first-hand how even the most talented athletes are still deficient with ferritin, even with an honest effort and sports nutritionist working with them full time.  The reason why athletes don’t get enough stored iron is multifactorial, but three key variables determine the final fate of iron status. 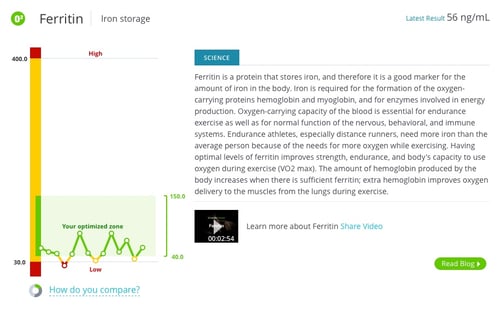 From the InsideTracker blood work page above, one can see the rise and fall of ferritin stored in the body. The reason for the variance is very simple, a typical diet is more complex than a list of foods recorded on a food log. Food logs and many apps are about totaling numbers like an itemized bill, not accounting for the interplay of chemical reaction of real nutritional biochemistry. It would be nice if adding up the numbers on the label would let you compute what the body stores, like a bank transfer, but that is not the truth. Food, even in isolation, is more than a table of nutrients and calories, but an ingredient to a dietary experiment with many possible outcomes. Healthy and common foods have components that can inhibit absorption such as phytates and oxalates (found in grains and fibers of fruits and vegetables); these may reduce ferritin levels. Coffee and tea, two beverages that have health benefits, contain polyphenols and tannins that inhibit absorption as well. Even supplements taken at the wrong time or wrong dose can interfere with iron absorption, making the dogma of just getting enough dated and oversimplified. All of the nutritional factors are tough to juggle and have been already broken down into more detail here, so it make sense to talk about a factor that is not being talked about enough, the role of training and inflammation.

Hepcidin: The gatekeeper to ferritin during intensive training

Even the most sophisticated diet will fail when training is not properly implemented, because a hormone that is rarely talked about plays a major role when the body is in heavy training. Hepcidin is triggered when normal but high levels of inflammation occur and signal to the gut that it needs to close the door on absorbing iron. While a few theories exist as to why this happens, the real takeaway is that nutrition programs are limited when training variables can impair the digestion system. The body is not artificially segregated into compartmentalized chapters in a book. The human body is integrated seamlessly, and this is why many world class athletes slip through the cracks when sport specialists are isolated into separate departments. 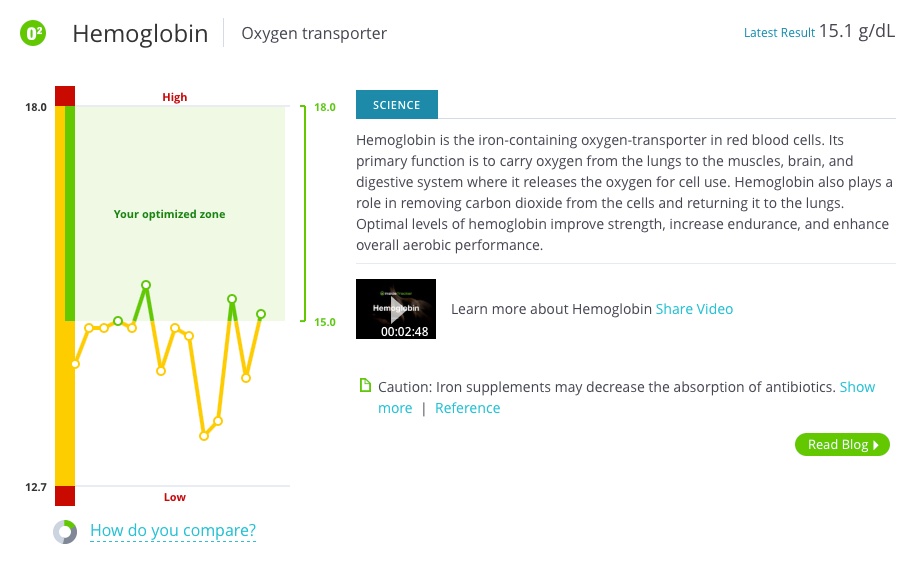 Interpreting the Hemoglobin chart, knowing what we do know with hepcidin, raises some interesting questions, but let’s understand what you need to know about hemoglobin numbers first. A sensible perspective on hemoglobin is to keep the number in the ballpark of the athlete’s optimal zones rather than above disease or normal ranges. Training  errors and imperfect nutrition can interfere with ferritin absorption, so what is the solution here?  Taking more iron pills is the wrong and dangerous path, leading to iron overload, a toxic condition. A wise approach requires a step back and looking at the big picture with training and nutrition together by looking at other biomarkers as well. Heavy training will show up in symptoms and with poor training numbers, and with other biomarkers and their composite scores like the all-important Free-Testosterone-to-Cortisol ratio. The more data from training and physiological monitoring one has, be it from TrainingPeaks or other sport training software, the more likely one can connect biomarkers to performance. A pragmatic approach is looking at hemoglobin and ferritin values and ensuring they are in appropriate ranges of one’s personalized optimal zone consistently. It is true that athletes will manage amazing performances at times, but over a season the harsh reality of biology and time will paint one into a losing corner.

Setting up your own screening program

Athlete monitoring is exploding in professional and Olympic sport, but reducing the risk of a crash doesn’t require a dream team of experts; just a proactive attitude. The typical recreational runner should screen every few months to ensure ferritin is not falling into deficient levels. Everyone should screen, not just endurance athletes. Team sports need a great aerobic engine to perform well late in games and non-athletes deserve waking up feeling energized from sleep not wondering why they are still tired. More advanced athletes and serious enthusiasts can take testing to the next level with more frequent screening and more extensive blood panels, but committing to the frequency of an oil change is a great start. The same process of consistently screening should be employed with all nutrients in the body as well, not just ferritin. With the research on the prevalence of absolute iron deficiency currently hitting more than a 1 in 4 with both male and female athletes in some research studies, not screening  consistently is an accident waiting to happen.