Could a simple pill be the solution to our aging problems? NAD+ boosters have risen in popularity as laboratory research continues to shed light on their promising effects on longevity and aging. But have we really discovered the fountain of youth? While cell culture and animal research are encouraging, the results of human studies will always trump these laboratory outcomes. And with multiple clinical studies already published or underway, let’s dive into the current research in humans. 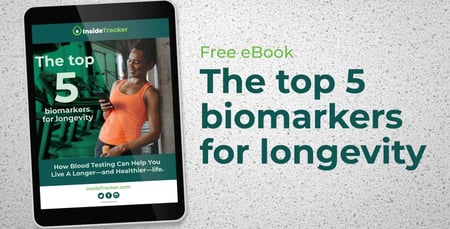 Low NAD+ is a hallmark of aging, but NR and NMN supplements may help

To fully understand the science, we must start with the star of the show, nicotinamide adenine dinucleotide or NAD+. NAD+ is a molecule that acts as a coenzyme in many critical processes in our body, including cellular energy production, DNA repair, and sirtuin activity (enzymes involved in aging). Without NAD+ acting as a coenzyme, these processes simply cannot occur and life would not exist. Interestingly, mounting evidence suggests that NAD+ levels decline with age—a change that scientists now consider a hallmark of aging. Lower NAD+ levels are also responsible for many age-related conditions like cardiovascular disease, neurodegenerative diseases, and cancer.[1]

So, in an effort to stave off these age-related changes, can we boost NAD+ levels by taking NAD+ supplements? Not quite. NAD+ in supplemental form has very poor bioavailability, meaning it doesn't have much of an effect when introduced to the body. But, NAD+ has several precursors or intermediates—molecules that transform into NAD+ through enzymatic reactions. Scientists have studied two such intermediates, nicotinamide riboside (NR) and nicotinamide mononucleotide (NMN), more extensively than others, and the research is encouraging. Several studies indicate that supplementing with these precursors can increase NAD+ levels and prolong the lifespan of yeast, worms, and mice.[2-4] Furthermore, other animal studies show that boosting NAD+ can also improve muscle generation, cardiovascular function, and glucose metabolism.[4-6] But it's critical to remember that findings in animal studies don't necessarily translate to humans. So let’s examine the clinical research currently published. 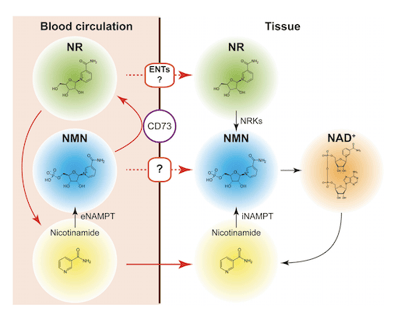 Of note, in human studies, research is much farther along for NR supplementation compared to NMN. One reason for this could be due to the way the body converts these intermediates to NAD+ (see Figure 1). Research suggests that cells can uptake NR directly from the blood, where it is then converted to NMN and then NAD+. However, there are two proposed mechanisms for the uptake of NMN in living organisms.[1] One is that NMN must first convert to NR to enter cells where it is then changed back to NMN and subsequently into NAD+.[2] The other is that NMN may enter cells directly through an unknown transporter.[1]  More research is needed to fully understand these mechanisms, especially in humans.

Clinical research examining the bioavailability of NR in supplemental form began in 2016. ChromaDex, a company that produces the NR supplement NIAGEN®, sponsored the first published study conducted in humans. In this small crossover study, twelve healthy individuals were given three single doses of NR. Each subject completed each dose (100mg, 300mg, and 1,000mg) with a 7-day washout period between each one. The results showed that NR was bioavailable in supplement form and increased NAD+ in a dose-dependent manner—higher doses of NR resulted in more NAD+ present in the blood.

More than a year later, two additional studies on humans were published. The first one, released in November 2017, was a self-funded study by supplement company Elysium Health, Inc. examining the safety and sustainability of Basis, its own supplement. Basis is a combination of NR and pterostilbene (PT), a polyphenol found in blueberries linked to anti-aging. The randomized, double-blind trial included 120 healthy subjects between the ages of 60-80 years old. They were assigned to one of three groups in which each completed eight weeks of daily supplementation: (1) a placebo group, (2) a dose of 250 mg NR + 50 mg PT, or (3) a dose of 500 mg NR + 100mg PT. The lower-dose group experienced a 40% increase in NAD+, while the double dose group's levels rose by ~90% (as seen in Figure 2). No adverse side effects were noted, and the researchers concluded that NR safely and effectively increases NAD+ levels. 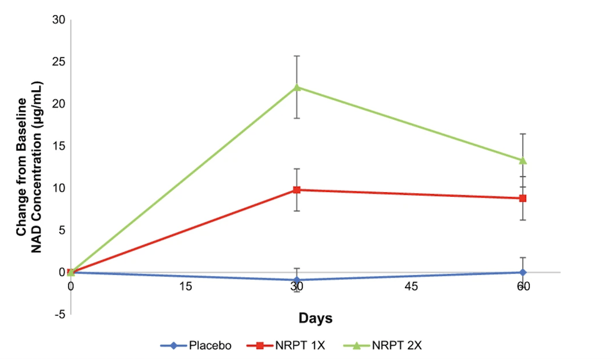 A month later, a much smaller study showed similar results. Eight subjects took increasing doses of NR for eight days. Doses started at 250mg of NR on days one and two, then doubled every two days ending with 2,000mg on days seven and eight. Their blood was analyzed at baseline on day nine. Researchers found that NAD+ levels increased in all subjects, ranging from 35-168%.

In March 2018, a randomized crossover trial examined both the tolerability of NR supplementation in healthy adults and multiple secondary outcomes. ChromaDex also partially funded the study and provided the study pills. The study included 24 lean and healthy men and women between the ages of 55-79 years old. Half of them were placed in Group A, where they received a placebo for six weeks before crossing over to receive 1,000mg of NR capsules for the remaining six weeks. Subjects in Group B received the NR supplementation first, followed by the placebo. NR supplementation raised levels of NAD+ by ~60% compared to the placebo. Furthermore, people with lower blood cellular levels experienced a greater increase in NAD+ levels. The researchers also found that NR generally lowered blood pressure and reduced aortic stiffness, but these findings were not significant. Several other secondary outcomes did not improve, including physical activity, body fat, markers of exercise performance, or glucose and insulin regulation.


In August 2018, a study specifically explored NR’s effect on insulin sensitivity and other metabolic parameters in obese, insulin-resistant men. Forty men, between the ages of 40-70, were randomized into two groups. The experimental group received 2,000mg of NR per day for 12 weeks, while the control group received a placebo. The experimental group experienced no changes in insulin sensitivity and glucose metabolism. No differences in secondary outcomes were observed either, including resting energy expenditure, lipid metabolism, or body composition.

Last year, researchers used Elysium Health’s drug EH301 (essentially a clinical name for Basis) to test its efficacy on the progression of ALS. In this randomized control trial, 32 participants with ALS were given 1200mg of EH301 or a placebo for four months and encouraged to follow a Mediterranean-style diet. The group taking EH301 showed significant improvements in ALS symptoms, pulmonary function, muscular strength, and muscle-to-fat weight ratio. The researchers concluded that EH301 significantly slowed the progression of ALS and improved other health outcomes associated with ALS. Elysium Health, Inc. has announced the initiation of several more clinical trials, including the effects of Basis on fatty liver, muscle metabolism and exercise performance, and in preventing Acute Kidney Illness.


In 2019, another group of researchers evaluated NR’s availability in skeletal muscle in older adults. Over 21 days, twelve 70 to 80-year-old men received a total of 1000mg of NR supplementation (NIAGEN®) daily in this randomized control crossover trial. The results showed that NR increased NAD+ in muscle and also exerted anti-inflammatory properties.

The conclusion on NR safety and efficacy in humans

Based on this research, we can conclude that NR supplements are generally safe to take and will most likely increase your NAD+ levels, but the effects of increased NAD+ remain unclear. Furthermore, the study periods were short, so we still don't know the long-term effects of NR supplementation. With that said, many more studies with NR are underway—Chromadex alone claims to have over 100 preclinical trials in the works. For more information on current studies, you can search “nicotinamide ribose” at clinicaltrials.gov, or click here. 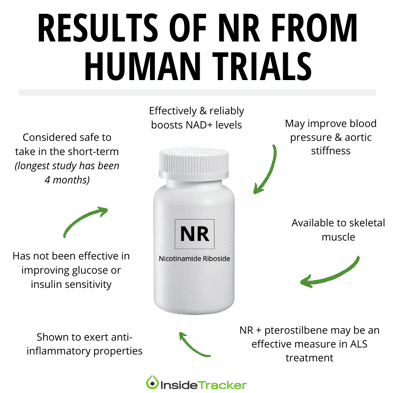 Nicotinamide Mononucleotide (NMN) research is still in its infancy

NMN has gained a lot of attention lately, especially after the release of David Sinclair’s book Lifespan. In his book, the Ph.D. and longevity scientist discusses his research examining NMN, particularly in mice. He has been very open about taking NMN, but has also made it clear that he has no opinion on whether anyone else should take the supplement. Similar to NR, the research in animal studies looks promising, but the first study in humans was only published this year. Phase I of this study merely assessed the safety of NMN supplementation, and therefore NAD+ levels were not even measured. Ten healthy Japanese men received a single dose of 100mg, 250mg, and 500mg of NMN on separate occasions. All quantities were tolerated without adverse side effects. The authors concluded that up to 500mg of NMN is safe in healthy men. For phase II, researchers will reportedly examine the efficacy of NMN, as well as appropriate dosage and frequency; however, it remains unclear if this study has started.

Other ongoing human trials (like this one) will examine the safety and effects of NMN in older adults, while this one will investigate NMN’s impact on cardiovascular and metabolic functions. But, similar to NR, research is preliminary and more studies are needed to draw further conclusions.

A summary of all the research

Diana is a Content Strategist and Team Nutritionist at InsideTracker. As a Registered Dietitian and self-proclaimed "biohacker," Diana enjoys researching and testing the latest trends and technology in the field of nutrition and aging. You'll often find Diana, completing a 24-hour fast, conducting self-experiments, or uncovering strategies to increase longevity. Follow her on Instagram at @dietitian.diana.