Vitamin D and Sun Exposure: How to Optimize Your Levels

While it's possible to get your daily dose of vitamin D from the foods you eat, very few foods are naturally-rich sources of the vitamin. Instead, your body actually makes most of its vitamin D from sunshine. Known as "the sunshine vitamin,” vitamin D provides several important benefits to our bodies.

But some foods do contain vitamin D! Get 10 vitamin D-rich recipes here.

Why is vitamin D so important?

Spending time outdoors is often difficult for those of us who spend most of our days under fluorescent lights. But the truth is, keeping cooped up indoors all day may be harmful to your health! The bad news is that if you don’t get outside often and expose your skin to the sun, it may result in low vitamin D. Why?

If you don’t get enough vitamin D, it can affect the way you feel and how well you perform, which makes this vitamin crucial for athletes. Specifically, vitamin D helps to:


According to the National Health and Nutrition Examination Survey (NHANES), the majority of Americans are deficient in vitamin D. The recommended daily intake is 600 IU, but if your vitamin D levels are low, you may need to take much more. The only way to know whether your vitamin D levels are adequate is to have your blood levels checked. InsideTracker blood analysis includes vitamin D and will tell you not just whether your levels are normal, but whether they are optimal to promote a healthy body and life. 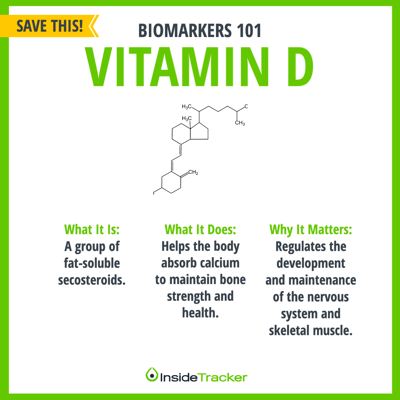 What is important to know about vitamin D production via sun exposure?

Your body naturally makes vitamin D when your skin is exposed to sunlight. The form of vitamin D that you get from the sun is called D3 (also known as cholecalciferol), which is derived from cholesterol. The amount of vitamin D you get from exposing your bare skin to sun is dependent on several factors. They are:

The closer to the equator you live, the easier it is for your body to synthesize vitamin D from the sun’s rays all year round. For instance, if you live at a northern latitude like Anchorage, Alaska, your body would create less vitamin D during the winter than someone who lives in Miami, because Florida has more exposure to UVB rays that are necessary to produce vitamin D.

2) The amount of skin you expose

If you wear clothing that covers most of your skin, you may be at risk for vitamin D deficiency. This also means that people who train indoors during winter months may have to dig into their bodies’ vitamin D stores if they don't consume enough, which further increases their risk for deficiency. Cloudy weather can also be a problem because fewer UVB rays reach your skin on cloudy days.

3) The color of your skin


In the context of vitamin D production, if you have skin type I to III, you produce vitamin D more quickly than if you have skin type IV to VI. A good rule of thumb is to get half the sun exposure it takes for your skin to turn pink to get your recommended amount of vitamin D. After you have exposed your skin for enough time, cover up with clothing and go back into the shade. A dark-skinned person might need 10 times more sun exposure than a lighter-skinned person to produce the same amount of vitamin D.

4) The time of year and day

When the rays of the sun enter the Earth’s atmosphere at a steep angle, UVB rays are blocked. This occurs during the early and later parts of the day, and most of the day during the winter. So, if you want to increase your vitamin D, expose your skin to the sun closer to midday to allow for maximum production. But relying on sunlight during the winter months may not be enough to meet your needs. Read about daylight savings and vitamin D status here.

Americans’ vitamin D levels vary throughout the year, peaking in August and receding around February. In general, vitamin D levels have been shown to be the lowest during the winter months. In the summer, when the Earth rotates, the angle of sun hitting the atmosphere is optimized for vitamin D production because more UVB reaches the places far away from the equator.

It is estimated that we should get more than 90 percent of our vitamin D through daily sun exposure. According to the national Institutes of Health, between five and 30 minutes of sun exposure to your unprotected face, arms, legs or back between the hours of 10 a.m. and 3 p.m. two to three times every week is enough for your body to produce all of the D3 it needs.

Sunscreen can block vitamin D production. f you want your skin to absorb UVB rays that are necessary to synthesize vitamin D3, you can’t wear sunscreen. In fact, studies have found that sunscreens with sun protection factor (SPF) 8 or higher block our skin’s ability to produce vitamin D from sunlight by as much as 95 percent.

However, it’s important not to overdo your sun exposure due to the risk for skin cancer. Because of the dangers of excess sun exposure, you might want to talk to a physician to see if taking a supplement is the right choice for you. In the case of supplements, vitamin D is available in two forms: D2 and D3. Since most steps involved in the metabolism of vitamin D2 and D3 are nearly identical, the two forms have traditionally been regarded as equivalent. While nutritional doses of D2 and D3 are equivalent, however, high doses of vitamin D2 are less potent. For this reason, the Vitamin D Council recommends taking vitamin D3 rather than vitamin D2. In the United States, most over-the-counter vitamin D supplements are D3, but check to make sure.

If you go outside daily and have reasonable exposure to the sun, your vitamin D levels should be fine. But the only way to be sure is to get your blood tested. InsideTracker will measure your vitamin D levels and show you your optimal range based on your age, gender, ethnicity, and athletic activity (via the 25-hydroxy vitamin D test, which is the most accurate way to measure how much vitamin D is in your body), as well as telling you how to improve them if they are out of range. Since so many of us have low levels of vitamin D, it is better to be safe than sorry!