Are You Deficient in Vitamin D? 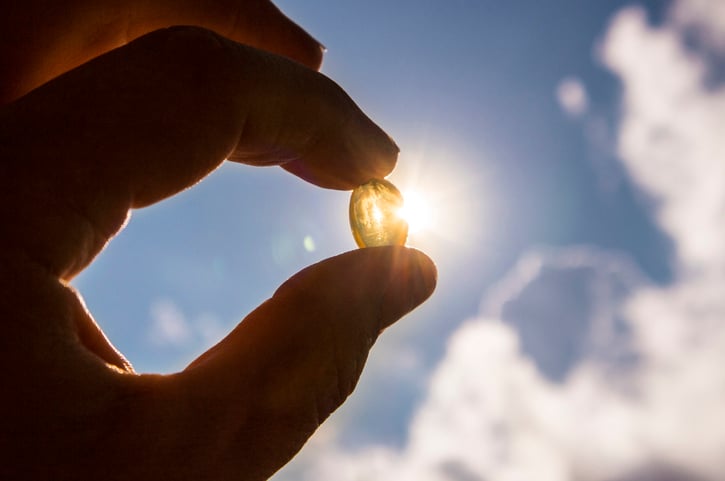 If you live in a temperate climate, or you don’t get outside for at least 15 minutes each day, you may have low vitamin D. Why? Because your body actually makes most of its vitamin D from sunshine, and if you don’t get enough sun, you are likely to have low vitamin D. Known as the “sunshine vitamin,” vitamin D provides several important benefits to our bodies, but it can be difficult to get your daily requirement of the vitamin since few foods are naturally rich sources.

And if you don’t get enough vitamin D, it can affect the way you feel and how well you perform. An InsideTracker blood test showed that an Olympic track cyclist had very low levels of vitamin D. InsideTracker gave this athlete and her coach a set of simple interventions to increase her vitamin D, which helped to make a measurable difference in her performance. It contributed to her success in at the 2012 Olympics in London where she won two silver medals in track cycling!

Why do we need vitamin D?

Vitamin D has several important functions in the body. For instance, vitamin D helps to:


What happens when you have low levels of vitamin D?

According to the government’s National Health and Nutrition Examination Survey, the majority of Americans are deficient in vitamin D. The Institute of Medicine recommends that adults have Vitamin D blood levels of 30-74 ng/mL. The recommended daily intake is 600 IU, but if your vitamin D levels are low you may need to take more. The only way to know whether your vitamin D levels are adequate is to have your blood levels checked. InsideTracker blood analysis includes vitamin D and will tell you not just whether your levels are normal, but whether they are optimal for you.


So, what can happen to your body if you’re deficient in vitamin D? Since vitamin D plays such an important role in our bone health, low levels of the vitamin can result in bone pain, but many people don’t experience any symptoms, which is why it’s so important to get your blood levels checked. InsideTracker Plans include blood tests for vitamin D.

Low levels of the vitamin have been associated with the following conditions:

What are some causes of vitamin D deficiency?

There are many reasons why you may have low levels of vitamin D. Some of these factors are modifiable, but others (like skin color) are beyond your control. However, don’t worry, because  there are ways to increase your levels of vitamin D. Here are some risk factors to look out for:


You don’t consume enough vitamin D from food. If you’re a strict vegetarian, you may want to consider a vitamin D supplement or consuming more foods that are fortified with the vitamin since many of the natural sources of vitamin D are animal-based. Think fatty fish (such as sardines, mackerel, and salmon), egg yolks, butter, beef liver, cheese, and fish oil. Some foods, such as milk, yogurt, cereal, and orange juice, are now fortified with vitamin D.

You don’t get enough exposure to the sun. Your body naturally makes vitamin D when your skin is exposed to the sunlight. If you live in a northern latitude (for instance, Boston receives less sunlight than Miami), or you use a lot of sunscreen (which blocks the UV radiation that you need to synthesize vitamin D), or you wear clothing that covers most of your skin, you may be at risk for vitamin D deficiency. This means that athletes who train indoors during winter months may have to rely on their bodies’ vitamin D stores, which further increases their risk for deficiency. It’s important not to overdo your sun exposure, though, because of the risk of skin cancer.

You have darker skin. The pigment melanin, which is more prevalent in people with darker skin, reduces your body’s ability to make vitamin D in response to sunlight exposure.

You're an older adult. As you age, your kidneys are less able to convert vitamin D into its active form, which increases their risk for deficiency. Certain medical conditions, including Crohn’s disease, cystic fibrosis, and celiac’s disease can affect your body’s ability to absorb vitamin D from foods you consume.

How can you increase your vitamin D?

The three ways to raise your vitamin D levels are through diet, sunshine, and supplements. If you have one of the risk factors listed above, you may find that it is difficult to raise your vitamin D to optimal levels with food alone. Because of the dangers of excess sun exposure, you might want to talk to a physician to see if taking a supplement is the right choice for you. In the case of supplements, vitamin D is available in two forms: D2 and D3. Since most steps involved in the metabolism of vitamin D2 and D3 are nearly identical, the two forms have traditionally been regarded as equivalent. While nutritional doses of D2 and D3 are equivalent, however, high doses of vitamin D2 are less potent.


Can you get too much vitamin D?

Before you start popping vitamins, it’s also important to note that excess vitamin D can cause problems. While your body regulates the amount of vitamin D from sunshine, if you take too much vitamin D in supplements, you may feel weak, nauseous, have poor appetite, and need to urinate frequently. Studies suggest that taking more than 5,000 IU of vitamin D per day in supplements could actually worsen athletic performance. You should know your vitamin D level so that you can choose the correct intervention. (The 25-hydroxy vitamin D test is the most accurate way to measure how much vitamin D is in your body and involves a simple blood sample, which is part of the InsideTracker service.)


To sum it up, if you go outside daily and have reasonable exposure to the sun, your vitamin D levels might be fine. But the only way to be sure is to get your blood tested. InsideTracker will measure your vitamin D levels and tell you how to improve them if they are out of range. Since so many Americans have low levels of vitamin D, it’s better to be safe than sorry!