It’s holiday season and regardless of what you celebrate, one thing is certain: amid the merriment, stress abounds! We’re all familiar with the headaches of crowded airports, panic of last-minute gift shopping and ever present potential for family dramas to play out like crazed telenovelas. Combine all of that with a seemingly endless supply of temptation in the form of alcohol and sugary treats and it’s nothing short of a firestorm for two biomarkers, testosterone and cortisol — and the golden ratio between them!

Just how important are these two biomarkers? The experts here at InsideTracker have been blogging about testosterone and cortisol for some time now, and you can dive more into each here (testosterone) and here (cortisol).

As a quick refresher, these are the key points:

About the Ratios: testosterone to cortisol

A key indicator of athletic performance

The free testosterone to cortisol ratio (FT:C) is highly-valued by sports scientists and fitness buffs as a tool in determining if the body is getting sufficient rest from exercise. In 1995, researchers identified the testosterone/cortisol ratio as an indicator of the amount of strain on the body during exercise. They noted that this ratio “decreases in relation to the intensity and duration of physical exercise, as well as during periods of intense training or repetitive competition.”  Additionally, they noted that the ratio serves as a strong indicator of “physiological strain” during training. In a follow up 2002 paper, they stated that the “ratio between (free) serum testosterone and cortisol, may serve to reveal circumstances which, for the long term, impair the exercise performance.”

Several studies support the theory that FT:C ratio is an indicator of physical strain. In the nine months prior to the 1988 Olympics, a group of researchers tracked six male rowers preparing for the Games. When comparing athletes’ FT:C ratios through the season with their levels prior to training, results showed that periods of intense training led to the biggest decrease in the FT:C  ratios in the rowers. On the flipside, the FT:C ratio increased to its highest levels during periods of lower intensity training.

This suggests that you are likely to see an increased FT:C  ratio after strenuous exercise. So it’s probably best not to have your blood tested right after exercise. However, if the FT:C ratio shows up as low after 24 hours of exercise, you may not be getting sufficient recovery and rest.

A lot of research on the total testosterone to cortisol ratio (T:C) has looked its impact on athletic performance. However, because both testosterone and cortisol are critical indicators of overall health, researchers have begun to assess what else the T:C ratio can tell us.

In one 2005 study, researchers observed that a lower ratio of T:C was associated with greater levels of insulin resistance.  Insulin resistance can lead to a variety of complications such as type II diabetes and heart disease. Additionally, a lower T:C ratio was also associated with an increased chance of developing ischemic heart disease (IHD), a heart condition in which arteries harden and prevent oxygen from entering the heart — and is the leading cause of death in developed nations. 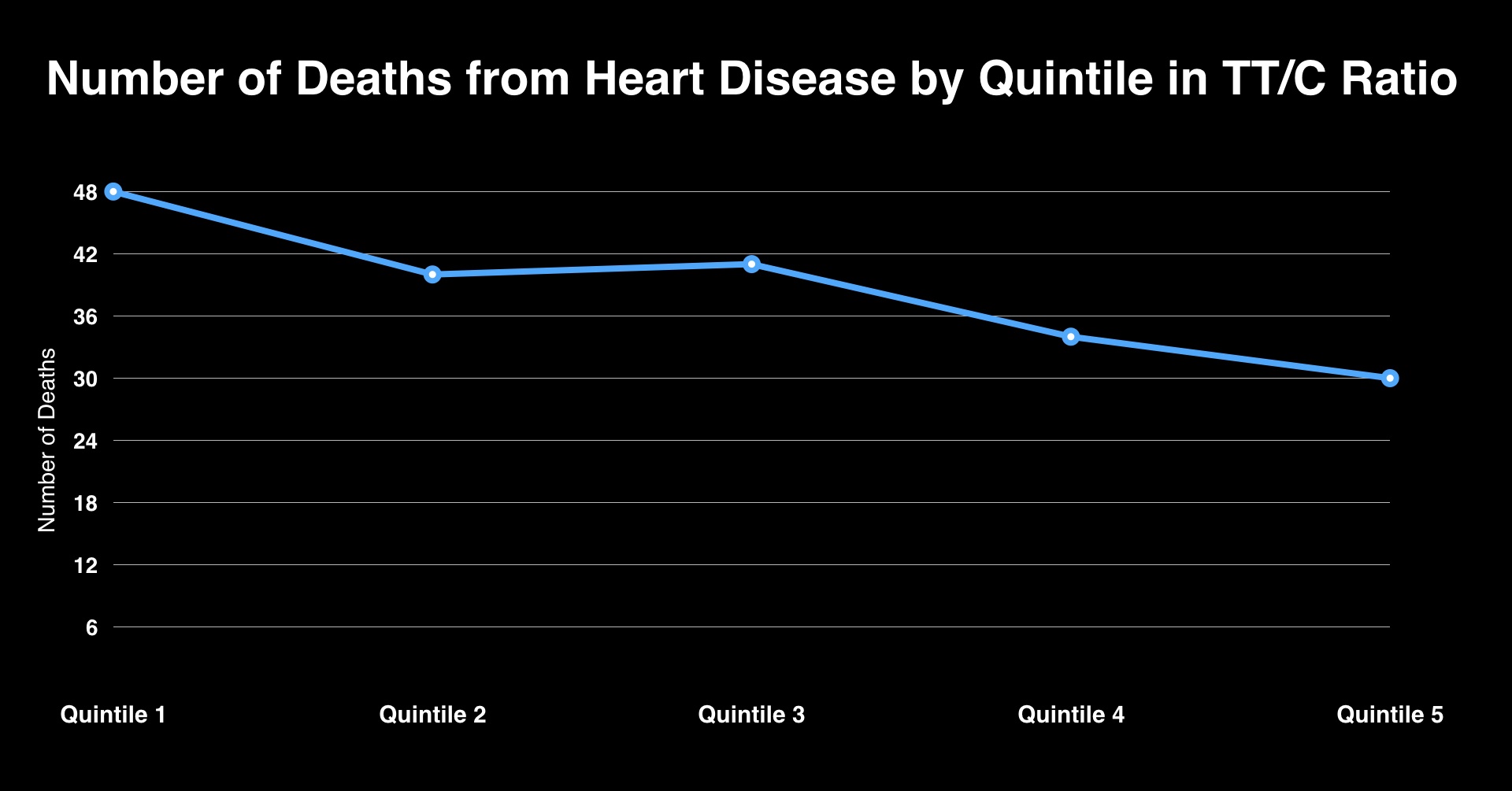 Some researchers have surmised that a lower T:C ratio is associated with a lower heart rate variability (HRV), the difference in time between heart beats. One highly-regarded paper indicates that a lower HRV is associated with an increased chance of heart attack. While more rigorous research needs to be done to evaluate this relationship, it’s safe to say that the T:C  ratio may be a more powerful indicator of heart health than either cortisol or testosterone independently.

Key Takeaways: A low T:C ratio is associated with an increased risk of developing heart disease, the number one killer in the US and developed world. Some researchers indicate that a high total T:C ratio may also be linked with a lower HRV, the variation in time between heart beats, which in turn is linked to increased risk of heart attack.

Recommendations: Measure your T:C ratio using InsideTracker. Then, use interventions such as resistance training that increase the T:C ratio.

Too much of a good thing... can testosterone be too high?

So far, we have only talked about cases where a higher T:C ratio is beneficial to athletic performance and health. However, research in mental health indicates that an unusually high T:C ratio may also have some drawbacks.

Culturally, we associate testosterone with aggression and impulsive behavior. And there is some truth to this: recent research suggests that high testosterone can lead to conditions associated with high social aggression. In a 2009 study it was noted that while high levels of testosterone and low levels of cortisol were independently associated with aggressive behavior in social contexts, the T:C ratio seemed to be a particularly strong indicator of social aggression. Other studies have also indicated this, in both men and women.

The T:C ratio may tell us critical information about mental health that each biomarker alone does not provide. So, what does this research mean for you? Basically, there can be “too much of a good thing.” Even though increased testosterone helps sex drive, athletic performance, and lowers your risk for chronic diseases, if elevated to unhealthy levels it can lead to overly-aggressive behavior and potentially trigger the development of disruptive mental conditions such as psychopathy. Thus, it is critical to monitor testosterone, cortisol, and T:C ratios to make sure they are in their optimal zones. This is especially important if you are currently considering testosterone replacement therapy.

Key Takeaways: Some research indicates that a high testosterone to cortisol ratio is associated with socially aggressive behavior and mental conditions such as psychopathy and antisocial personality disorder.

Recommendations: If you are trying to increase your testosterone to cortisol ratio, use InsideTracker’s blood analysis to make sure that it doesn’t elevate to unhealthily high levels. InsideTracker can provide recommendations to lower your T to C ratio if it becomes too high.

Putting it all together

Science says that cortisol and testosterone each tell us important things about our overall health and fitness. Some science suggests that the testosterone to cortisol ratio (T:C) may unearth even more key information about your body and mental health. More specifically, a low free testosterone to cortisol ratio (FT:T) may tell you that you’re not getting enough recovery after training and increase your risk of developing heart disease. On the flipside, an unhealthily elevated T:C ratio can tell you about the risk of developing a mental health condition characterized by overly aggressive behavior.

InsideTracker allows you to uncover these critical ratios, along with data on many other health-related biomarkers. When you have your data and the proper, research-based interventions, you can start making the most impactful changes to set you on the path to optimal health, performance, and well-being.

Wondering what ALL of your biomarkers mean? We've created this FREE biomarker e-book for reference—it's yours to download!

Like what you see? Don't miss out on future news...

13. Urhausen, A., T. Kullmer, and W. Kindermann. "A 7-week follow-up study of the behaviour of testosterone and cortisol during the competition period in rowers." European journal of applied physiology and occupational physiology56.5 (1987): 528-533.

21. Platje, Evelien, et al. "Testosterone and cortisol in relation to aggression in a non‐clinical sample of boys and girls." Aggressive behavior (2015).