DNA 101: Understanding the Basics and Beyond 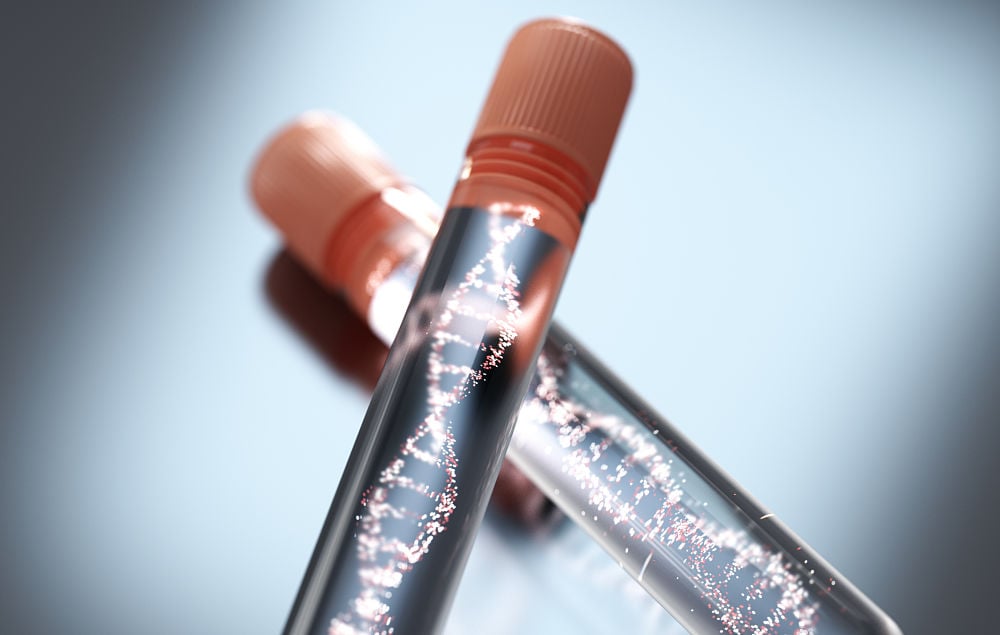 Every wonder why some individuals have an easier time keeping their cholesterol optimized? Or how some people can lose weight easily with exercise, while others need to work much harder? While there may be many possible reasons, one scientifically validated explanation is our genetic predispositions, or potential, for various traits. Sometimes the answers lie within our genome*—our complete library of DNA —the instruction manual for how our body works. And thanks to advancements made in the field of genetics, InsideTracker can now combine our expertise in blood biomarkers with DNA analysis to address some of these issues through more personalized recommendations. To fully understand how, let's start at the very beginning with the discovery of DNA.

The discovery of DNA

Scientists have been studying genetics as early as the 1800s, when Gregor Mendel first offered the theory that living organisms share hereditary traits. After an experiment with peas (which you might have learned in middle school biology), he discovered that dominant and recessive genes were passed down from parents to offspring—a principle that applies to peas and humans alike.


Then, in the 1860s, Friedrich Meischer first identified DNA in human white blood cells. By the 1920s, the scientific community had widely accepted the theory of genetics and inherited traits. Rosalind Franklin’s x-ray photographs of crystallized DNA particles in 1950 (below) acted as a springboard for future discoveries and provided clues and precise observations into DNA’s notorious double helix structure. Shortly after, James Watson and Francis Crick constructed the first physical model of DNA. [1] 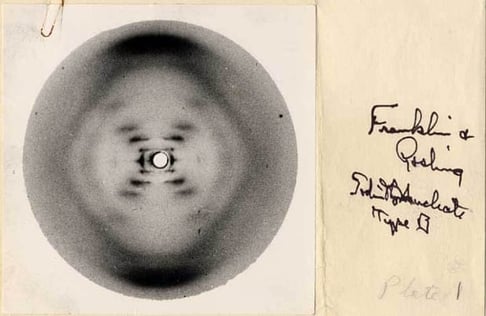 DNA testing was first used in the 1980s for paternity tests and to help solve crimes. But it was the Human Genome Project in the 1990s that led to explosive progress in the field. The project’s goal was to map all 3.2 billion nucleotides in the human genome, which it achieved in nine years—one of the world’s most ambitious scientific undertakings.  Developments continued in 2014, when scientists discovered that genetics and DNA are linked to mental illness and markers associated with Type 2 Diabetes including inflammation, fat, and glucose metabolism.


Technological advances in the field also significantly reduced the costs associated with sequencing DNA. In 2003, it cost a whopping $2.7 billion to complete. As technologies developed over the years, the price continuously dropped. Now, the cost to sequence an entire human genome is generally less than $1,000, making DNA testing  commercially available. [2]

Now, let’s take a more in-depth look into how we can extract information from our DNA and use it for our benefit.

The human body produces an average of 222 billion to 242 billion new cells every day! New cells are created through a process called cell division—the cell replicates its DNA, then divides into two, creating a new cell with a complete set of genetic instructions. This process happens so frequently that mistakes (or “typos”) are bound to occur.

These mistakes lead to variations at specific locations in the DNA sequences, called single nucleotide polymorphism, or SNPs (pronounced “snips”). SNPs occur about every 1,000 DNA units, which means we each have up to five million of these genetic variants in total. And while the majority of SNPs have no observable outcome at all, they occasionally create meaningful differences—differences that account for the variability in our DNA that makes us unique. SNPs can determine physical traits like hair and eye color, and even some less obvious characteristics, such as stubbornly-high levels of triglycerides.


With the genetic advancements made this century, researchers can now perform genome-wide association studies (GWAS) with relative ease. These studies compare the DNA sequences and SNPs of thousands of individuals at once. For example, a study may look at participants with a specific trait (like a peanut allergy) and compare their DNA to a similar group of people without the trait (a control group). By identifying the common SNPs and their locations, scientists can pinpoint the genetic variant that drives a risk for developing a peanut allergy. These studies have also identified SNPs associated with blood levels of just about every major health-related biomarker. This is excellent news for InsideTracker users, because we can use genetics as additional context regarding stubborn biomarker levels, like cholesterol.

Our scientists at InsideTracker were not satisfied with commercially available DNA testing platforms because they lack the SNPs that give our users ultra-personalization. In response, we spent over three years of rigorous research developing our own DNA platform, and carefully identified over 1,200 unique SNPs specific to wellness traits, blood biomarkers, and personalized nutrition. These 1,200 SNPs, most of them not available through any other DNA test on the market, were handpicked for precise relevance to complement the InsideTracker blood biomarker and personalized nutrition systems. How so? Let’s find out.

DNA and blood: Better together

Understanding the small variations in your DNA can give you an indication of your body's predisposition to certain wellness traits. And while you can't change your genes, you can change how your body responds to them. Remember, your DNA is not your destiny. Blood biomarkers, on the other hand, are constantly shifting in response to your nutrition, fitness, and lifestyle choices. They paint a picture of your body's response to your environment, and that picture can be improved over time by following personalized nutrition and lifestyle recommendations. It's the personalization of these recommendations that gets even more precise when both blood and DNA are part of the analysis. The addition of our new DNA Kit to our long-standing blood testing capabilities enables you to leverage this power. This combination of genetic testing with blood biomarker analysis allows you to see both your genetic potential and a snapshot of your current wellbeing, empowering you with more dynamic, customizable, and precise recommendations for optimizing overall health.


From our extensive pool of SNPs, we identified those that have the greatest impact on specific wellness traits. For example, we determined that 18 different SNPs can affect your genetic risk for high levels of inflammation, and another six influence your athletic capabilities. We called these our Genetic Potential Scores - sometimes, we combine as many as 75 SNPs for one single score. 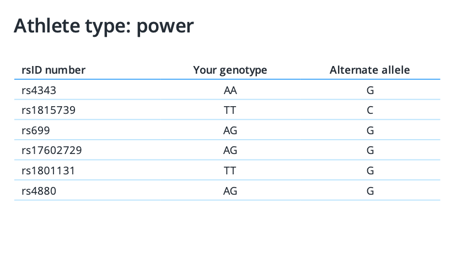 Some of these scores are based solely on DNA-traits. For example, some traits, such as athletic type and metabolism, are based on your genes only and do not include blood test data. Whereas, other genetic markers are paired with specific blood biomarkers, such as cholesterol levels and vitamin B12 (pictured below). In these cases, when you receive your most recent blood test results, they will be evaluated in combination with your DNA data.

As of now, we have identified 29 wellness traits based on 261 SNPs (or in InsideTracker language: genetic biomarkers) focused on five key areas—weight, sleep, sensitivities, aging, and performance. More specifically, these powerful and proprietary scores give you insights into your genetic influence on general wellness, athletic activity, longevity, food allergies, weight management, sleep, and nutrition preferences.

Given the relatively new and evolving world of DNA testing, InsideTracker and its team of experts are excited to deliver cutting edge analysis to our users as the field advances. Those who purchase the InsideTracker DNA Kit will get increasingly valuable insights over time as we continue to add new proprietary Genetic Potential Scores. And as new genetic research is published, InsideTracker's own software will also become more robust with new data inputs.

A practical approach to your data

Finally, how can you put this data to use? Let’s use LDL or 'bad' cholesterol as an example since the heritability risk for having elevated LDL cholesterol can be relatively high. Suppose you just joined the InsideTracker family and had both your blood and DNA tested. You believe you lead a relatively healthy life but notice your cholesterol is quite high. Trying to make sense of this, you check your DNA report and it reveals that your genetic risk for high cholesterol is “increased.” Armed with this awareness, now you can more carefully follow your personalized InsideTracker nutrition, supplement, and lifestyle recommendations for addressing this increased genetic potential for high cholesterol.

Understanding your genetic predisposition and your blood levels gives you a much more comprehensive look into your health. Through our DNA Kit, we hope to empower you to continue to make health decisions that are right for you.