Hundreds of elite athletes use InsideTracker to improve performance and extend their careers. What can regular users learn from using InnerAge to guide their fitness and wellness goals?

The move from analyzing individual biomarkers in the blood, to summarizing the current state of health and performance, is the new direction of being truly data-driven. Users who have either been tested with the InnerAge panel, or added the feature to the Ultimate and Performance Panels, can enjoy a few hidden gems in the platform. InnerAge is indeed a number, and it’s also the perfect gamification for those who want to win in life. As the great blog earlier this year explained, InnerAge is more than just a calculation of one’s biological age—it’s a support team in the race against the clock.

In brief, InnerAge is a measurement of five key blood biomarkers that calculates your internal age versus the one on your driver’s license. We all have seen the man or woman who looks 10 years older or younger, but knowing what your internal age is requires blood analysis. Just like a car, age is one consideration. But mileage is what is most telling.

Expanding on the analogy, rather than taking your car to the shop for an oil change, InnerAge users go to the lab or bring the lab to them to see where they are. Every few months, the game continues with another assessment. Sometimes we pull ahead and become internally younger than our chronological age. Sometimes, we fall behind. Either way, the race of life doesn’t end; it’s a true competition against ourselves.

I, like millions of fans, love Formula 1 racing. We can glean many lessons and approaches to success from auto sports. The key takeaways are proper pacing and staying on course. The sport also features three concepts that InnerAge users can apply to their own lives.

Pole Position—In motor sports, the starting point can be a major factor in determining the winning car, but the race isn’t over until the checkered flag is waved. Those new to biomarker analytics often find their InnerAge score less than ideal. A good frame of mind is to remember that the longer the race, the less important the starting point is. On the other hand, the older one is and the more urgent one’s goals, the greater the need to accelerate change. 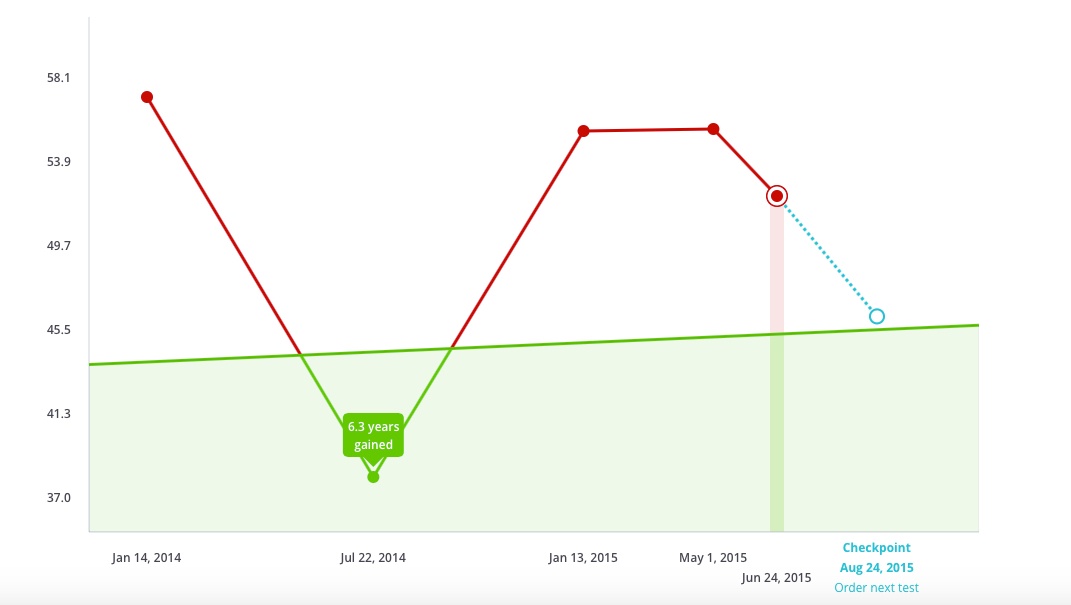 Checkpoints—InnerAge uses a three-month retesting rhythm, similar to a lap during a race. Checkpoints are human body service periods, far more complex than the old "oil change" analogy. That’s because these checkpoints not only score the InnerAge of users, they also break down the data and provide recommendations to improve those measures. InnerAge graphs and charts outline specific strategies, and show users how successfully they are attacking the race against the clock.

Pit Stops—Everyone needs periodic breaks and new directions, or they will break down. Pit stops are normal, planned periods in racing that are used to make adjustments. Using InnerAge and InsideTracker software, poor scores are accepted from time to time provided that the overall pattern is trending better—or in this case younger. We all have periods that may throw us off-track. The key is getting back in the race with the right adjustments and making smarter choices.

From Dashboards to the Plate-A Race for Focus Foods

Months ago we talked about Focus Foods, arguably the end goal and best representation of InsideTracker. Thinking about how the marvels of technology and software can transform microscopic data points into the most effective food options is a breakthrough. Many athletes and coaches getting Focus Foods early in our testing want to know details about serving sizes and so forth, but the name of the game is just getting them. Taking action doesn’t mean waiting for the perfect answer from someone else, it means solving the equation by navigating ourselves to the local market.

Focus Foods are exactly what the name implies, and they have two key elements. The first is the need to concentrate on the five foods provided, a simple way to improve without getting lost in details . The second is the homage to the microscope, the tool that facilitated so many important discoveries with InsideTracker. Any person able to know and acquire their personalized Focus Foods must appreciate the richness of data and innovation that has gone in to generating them. Having Focus Foods regularly takes advantage of both cutting-edge research and the best applied nutrition currently available.

Putting the Pedal to the Metal

InnerAge extracts all of the complexity from science and presents a elegant target goal for everyone, not just the elite athletes, but for anyone wanting to make progress. The race in life is not about speeding up, but actually slowing down and taking control of the drivers wheel and be empowered.

The benefits of optimizing the human body from the inside first can range from winning the Ironman in Kona to waking up feeling fresh instead of flat. The rules of the race are clear—time is linear but the choices to improve our internal biochemistry are not. “Anti-aging” is a misnomer, as time will always march forward. But winning in life is not about being immortal—it’s about doing the best with what you have.

So, when you get tested the next time and find that your body has skipped far ahead of Father Time, don’t let up. If you are behind, don’t give up. The beauty of the body is that it is responsive; small, smart changes can yield big results that shift the clock.

InnerAge: How One Simple Number Ignites the Change You Need