One topic that Longevity by Design guests can agree on is that sirtuin-6 (SIRT6) plays a protective role in aging and age-related conditions. Dr. Haim Cohen’s lab researches sirtuins, a class of enzymes involved in longevity and aging. He’s specifically interested in SIRT6 and its protective role in the aging process, as well as age-related conditions like cancer, insulin resistance, inflammation, and metabolic health.

In the latest episode of Longevity by Design, our co-hosts, Dr. Gil Blander and Ashley Reaver, are joined by Dr. Haim Cohen, Director of the National Metabolic Center for Excellence in Scientific Research in Human Diseases, and professor at Bar-Ilan University. Tune in as Dr. Haim Cohen takes a deep dive into SIRT6 and how his groundbreaking discovery about this enzyme can contribute to what we know about the aging process. 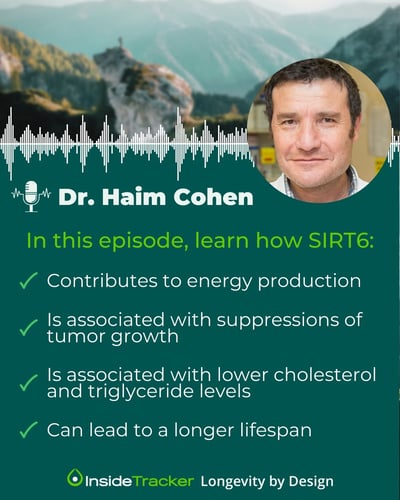 Dr. Haim Cohen, Director of the National Metabolic Center for Excellence in Scientific Research in Human Diseases and professor at Bar-Ilan University, studies the impact of the enzyme SIRT6 on aging.

Initially pursuing biology courses to become a veterinarian, Dr. Haim Cohen then joined a summer research program at the Weizmann Institute, changing his life and career trajectory. In the last year of his Ph.D. program, Dr. Haim Cohen read Dr. David Sinclair and Dr. Lenny Guarantee’s groundbreaking paper on how a gene found in yeast cells can impact aging. Dr. Haim Cohen was inspired to join Dr. David Sinclair’s lab, describing the experience as, “Feeling like a pioneer at the beginning of the sirtuin field.” After researching other sirtuins, Dr. Haim Cohen started to work on SIRT6. He found that caloric restriction was associated with increased SIRT6, and this was just the beginning.

How SIRT6 contributes to energy production

Dr. Haim Cohen's research shows that SIRT6 controls energy production. Interestingly, his lab found that older mice had the same activity patterns as younger mice. So, the team started to ask themselves, "What is the source of energy for this activity?" They realized that SIRT6 levels were involved.

"For energy, you can use glucose, produce glucose, burn fat, block the generation of triglycerides, or use amino acids. SIRT6 is like a traffic policeman for deciding which energy source to use."

Interestingly, SIRT6 responds similarly to physical activity as it does to fasting, because in both cases, glucose is depleted. When glucose is depleted, SIRT6 triggers gluconeogenesis to produce glucose for energy, and can continue to create more energy via the TCA cycle. 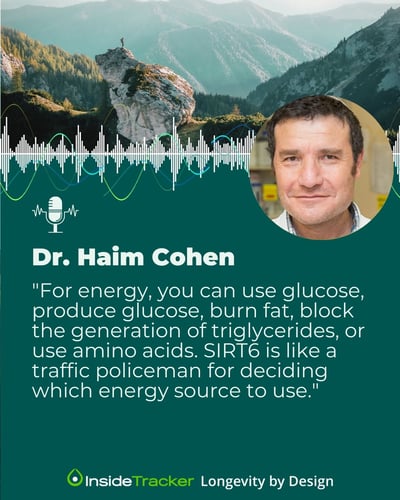 Dr. Haim Cohen's research also shows a connection between SIRT6 and lifespan. Too little SIRT6 was associated with early death and an overabundance of SIRT6 with longevity. "If mice don't have SIRT6, they die prematurely. But if they have an extra copy of SIRT6 now, they may live longer."

Dr. Haim Cohen's study found that oversaturation of SIRT6 in male mice resulted in a 30% extension of lifespan. However, the same oversaturation in female mice only resulted in a 15-17% lifespan extension. In the episode, Dr. Haim Cohen hypothesizes on mechanisms contributing to the differences between males and females, although the exact mechanism is still unknown. These results have been replicated in other organisms like C. elegans and Drosophila.

Dr. Haim Cohen’s studies show that an overexpression of SIRT6 is associated with lower cholesterol and triglyceride levels. In one of his studies, when he fed mice a high-fat diet for half a year, the mice showed a much smaller increase in triglycerides in comparison to normal mice that eat a high-fat diet for six months. This was an important discovery, because lower cholesterol and triglyceride levels are simultaneously cardioprotective and associated with a longer healthspan.

Carcinogenesis is the process by which normal cells transform into cancer cells. Cancer cells that divide uncontrollably within body tissue lead to the growth of tumors. Interestingly, the evidence on the impact of SIRT6 on tumor growth and suppression in mice studies is mixed. On the one hand, several papers, specifically in liver cancers, suggest that SIRT6 can act as a tumor suppressor at the beginning of liver cancer. However, on the other hand, SIRT6 has also been elevated within tumors, suggesting it may contribute to tumor development.

“I can say that in our mice model, when we over-expressed SIRT6, we found delayed periods of tumors and a significant reduction in the number of tumors. So, in the end, I think the evidence on the activity of SIRT6 as a tumor suppressor is sufficient.''

Dr. Haim Cohen has taken up running to promote health and longevity. He also advises to, “wear a smile and reduce stress in your life, because it can have an effect on lifespan.” He also touches on intermittent fasting (16/8) as a way reduce stress and delay the aging process. Check out the full episode to learn more from Dr. Haim Cohen.