This episode of Longevity by Design discusses concepts related to women's health, including the brain-ovary connection, reproductive health, ovarian aging, and the health implications of menopause. Our guest today is Dr. Garrison, a neuroscientist, and expert in reproductive health. Dr. Garrison talks about gender inequalities in research and how her research lab aims to progress the scientific understanding of women's health and longevity.

Jennifer Garrison, PhD, is a passionate advocate for women’s health and is pioneering a new movement to advance science focused on female reproductive aging. She is the Co-Founder and Director of the Global Consortium for Reproductive Longevity & Equality (GCRLE) and an Assistant Professor at the Buck Institute for Research on Aging. She also holds appointments in the Department of Cellular and Molecular Pharmacology at UCSF and the Leonard Davis School of Gerontology at USC. Her research lab studies the role of inter-tissue communication in systemic aging and how changes in the complex interactions between the ovary and brain during middle age.

The hypothalamus's role in the aging process

The hypothalamus is a brain region that plays an integral role in keeping us alive. This small structure is the control center that houses the neurons responsible for regulating homeostasis, for example, releasing hormones, regulating body temperature, controlling circadian rhythms, and linking the endocrine and nervous systems. 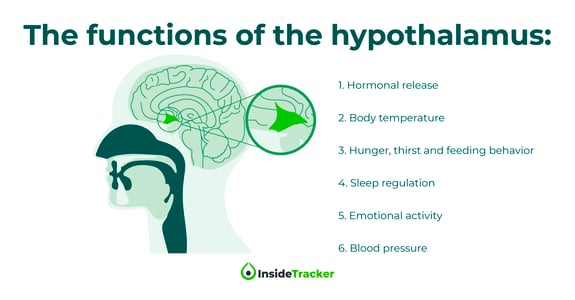 The brain-ovary connection and menstruation

In addition to her research on the hypothalamus, Dr. Garrison extensively researches female reproductive decline, beginning with the brain-ovary connection.

A woman’s ovaries are one of the most complex organs in her body. Throughout a 21-34 day hormonal cycle, ovaries experience a dynamic macroscopic remodeling, unlike any other organ. Dr. Garrison explains that this remodeling—the menstrual cycle—is the result of a constant, bidirectional chemical conversation between the brain and ovaries. “The brain-ovary connection is like an orchestra of signaling molecules that control the physiology of our ovaries. This signaling conversation includes hormones, proteins, and neuropeptides and is responsible for the menstrual cycle—including the buildup of the uterine lining and (when no pregnancy occurs) the shedding of the uterine lining,” Dr. Garrison says.

In addition to the unique physiological process of the menstrual cycle, Dr. Garrison notes that ovaries are also unique based on the speed at which they age compared to other organs.

In the absence of underlying conditions, general organ functioning starts to decline in one's seventies, eighties, and nineties. Comparatively, female reproductive function declines in the middle of a woman's life. More specifically, Dr. Garrison reveals that ovaries age at about two and a half times the rate of other tissues in the body. In fact, a woman's ovaries can show signs of aging in her late twenties and early thirties. "This very much falls off the curve in terms of the rest of the tissues in her body. While a healthy woman's tissues are functioning at peak performance, her ovaries are already aging in a drastic way," she concludes.

Dr. Garrison's lab is trying to understand this phenomenon better, namely how and why ovaries age prematurely. Ovarian aging impacts not only fertility but overall health as well.

Following her explanation of premature ovarian aging, Dr. Garrison talks about humans being one of the only species that experience menopause and the implications this has on healthspan. While reproductive decline impacts offspring generation in almost all mammals, menopause is surprisingly unique to humans. "It's humans, some whale species, and one species of non-human primates [who experience menopause]. It's not a biological imperative—so why it happens in humans is kind of a mystery," she says. And this predictable mid-life decline in ovarian function is associated with an increased risk for adverse health outcomes.

For example, research shows that postmenopausal women have an increased risk for heart disease, stroke, cognitive decline, and osteoporosis compared to premenopausal women, according to Dr. Garrison. Dr. Garrison believes that because the loss of ovarian function affects women's health, we need solutions to mitigate these side effects.

Longevity research has become commonplace in the past decade. With this in mind, Dr. Garrison argues that if we lengthen lifespan without also lengthening reproductive longevity in women, women will live half or more of their lives in a compromised health state. "That, for me, is an issue of equality. Men don't have to deal with this—they don't have their risk of heart disease quadruple over five years due to one of their organs ceasing to work properly," says Dr. Garrison.

Dr. Garrison also distinguishes between menopause and perimenopause, explaining that many people don't fully understand the difference. Menopause is a single day in a woman's life—it is the day a woman has not experienced a period in 12 months. Perimenopause is the time leading up to menopause and is associated with symptoms including hot flashes, cognitive decline, and brain fog. Perimenopause can last between 4-10 years.

What if we could achieve the other benefits that ovaries provide without necessarily expanding the amount of time that women could become pregnant?

Dr. Garrison notes that separating ovarian aging from ovaries' reproductive ability may be possible. "Right now, the best treatment for postmenopausal women to mitigate the dramatic health risks is hormone replacement therapy (HRT). We know that replacing a few of those hormones—usually estrogen, progesterone and occasionally low-dose testosterone—can dramatically and beneficially impact the mentioned health outcomes. So it certainly is possible to decouple them," Dr. Garrison explains.

Dr. Garrison aims to find a way to improve egg quality mid-life and slightly increase egg quantity. "If you could increase the number of eggs by 1% or 2% at age 40, that would have a dramatic impact—not just on a woman's ability to choose when and how she has a healthy child, but it would also push out the age of menopause. Changing that number by a few years would be a game-changer in terms of health benefits for half the population," says Dr. Garrison. Ideally, a solution would impact both, but at this point, the science is not conclusive on how to do so.

Misrepresentation of female health in research

Dr. Garrison importantly notes that women are understudied in scientific research, leading to misinformation and confusion, and has even harmed a  generation of women. Dr. Garrison shares examples:

Dr. Garrison’s top tip for women’s health is to get adequate exercise and add variety to your exercise routine. Women lose muscle as their estrogen levels drop, so she advises women to participate in weight-bearing exercises to reduce the extent to which estrogen levels decline.

Menopause: What's Actually Happening and Why

All About Training and Staying Active Through Menopause

Using DHEAS as a Biomarker of Aging in Women