In this episode of Longevity by Design, our co-hosts, Dr. Gil Blander and Ashley Reaver, are joined by Dr. Steven Austad, Professor and Protective Life Endowed Chair in Healthy Aging Research of the Department of Biology at the University of Alabama at Birmingham. Tune in as Dr. Steven Austad describes how his unique career path from lion tamer to aging researcher has influenced his perspective on the top questions in the field.

Dr. Steven Austad is a Professor and Protective Life Endowed Chair in Healthy Aging Research of the Department of Biology at the University of Alabama at Birmingham. In addition, Dr. Austad is the Scientific Director of the American Federation for Aging Research and directs the NIH-supported UAB Nathan Shock Center of Excellence in the Basic Biology of Aging. Dr. Austad's research seeks to understand the underlying causes of aging with a long-term goal of developing medical interventions that slow the age-related decay in human health. Dr. Austad authored more than 200 peer-reviewed publications covering various aging topics from cells to societies.

Dr. Steven Austad didn't always know that he wanted to become a scientist. In fact, he shared, "I never suspected that I would be interested in aging research; it was an accident." After pursuing an undergraduate degree in English literature, his life goal was to write the "Great American Novel." He jokes, "And since you've never heard of it, you can see how that worked out." Dr. Steven Austad took a side job that led him to a lion training facility in Hollywood. He spent the next three and a half years taming lions, tigers, and other animals for movies. 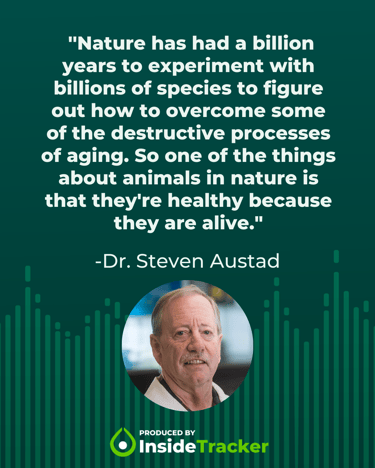 From taming wild animals to researching them

Reflecting on his time as a lion tamer, Dr. Steven Austad found that this time shaped his career, "That time really reawakened an interest in science that I had my whole life, but had been kind of suppressed."

From there, Dr. Steven Austad decided to go back to school to study animal behavior in a more rigorous, scientific fashion. During his postdoc, Dr. Steven Austad's interest in the rate of aging of varying species grew. "Well, why do some animals age quickly and some age slowly?"

Notably, Dr. Steven Austad became interested in studying the behaviors and aging of wild animals compared to typical laboratory animals. He examples the behavioral differences between laboratory and wild mice. For example, when placed on a rotating rod with an 18-inch drop, laboratory mice will fear falling, whereas wild mice will jump off the rod, onto the floor, and run away.

Dr. Steven Austad points out that the evolution and survival of animals in itself reveals lessons in aging. ''Nature has had a billion years to experiment with billions of species to figure out how to overcome some of the destructive processes of aging. So one of the things about animals in nature is that they're healthy because they are alive. If they're not healthy, the challenges of nature are such that they won't be around very long.”

"Interestingly, when I first moved to the South, I did a county-by-county analysis of health and life expectancy, just as a way to learn the area. I discovered that the healthiest counties have a higher percentage of college graduates, have lower obesity rates, fewer smokers, and are more wealthy. But, even these counties barely reached the national average life expectancy, and these factors should put these counties above the national average."

But, of course, there are also individuals in these areas who live until their nineties. And so Dr. Steven Austad hypothesizes—do they have unique genes? Do they do something in their lives that we're overlooking?

Why is the average life expectancy higher in women than in men?

A common and accepted statistic is that the average life expectancy in women tends to be higher than men. However, Dr. Steven Austad challenges listeners to understand the extent to which this is true. "Women have a longer life expectancy in industrialized, Western societies. But this is also true in hunter-gatherers and countries whose life expectancy is very low. It's true during times of famine and pandemic. It's even true in young girls. Young girls have better survival than young boys even before age five. Women also die at lower rates of virtually every disease. It's not that men get more heart disease; it's that women survive diseases better than men." Tune in to the full episode to hear about Dr. Steven Austad’s hypotheses on the sex difference in life expectancy.

After studying the behavioral component of animals, it's no surprise that Dr. Steven Austad is interested in the behavioral aspect of implementing healthful behaviors every day. Health knowledge is important, but incorporating it into everyday life is critical. When asked about what he does every day to promote living a healthier, longer life, Dr. Steven Austad says, "I make it a point to exercise every day. And to exercise substantially. I get my heart rate to 150-160 every day. And I'm not doing that because I think it will make me live a long time. If it does, that's great. I'm doing it because it allows me to do other things. I can still climb mountains, you know? I can still play basketball. I can do a lot of things that I wouldn't be able to do."

Why Decades of Dairy Fat Research Might Be Wrong