Psyllium Spotlight: A Simple Way to Improve Your Metabolism 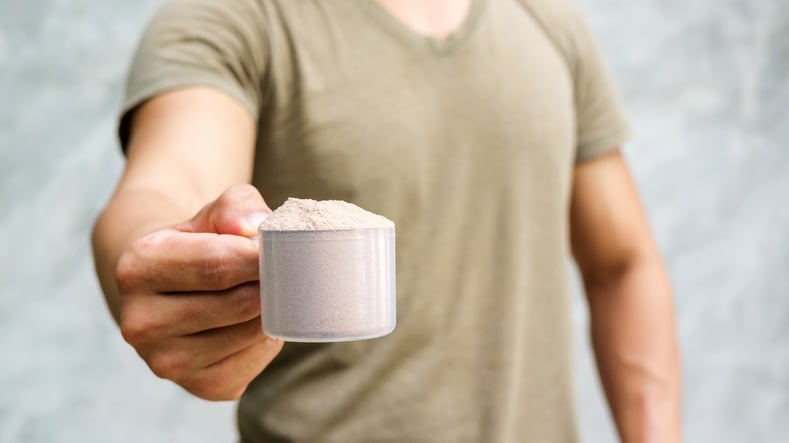 If you’ve checked your InsideTracker account in the past few months, you may have noticed an update in your supplement recommendations. While they are all backed by science, some may sound pretty foreign. One such supplement is psyllium, which is recommended for many of the metabolic markers if they are outside of the optimal zone. And although it sounds exotic, psyllium is just the husk of a seed—but it does have some serious health benefits.

What is psyllium and where does it come from?

Psyllium is made from the husk of the seeds of the plant Desert Indianwheat, or Plantago ovata. The Plantago plant family has about 200 other members, including many different varieties of plantains. It is predominant produced and exported from India, where it has been a staple in Ayurvedic medicine for centuries. It is also grown in other Asian and European countries, but on a smaller scale. In the US, Plantago ovata, specifically for psyllium seed husk, is being grown and researched in some southwestern states.1

The seeds of the plantago are less well known as the husks, and for 80 years the husks have been used commercially to help with fiber and other digestive treatments.

The Plantago family members have been used as herbal remedies for ages. Like some of our other plant-based supplement recommendations, berberine and garlic, Plantago plants have had a range of uses throughout history ranging from a antimicrobial agent and cough suppressant to skin treatment for poison ivy, mosquito bites, and boils. The psyllium seed husks have also been used to treat a range of bowel disorders and constipation due to their potent stool bulking ability. Psyllium was first made commercially available as a laxative in 1934 with the introduction of Metamucil.

What does psyllium do when inside the body?

The soluble fiber, also called mucilage, found in psyllium swells as it passes through the GI tract. As it swells, it turns into a thick gel and traps some nutrients and body fluids, which are then transported out of the body trapped in this gel, and without being digested. InsideTracker recommends psyllium husk for its affects on reducing total cholesterol, LDL cholesterol and glucose, and for increasing HDL cholesterol. 3, 4, 5, 6

When soluble fiber is consumed as part of a complex meal containing glucose, some glucose gets entwined in the soluble fiber-formed thick gel. A fraction of this glucose is trapped the entire course of digestion and is excreted without affect on the body. Another portion of the glucose escapes and is absorbed into the blood stream, but at a much slower rate than it would be absorbed if no soluble fiber was present. The slowed rate of absorption coincides with a slowed insulin release response from our pancreas. In other words, there is a smaller and slower increase in blood glucose resulting in a smaller and slower decrease in blood glucose in response to insulin’s interference. 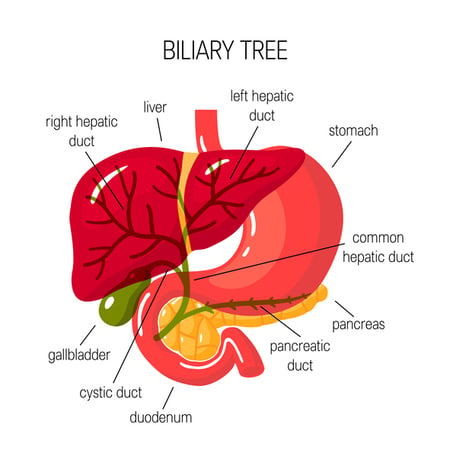 The main function of the gallbladder is to store bile and is part of the biliary system. Bile is produced in the liver and the gallbladder stores roughly 1-2 ounces of the fluid.

Psyllium affects cholesterol in a more roundabout way. Bile, a digestive juice, is made from cholesterol and required for the digestion of fats. After consuming a meal, bile is released into the duodenum, the upper portion of the small intestines. It is readily trapped in psyllium’s viscous web and once it’s trapped, it’s along for the whole ride until it passed from the body. Typically 95% of the bile used in digestion is recycled and return to the liver and gallbladder for later use so it’s production has a negligible effect on overall cholesterol levels. With soluble fiber, however, the amount of bile recycled is drastically reduced. This requires the liver to draw on cholesterol stores to replenish what was lost, resulting in a reduction in total and LDL cholesterol.

The increase of HDL is in response to the lowered levels of LDL. An easy metaphor to remember the roles of “good” cholesterol and “bad” cholesterol is to think of HDL as a policeman and LDL as a criminal. In circulation, HDL’s job is to pick-up LDL and take it back to jail (the liver) where it can be booked (reprocessed to another form of cholesterol). A higher number of HDL cops out on patrol lead to a lower number of LDL criminals out on the blood vessel streets of our body. And vice versa: with fewer LDL criminals to constantly haul back to liver jail, there are more HDL cops roaming the blood vessel streets. It is important to have high HDL cholesterol in order keep LDL at healthy levels. LDL cholesterol is the form that can become oxidized and form plaque in the arteries, causing them to narrow and potentially causing a blockage of blood flow.

To summarize, psyllium is a powerful tool for improving glucose and cholesterol. It may also help with weight management and appetite control since it is high in fiber. Fiber helps to make you feel fuller sooner and longer resulting in fewer foods consumed.

How to add psyllium into your diet

Psyllium can easily be found in any health food or supplement stores. It is also available from a large, well-known online retailer. It has a coarse texture somewhat similar to ground flaxseed. It is flavorless and has no odor.  We recommend two 5g servings per day and it should always be taken with at least 8 fl oz of fluid. Some ways to consume it:

To note: if mixing it into water, smoothies, or sauces, you should add psyllium immediately before consumption. When mixed with liquid for a period of time, it will form a gel just like it should in your gut. Everything is definitely still edible after a period of time; it will just be a fair bit thicker.

Also, the combination of food with psyllium is important. Just like glucose and bile, minerals can get trapped in the psyllium gel, too. If you need to focus on increasing iron, it is best to consume psyllium when you aren’t consuming a meal. Similarly, it shouldn’t be consumed with calcium-rich sources because it will reduce the absorption of calcium.1

The proof is in the pudding with psyllium, as it is with all of our supplements.  Our intention is to provide you with several recommendations for supplements, nutrition, exercise and lifestyle and allow you to make the choices that best suit your lifestyle. Sifting through all the science is hard. That’s why we’ve done it for you. And wrapped it in a colorful, easy to read package personalized to your biochemistry. Come see what we’ve found for you.