If you’re an athlete, you’ve probably heard plenty of information about the importance of incorporating ample amounts of protein and carbohydrates in your diet. Especially during training season, it can be a challenge to meet your nutritional needs when it comes to healthy calorie, fluid, vitamin, and mineral consumption. However, adequate iron intake plays an equally important role in optimizing physical performance, despite the fact that it receives much less recognition.

So, what exactly does iron do?

Iron is an essential mineral that is a part of the protein hemoglobin, which is found in all the body’s red blood cells. Hemoglobin works to supply the muscles and other organs with enough oxygen, as well as help the body to convert carbohydrates and fat into forms of energy.

If you’re an athlete who is deficient in iron, you probably have lower levels of red blood cells and hemoglobin, which can negatively impact performance. Conversely, too much iron in the blood can increase inflammation, raise cholesterol and decrease cardiovascular health.

Essentially, this means that iron deficiency decreases your body’s ability to use energy efficiently during exercise. Symptoms can include frequent injury, a depleted immune system and an increased susceptibility to illness, chronic fatigue, irritability, and a high exercise heart rate. So, if you want to keep your body energized throughout and athletic event, make sure you have adequate level of iron in your blood so you don’t become fatigued too quickly!

Why are athletes susceptible to iron deficiency?

Athletes tend to deplete iron at faster rates than non-athletes, due to increased exercise-induced iron losses through sweat, urine and feces. In particular, pre-menopausal female athletes are at an especially increased risk for depleted iron levels because of the hemoglobin that is lost during menstruation.  In fact, female athletes are three times more likely to be anemic than non-athletic women.

Nearly twenty percent of recreational athletes are anemic and a third are iron deficient, which leads to reduce physical performance. In fact, physically active iron-deficient (but non-anemic) women who take 8mg of iron supplements twice a day for 6 weeks were able to shave an average of 30 seconds off their 5k time.

Your body also loses iron during heavy training periods through sweating, running, and the gastrointestinal bleeding that can sometimes follow intense workouts. So, it’s very important to watch your iron intake to avoid plateauing during an athletic event! 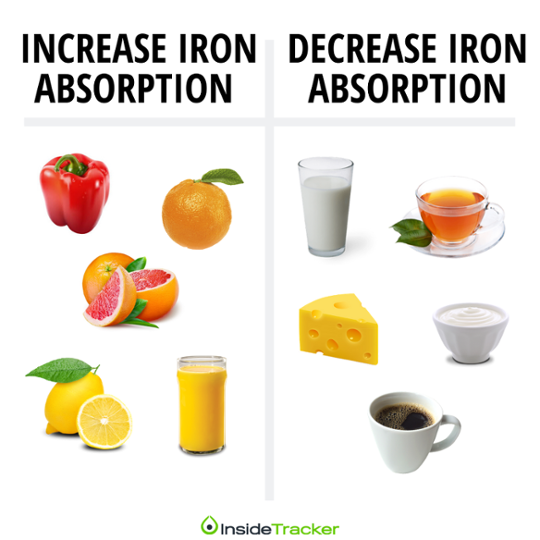 How you can get enough iron

The Recommended Dietary Allowance (RDA) of iron for adult women and teens is 15 milligrams a day. The RDA for adult men is 10 milligrams. If you’re an endurance athlete, you most likely need a slightly above average intake of iron to keep the oxygen flowing through your body during training. You can get plenty of iron from incorporating iron-rich foods into your diet, especially from animal-based products like red meat, poultry, fish, and liver.

If you’re a vegetarian, keep in mind that the absorption rate of the iron in animal-based sources is about 15 percent, compared to 5 percent in plants. Many breakfast cereals and bread products are fortified with iron, so make sure you’re eating plenty (and try to make at least half of them whole grain, while you’re at it)!

Athletes with low levels of iron are often encouraged to take iron supplements in order to raise their blood iron level, which consequently increases the amount of oxygen their lungs can absorb (known as their VO2max) and their anaerobic capacity. Your InsideTracker recommendations will tell you exactly what your supplement dosage should be.

Here are some other ways that you can avoid iron deficiency while maintaining your rigorous training schedule:


If you’re an athlete, you probably invest an ample amount of time training for an event, so make sure that you’re able to perform at your peak by monitoring your blood levels of iron!