How Dry January Can Benefit Your Health, According to the Experts 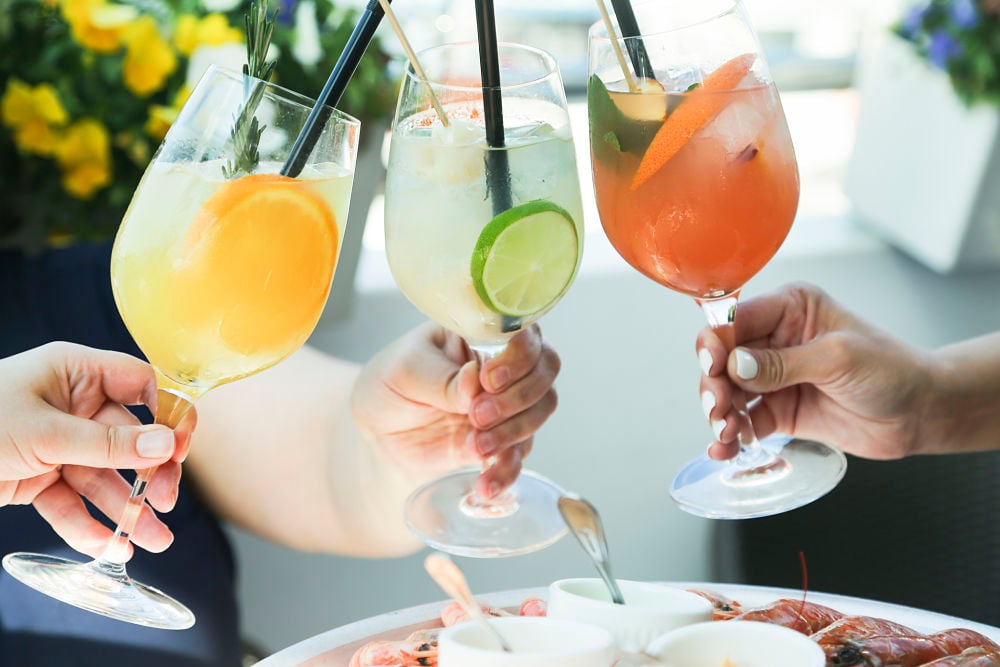 Dry January is a global initiative about going alcohol-free for the month of January—a change that can have long-lasting mental and physiological health benefits. Alcohol intake traditionally rises during the holiday season, but this trend has been exacerbated due to impacts of the current pandemic. In fact, research shows that certain alcohol sales have increased by over 200% since last year. This increase in alcohol consumption has important implications on our health, including increased risk of mental health disorders and chronic diseases like heart disease and certain cancers. Initiatives like Dry January aim to reverse these impacts, as research shows even a short-term reduction in alcohol consumption can have long-term health benefits.

Alcohol intake has increased considerably during the COVID-19 pandemic

Alcohol intake is booming. According to data from Nielsen reports, in-store alcohol sales increased by 54% while online sales grew 262% from January to March compared to the same time last year.[1] The current global health crisis has largely fueled this uptick in sales. In a recent poll, 16% of U.S. adults reported increased alcohol consumption during the pandemic compared to their normal habits.[2] A study published in JAMA further validated the rising trend, finding that people are drinking an additional day per month this year compared to last. What's more, the risk of binge drinking—consuming more than four to five drinks in two hours—has also increased with each week of COVID-19 lockdowns, according to a study published in the American Journal of Drug and Alcohol Abuse.[3]

How does this increase in alcohol impact our health?

It’s well-established that long-term, excessive drinking triggers a myriad of health issues, including alcoholism, mental health disorders, and chronic diseases such as heart disease, liver disease, and several types of cancer. These stats are particularly relevant this time of year—alcohol intake typically soars during the holiday season, with some Americans doubling their drinking between Thanksgiving and New Year's Day.[4] And these changes in habits have their risks. Holiday Heart Syndrome, a condition associated with heavy or binge drinking, often leads to an acute cardiac rhythm disturbance (aka. irregular heartbeat). As the name suggests, it’s most common during the holidays when drinking increases.

Could a hiatus from alcohol solve some of these health issues? Yes! A mere thirty-day break from alcohol, like the initiative Dry January, can produce some astounding results. We examined the research and chatted with some prominent people leading the sober curious and Dry January movements to get the inside scoop.

What is Dry January?

A campaign started in the U.K. by Alcohol Change, Dry 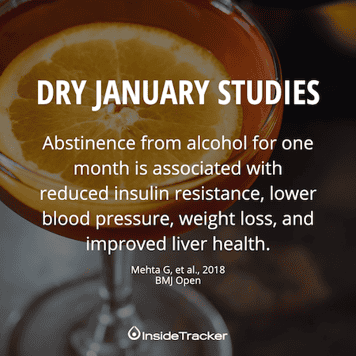 January encourages people to refrain from drinking for the entire month of January to raise awareness about drinking habits and the potential dangers of alcohol consumption. It began in 2013 with a little over 5,000 participants and has since exploded in popularity, reaching 82,000 participants in 2019—not including an additional several million who “unofficially” participate (meaning they don’t officially register with the organization).[5] Why the boom? We chatted with Richard de Visser, Ph.D., professor, and researcher who’s been published over 100 articles in peer-reviewed journals including about the Dry January movement. “There has been a positive feedback loop between the research and growing participation,” commented Dr. de Visser. “The Dry January team have been able to use the research to promote the campaign, and this has brought in more participants.” Dr. de Visser credits diffusion and social contagion, commonly known as word-of-mouth, for the movement's growth as participants excitedly tell others of the benefits they have enjoyed.


What are the benefits of Dry January?

The benefits of Dry January include improved glucose and cholesterol, better control with subsequent drinking, and enhanced energy, concentration, and general well-being.


This study found that alcohol drinkers who took a one-month break from imbibing had improved insulin resistance, lower blood pressure, and experienced weight loss. After the study ended, many of the participants continued to eliminate or reduce alcohol for an additional six to eight months. “There are many different mechanisms that could explain why giving up alcohol, even for a brief period, may positively benefit health. From a nutrition perspective, alcohol impacts the metabolism of both macro- and micronutrients. At the same time, alcohol itself provides calories: seven calories per gram, making it more energy-dense than carbohydrates but less energy-dense than fats,” commented Registered Dietitian Kerry Benson, who spent six years studying the impact of alcohol exposure at the neuroscience research lab at the University of Delaware. For reference, a standard drink contains around 100 calories from alcohol, not including calories from added sugars in a cocktail or carbs in a beer. Alcohol also impairs our judgment, which can affect our food choices during and after drinking, and impacts sleep, which in turn may disrupt hormones, explained Benson. 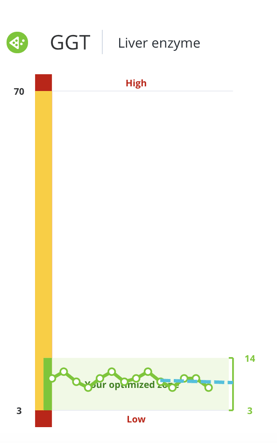 Another study published in 2018 evaluated the effects of a 28-day abstinence from alcohol and liver health.[6] GGT, a liver enzyme measured in many InsideTracker blood tests, helps to break down toxins, including alcohol. Normal GGT levels are essential for proper liver health, but as alcohol intake increases, so does GGT. Although the sample size of this study was quite small (n=16), the researchers found that just a 28-day break from drinking reduced GGT levels in moderate alcohol consumers—people who drink within the alcohol recommendations. Once participants resumed their normal drinking behaviors, their GGT levels increased again, returning to their baseline levels. The control group (non-alcoholic drinkers) experienced no changes in GGT. This study demonstrates that even a short break from alcohol can improve liver health.

At InsideTracker, we ran an analysis within our own database, comparing health markers of users who consume alcohol to those who refrain from drinking. InsideTracker users who average more than eight drinks per week have significantly higher total cholesterol, LDL (bad) cholesterol, triglycerides, and GGT liver enzyme than those who don’t drink alcohol.

Studies of this nature show that abstinence from alcohol extends to mental health benefits as well. In a 2020 study led by Dr. de Visser, he and his colleagues found that Dry January participants experienced an improvement in well-being i.e., they saved money, slept more soundly, and felt an increase in energy. When asked about these results, Dr. de Visser commented, “We were initially surprised by how many people reported benefits such as improved sleep, better concentration, and having more energy. We found that the majority of participants in our studies reported these benefits. Although people were a bit less likely to report losing weight—alcohol is full of calories—we still found that around 40% of people experience this during the one month period of not drinking.” In general, studies like this one have shown that the benefits of Dry January aren't just physiological—they can also be mental.

Dry January benefits can extend well into the future

As previously mentioned, participants often experience continued positive effects after Dry January ends. Dr. de Visser’s past studies have demonstrated that Dry January can help you deal with future social situations.[7] “We had expected that people would feel more in control of their drinking, but when we embarked on this program of work, we didn’t know whether this would last or lead to lasting behavior change.” After completing Dry January, participants reported increases in drink refusal self-efficacy (DRSE)—the ability to refuse alcohol in different settings. The majority of participants who successfully completed Dry January reported significant changes in drinking behavior—they drank less each day and experienced fewer drunk episodes. “We were happily surprised that when we followed-up with people six months after the end of Dry January, more than one-third are drinking less, with around 50% going back to pre-existing drinking patterns, and less than 15% ending up drinking more.” Turns out, Dry January can lead to longer-lasting behavior change.

Who should (and shouldn’t) participate in Dry January?

If you’re looking to experience the benefits of an alcohol-free or limited-alcohol lifestyle, Dry January is the perfect solution. However, as Dr. de Visser notes, dependent drinkers or people who may have an addiction should seek professional help on their path to sobriety.


How to succeed during Dry January

Dry January doesn't come without its challenges. “Drinking alcohol is so normalized in our culture that it can seem wrong to pass on it, be it for a night or forever,” mentioned Benson. A commonly reported challenge of alcohol abstinence during Dry January includes negative reactions and pressure from others to drink.[8] “In these situations, you can prepare yourself by coming up with a reason for not drinking (e.g., "I have to work early tomorrow" or "I'm the designated driver"). But, you also don't need to justify your choice—it isn't anyone's business.”


Another common challenge included feeling bored or lonely; for example, some people purposely skipped social events or felt bored when not drinking.[8] When asked how one may counteract this, Benson said, “fortunately, there are so many alcohol-free options available these days, from mocktail recipe books (like my book Drinking for Two: Nutritious Mocktails for the Mom-to-Be), to beers, to liquors, to wines. You will never run dry on inspiration!” According to Kantar Worldpanel, the non-alcohol category sales were up 20.5%, and low-alcohol beer and cider sales up 30% in just one year. Globally, the market is expected to hit $1,189 billion by 2023. Furthermore, AB InBev expects no- or low-alcohol beers to make up 20% of its total volume by 2025, up from 6% currently.

Parting words of wisdom from the experts

“Just give it a try!” Dr. de Visser exclaimed. “You have nothing to lose, and you may be surprised by the difference it makes.”


“For anyone participating in Dry January, my advice would be to view this as an opportunity to explore and try new things. Keep alcohol-free alternatives on hand. If you typically drink cocktails, invest in barware and glassware that will elevate your mocktail experience,” said Benson.

We’ve also compiled a Dry January Guide with some of the most effective ways to overcome the challenges reported during Dry January, along with a calendar tracker, and ten healthy mocktail recipes to get you through the month. If you’re looking for a support group, join the InsideTracker Insider’s Facebook Group, where we'll be trading successful strategies all month long.