Science-Backed Habits to Live Past 100: Lessons from the Blue Zones 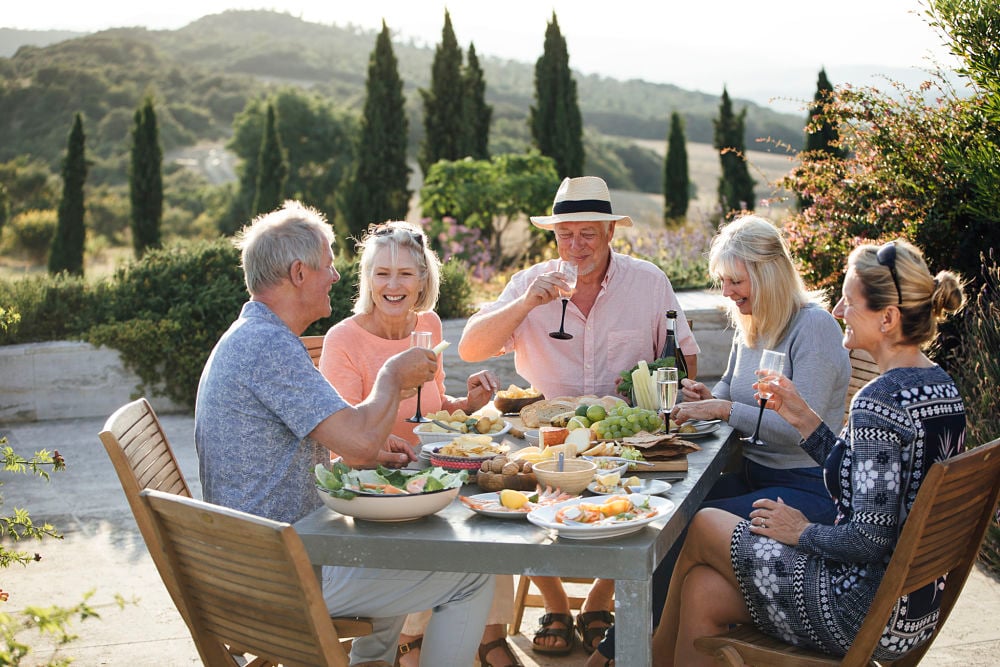 After reading David Sinclair’s book Lifespan, I’ve been on a mission to uncover more strategies to increase longevity. In my last blog, The Best Foods to Slow Aging, I investigated the top foods that impact cellular aging. Individual foods like broccoli sprouts and mushrooms work to an extent, but it made me wonder whether there were larger diet patterns and behaviors that have already proven effective. Well, what better way to answer this question than to look at populations in which people not only live the longest in the world, but also live free of chronic illnesses? And in doing so, I discovered the fabled Blue Zones.

These global regions hold the secrets to longevity


Once the Blue Zones were identified, a team of anthropologists, demographers, epidemiologists and researchers studied the characteristics of each location to uncover their formula for longevity. Here's what they found. 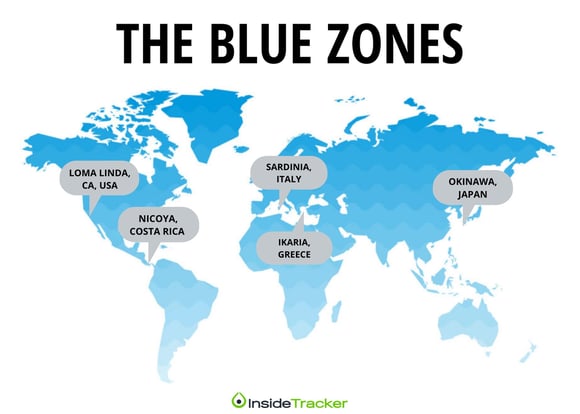 Ikaria is an island in the Aegean Sea, and its remote nature has enabled its inhabitants to maintain their traditions and avoid Western influence. Ikaria boasts one of the lowest rates of middle-age mortality and dementia in the world, which contributes to its healthy older population. Ikarians enjoy sharing long meals with family and friends, taking regular naps (at least five days per week), and engaging in sex into their older years—around 80% of Ikarian males between the ages of 65 and 85 still have sex regularly! They stay active by frequently walking to their neighbors' houses and by partaking regularly in gardening and yard work.

Often referred to as the “Japanese Hawaii,” Okinawa is a group of Japanese islands with pristine beaches and tropical weather. Okinawa has one of the highest centenarian ratios in the world—an estimated 6.5 in 10,000 residents live to 100 years of age—and holds the world title for highest life expectancy in women (an average of 88). Okinawans participate in a strong social network known as a moai that lends financial and emotional aid in times of need. Similar to the Ikarians, Okinawans engage in low impact exercise by walking and gardening regularly.


Centenarians there consume 60% of their calories from the Okinawan sweet potato, a purple or yellow variety of our typical orange one. They eat a diet rich in soy—about eight times as much as Americans—and foods like bitter melons, garlic, turmeric, brown rice, green tea, shiitake mushrooms, and seaweed. Fish and eggs are consumed as well, although less frequently, and pork is served on special occasions. Okinawans recite “Hara Hachi Bu” before meals, which reminds them to stop eating once they’re 80% full.

Sardinia is a mountainous island off the coast of Italy with the world’s highest concentration of centenarian men. Sardinian shepherds spend their days moving livestock from the mountains to the plains, summing to five or more miles of walking each day. Pastoralism there is highly correlated with living to 100—that is, shepherds in Sardinia are up to ten times more likely to reach 100 years of age than men in the rest of Italy.


To fuel their activity, their diet consists mainly of carbohydrates like potatoes and whole-grain bread and pasta. They obtain fat from goat's milk, sheep’s cheese, and olive oil, and protein mostly from fava beans and chickpeas. Sardinians enjoy two small glasses of Cannonau wine daily—which has two-to-three times as much heart-healthy flavonoids than other wines—and limit their meat intake to around three or four times a month. The unique movement of walking in steep terrain also allows these shepherds to reap the positive cardiovascular benefits of exercise without triggering inflammation in the body. 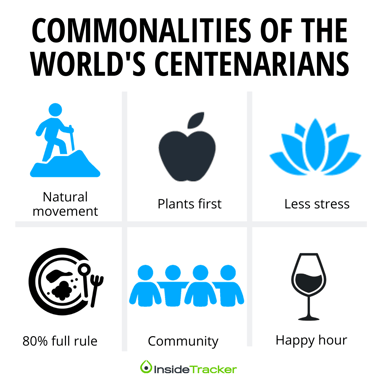 Loma Linda is home to the highest global concentration of Seventh-day Adventists, who encourage a biblical vegan diet of grains, fruits, soy, vegetables, and nuts. Their traditional diet is low in sugar, salt, and refined grains, and void of alcohol and coffee. Some less-strict Adventists eat small amounts of dairy and fish (usually salmon), and some even drink alcohol, although not as commonly. Adventists focus on regular physical activity and stay very active into their older years. They celebrate the Sabbath on Saturdays, spending the day in contemplation at home or church, and regularly engage with their community.

The Nicoya Peninsula is a region in Costa Rica and is home to the world's second-highest concentration of male centenarians and lowest rate of middle-age mortality. Their motto “plan de vida,” or "reason to live," encourages an optimistic outlook among elders. The Nicoya community embraces a strong connection to faith and family and keeps active through labor and household chores.


Their diet is plant-based, low in calories and fat, and rich in legumes. They eat the majority of their calories early in the day, saving a lighter meal for dinner. The bulk of their diet consists of carbs from rice, maize, beans, and tropical fruit like papayas, bananas, and peach palms. They obtain lots of vitamin D and calcium from their constant sun exposure and drinking water, respectively, which may explain their strong bones and low hip fracture rates.

Using InsideTracker to live past 100

Eat a plant-based diet: As evidenced by the Blue Zones and by various studies, switching to a plant-based diet or including more plant-based meals can help improve mortality and longevity. [2-5] I eat a primarily vegetarian diet, but I’m now making a more conscious effort to reduce the dairy and eggs in my diet.

Try intermittent fasting: People in the Blue Zones tend to have their lightest meals towards the end of the day and don’t overindulge in food. Studies examining intermittent fasting show positive results when participants eat smaller meals toward the end of the day. Such results include lower body weight, glucose, insulin resistance, and inflammation—all critical factors to healthy aging. [6] I’m focusing on implementing 16:8 intermittent fasting, in which I fast for 16 hours and limit my meals to an eight-hour feeding window and aim to end my last meal on the early side. The app Zero has helped me work towards this goal.

Spend less time sitting: I admit—I sit hours on end at work. But decreasing the time one spends sitting by just 30 minutes each day helps support healthy aging. [7-8] All five locations in the Blue Zones promote natural movement like walking, hiking, or gardening. My new plan: for every hour I sit at work, I will use my standing desk for one.

Consume two tbsp of olive oil daily: Both consuming olive oil and the Mediterranean diet, a diet high in olive oil, are associated with healthy aging. [9-10] The Sardinians and Ikarians also prove this to be true, so I started adding high-quality olive oil to my salads.

Practice mindfulness daily: Meditating for 30 minutes each day helps to reduce stress levels, which is also crucial for healthy aging. [11-12] Stress relief is common in the Blue Zones, whether it be through a sense of purpose, a financial safety net, sex, or prayer. I bought a subscription to the meditation app Calm and have started with 10 minute guided meditations daily.

The Blue Zone centenarians are living proof that a specific set of habits work for increasing longevity, and I was pleased to see InsideTracker’s recommendations aligned quite well with this list. But traditional lifestyles may only get us so far in our constantly-evolving world. Luckily, we can use advanced technologies like InsideTracker to adapt and guide us in the quest to live past 100!

If you’re looking to eat like a Blue Zone centenarian, then grab our eBook ‘Recipes for Longevity’ where we crafted recipes that replicate the meals consumed by our long-lived brethren.