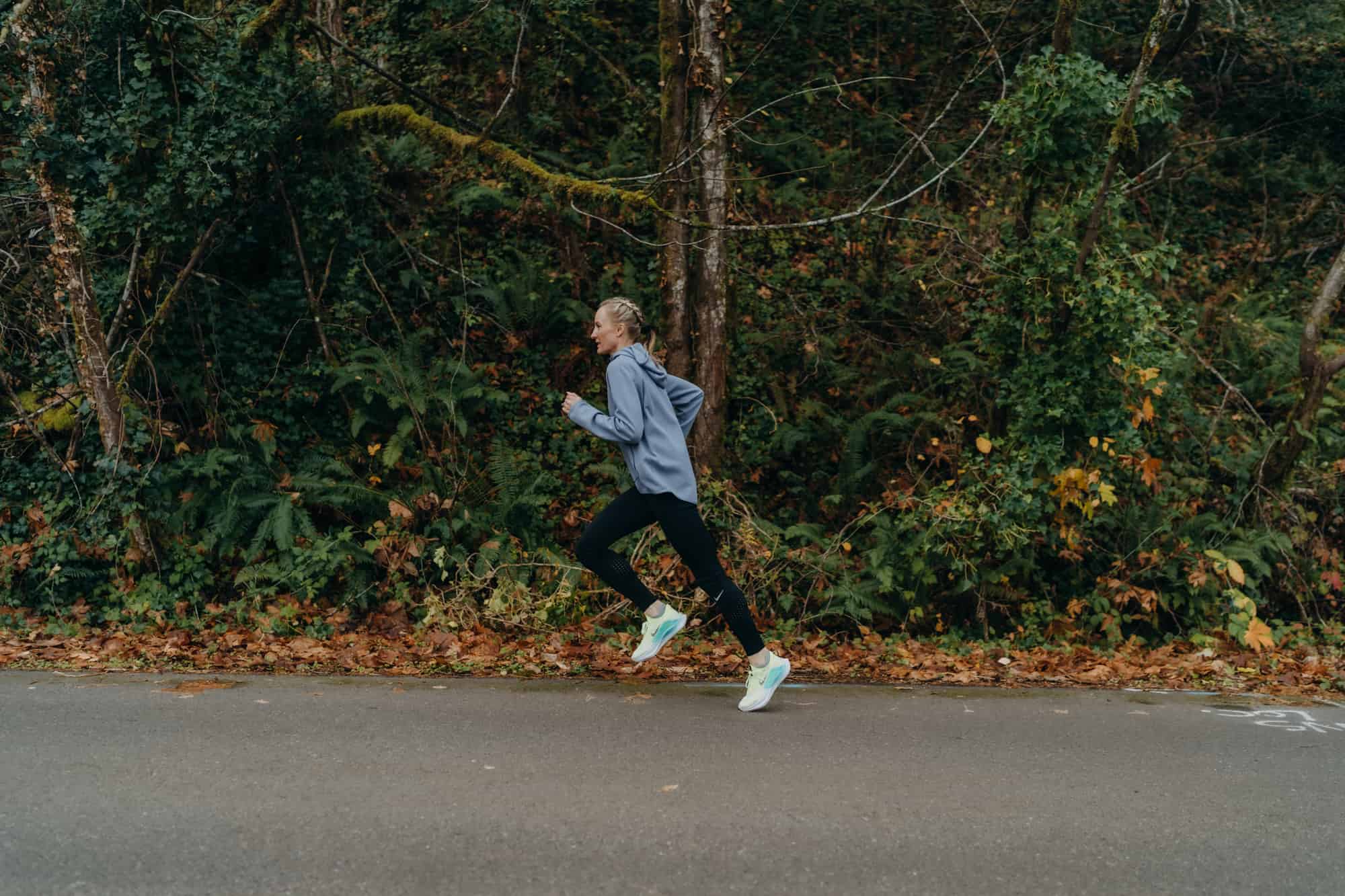 After the announcement of a stacked schedule of fall dates for six major marathons, Flanagan saw this "total running eclipse" as an opportunity of a lifetime—she would run them all, in extremely quick succession. She set this goal to challenge herself and "to do something that makes others feel they can do anything." With a strong team behind her, including InsideTracker to help guide her nutrition, performance, and recovery, Shalane set out to run six marathons in six weeks: Berlin, London, Chicago, Boston, Tokyo (virtual), and NYC.

The racing began on September 26, 2021, when she toed the line at the Berlin marathon—but her inside story started weeks prior with baseline blood analysis from InsideTracker. Here’s what Shalane learned from testing with InsideTracker five times throughout Project Eclipse.

Using her personalized action plan from her first test (done after returning from coaching at the Olympic games), Shalane began to adjust her nutrition and supplementation to support optimizing or maintaining optimized biomarkers directly related to performance and recovery. These biomarkers included hsCRP, a marker of inflammation, iron, cortisol, vitamin D, and vitamin B12.

Adding some favorite recipes from her cookbooks set the groundwork for her body to take on the training, racing, and traveling before she even toed the line at Berlin. With each subsequent test, Shalane was able to adjust the foods she was eating, the timing of her meals, and her hydration in an informed way.

What was Shalane fueling with? Of course, she dug into her cookbooks to grab some favorite recipes. Here’s some of what she used to fuel Project Eclipse:

Takeaway 2: What gets measured gets managed

“At the beginning of the project, my fear was getting injured or too fatigued to complete the 6 marathons," says Shalane. Balancing her many roles in work and life while still chasing her performance goals was a big undertaking, and one she wanted to do smartly after her two reconstructive knee surgeries. Shalane noted that getting consistent feedback from her InsideTracker tests and action plan throughout Project Eclipse held her accountable to make solid choices with both her nutrition and lifestyle to support her performance goals and keep her healthy.

In her test after the Berlin and London marathons, a sharp increase in inflammation, stress, and muscle damage biomarkers provided a wake-up call for Shalane to focus on nutrient timing and recovery, especially knowing that the upcoming Chicago and Boston marathons would be incredibly demanding both physically and mentally. Shalane mentioned that her refueling began immediately after she crossed the finish line in Chicago and began her travels to Boston. Once in Boston, she continued to refuel, work with her physical therapist, and ice bath to get ready to race. 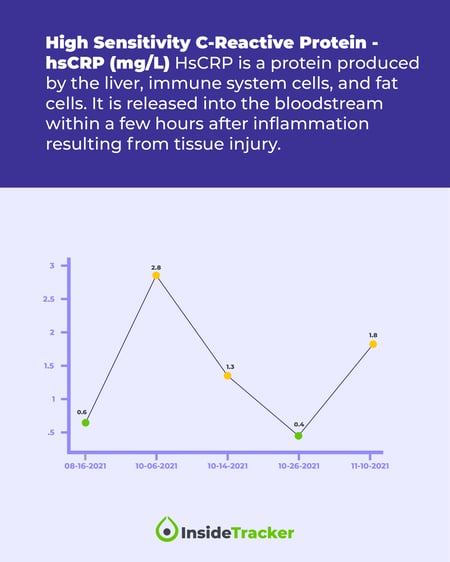 At the end of her race in Boston, Shalane felt incredible—remarkably better than after London. Her bloodwork told the same story. There was a large drop in biomarkers indicative of muscle damage and inflammation. Such biomarkers tend to peak 2-3 days post-marathon and drop back down around day seven, Shalane's results were a testament to her focus on tweaks to nutrition and physical recovery.

After retiring and taking a year off of running after her two reconstructive knee surgeries and facing her own struggles with mental health during the pandemic, Shalane fell back in love with running. Her subsequent recovery and return to running have helped her feel her best self again. When announcing her Project Eclipse plans, Shalane noted, “I want to do something that makes others feel that they can do anything. I want to help young women in sport realize the purity of the connection between physical and emotional health.” By building a strong foundation of long-term health, wellness, and resilience, she was able to achieve those goals.

When pursuing multiple big life goals as Shalane has, it’s easy to overstep, creating an unintended negative effect on health. An objective, analytical approach to monitoring the long-term wellness impacts of a high-performance lifestyle is essential to maintaining overall health while striving for performance goals.

While an emphasis was placed on the biomarkers related to muscle health, inflammation, and stress, additional biomarkers essential to health and performance were also monitored. These included ferritin to assess iron status, vitamin B12, and vitamin D. Flanagan addressed these using her InsideTracker recommendations from each test to reach her optimized zones, making minor adjustments to her nutrition and supplement routine.

By her final test just a few days after the NYC marathon, the biomarkers related to muscle health continued to decline and her cortisol levels had returned back to her optimized zone. By continuing to retest with InsideTracker, Flanagan will be able to continue to fine-tune her nutrition and lifestyle actions to prioritize her health. 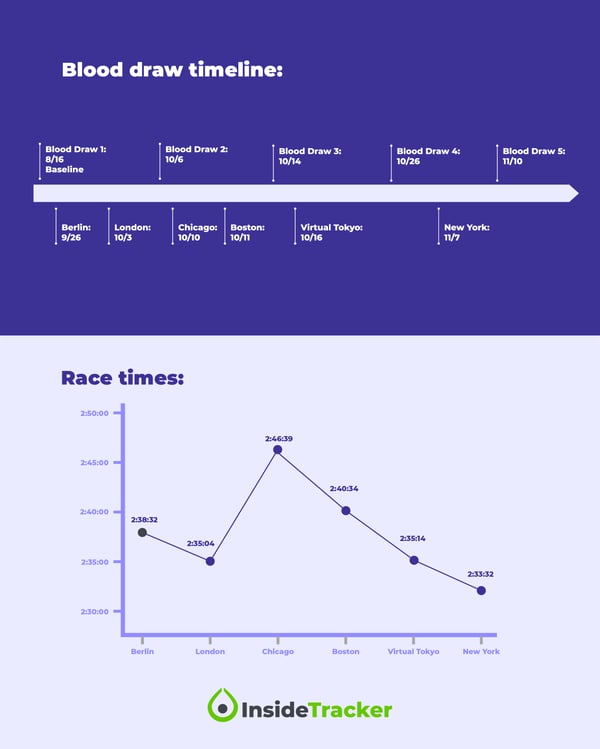 How can the average runner benefit from blood testing?

While many won’t be running six marathons sub-3 hours over the course of six weeks, the benefits of regular InsideTracker testing are apparent for athletes of all levels.

Here are the top lessons learned from monitoring Shalane’s blood biometric data throughout Project Eclipse that can apply to runners and athletes of all levels:

To learn more about how all athletes can benefit from blood testing, check out this article.

Stevie Lyn is a Content Strategist and Team Nutritionist at InsideTracker. As a Registered Dietitian and Ironman triathlete, she enjoys combining her passions to help educate others on how to fuel for overall health and performance. When she’s not swimming, biking, or running with her dog, you’ll find her in the kitchen working on a new recipe to improve her biomarkers.