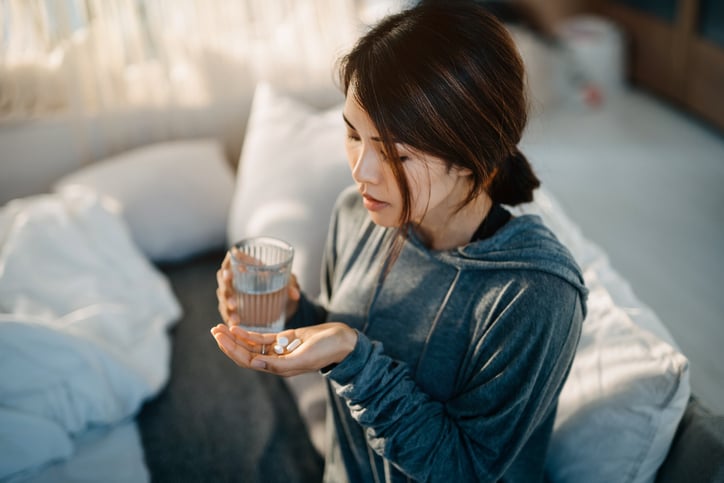 In July 2022, a study was published in the New England Journal of Medicine regarding vitamin D supplementation and a seemingly surprising lack of association with a reduced risk of bone fracture. [1] Various media outlets have covered the study, claiming that routine screening for vitamin D isn’t necessary, and that its proposed health benefits are not supported—particularly health benefits associated with reduced risk of bone fracture.

But it’s all too common that the general media draws incomplete conclusions from nutrition studies. It’s necessary to understand the purpose of a study and evaluate its limitations before drawing conclusions. So let’s take a more thorough look at the purported claims and walk through this study’s actual findings to better understand whether there are benefits to vitamin D supplementation.

Here's what you need to know about the study

The authors of this study conclude, “Vitamin D3 supplementation did not result in a significantly lower risk of fractures than placebo among generally healthy midlife and older adults who were not selected for vitamin D deficiency, low bone mass, or osteoporosis.”

Taken in isolation, it seems like vitamin D supplementation offers no benefit in reducing bone fracture risk for most people. But a paper’s conclusion should rarely be taken at face value. It’s important to understand the study’s limitations and design first.

The main limitation of this particular study? The study population didn’t consist of people who were at risk for bone fracture.

The VITAL study was a two-by-two factorial, randomized, controlled trial designed to investigate whether vitamin D3 supplementation (2000 IU per day), omega-3 fatty acids (1 gram per day) or both would prevent cancer and cardiovascular disease in men 50 years of age or older and women 55 years of age or older in the United States.

Since the study population was not notably at risk for fracture and they were not selected based on a vitamin D-deficient status, low bone mass, or osteoporosis, it’s unclear how a meaningful conclusion—specific to impact on bone fracture risk—could reasonably be drawn. Conducting research on a high-risk group, in this case, people who were at risk of bone fracture, would effectively establish a common baseline with which to show either improvement (reduced risk of fracture), worsened outcomes, or no effect against a placebo. But given this study’s population, such a finding cannot be concluded.

Vitamin D critiques raised by the findings of this study

A variety of media publications have tried to summarize the implications of this study, but many of these statements contain only partial truths. And without understanding the greater context of vitamin D research, such conclusions can be misleading.

Let’s take a look at some of the most common vitamin D supplementation critiques raised by the findings of this study and why they don’t quite ring true.

1. Routine screening of vitamin D blood levels is unnecessary for most people

The truth is that testing for serum vitamin D levels can be incredibly valuable. Understanding your blood level provides you with an objective measure of where you stand and is a relatively easy way to identify a vitamin D deficiency, which is common in the general population, particularly in northern regions of the world where sunlight is only strong enough for vitamin D synthesis for six months of the year. [2] Even if the conclusion of this study were accurate (which is not the case given its population limitation previously discussed), vitamin D plays key roles in more than just calcium absorption, and understanding your status can help you be proactive about managing your levels if they’re outside your optimal range.

The prevalence of vitamin D deficiency is relatively common, so supplementation guidance at a population level is not unfounded. However, InsideTracker promotes personalized supplementation based on an individual’s needs and goals. To understand whether vitamin D supplementation is relevant for you and how your levels shift in response to your diet and sun exposure, it’s important to get your blood tested.

3. This study debunks the notion that vitamin D alone will help prevent bone fractures in the general adult population

Vitamin D on its own is not known to reduce the risk of bone fracture in any population. It is only in conjunction with calcium’s bone mineralization functions that vitamin D plays a role in supporting bone strength. Adequate levels of vitamin D are required in order for sufficient calcium to be absorbed into the body. Calcium actively works to increase bone strength, and vitamin D helps calcium get where it needs to go.

Vitamin D is a critical nutrient that helps build and maintain bone strength, support the immune and nervous systems, and promote healthy aging. Here are a few key outcomes where vitamin D supplementation could be an important factor:

In summary, here's what you need to know

Every study has its limitations, and it’s important to understand what they are before proceeding to accept a stated conclusion. For this study, participants were not recruited based on a vitamin D-deficient status, low bone mass, or osteoporosis, so drawing a conclusion about a lack of association between vitamin D and bone fracture risk is not appropriately supported. In addition, vitamin D isn’t the only factor that supports bone strength. Adequate levels of vitamin D are required in order for sufficient calcium to be absorbed into the body, but it is calcium’s bone mineralization that supports bone strength—not vitamin D alone.

General recommendations for vitamin D supplementation are population-based guidance that are useful for advising large groups of people whose majority is commonly subject to low vitamin D. However, knowing your own levels and using blood testing to track them over time provides objective data about whether you would benefit from vitamin D supplementation and how much you need.

Everything You Should Know About Taking Supplements

Is Melatonin Safe? All About the Popular Sleep Supplement