The Connection Between Artificial Sweeteners and Weight Loss 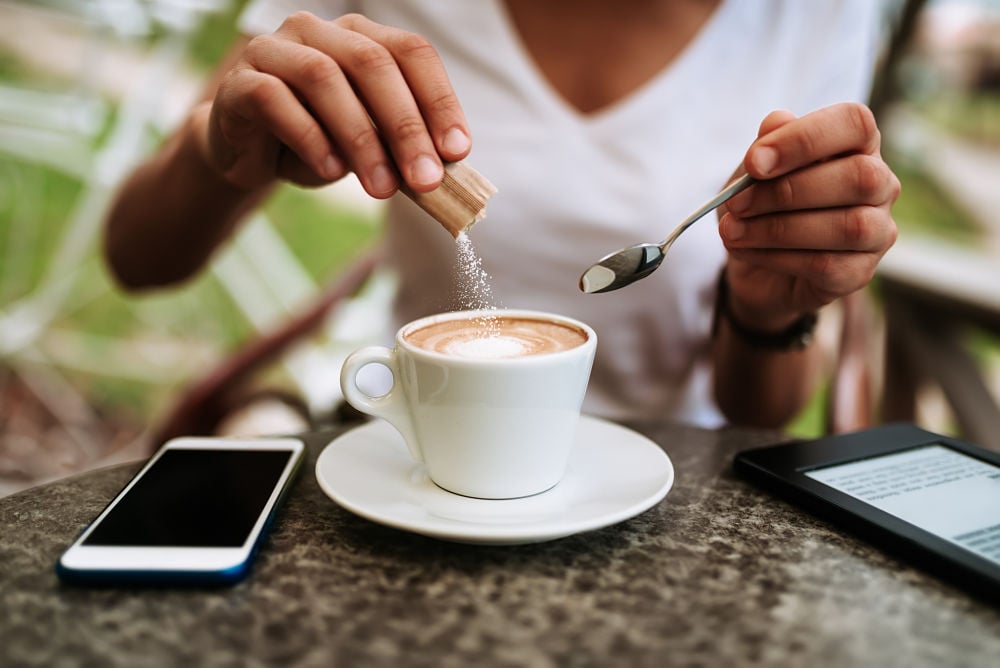 We’ve all heard of artificial sweeteners. But what are they really? Artificial sweeteners—also known as non-nutritive sweeteners (NNS), sugar substitutes, and flavor enhancers—contain few or no calories and no vitamins or minerals. They are considerably sweeter than natural sweeteners—often by orders of magnitude—so they have a much more concentrated sweetness than sugar.

Many artificial sweeteners are not metabolized in our bodies, meaning that they pass through the digestive tract unchanged and are not absorbed by the body. This explains why they don't "have" calories!

Here is an overview of the six artificial sweeteners considered safe for use in the US.1

Discovered in 1879, saccharin is the oldest-known artificial sweetener. It was the first artificial sweetener approved by the FDA, receiving a nod in the early 1970s. It contains no calories and is 200 to 700 times sweeter than table sugar. It is commonly used in cooking, beverages, and fruit drinks. Common brand names include Sweet Twin, Sweet’N Low, and Necta Sweet.

Aspartame was approved by the FDA in 1981, and it's been commercialized as Nutrasweet and Equal. Aspartame actually contains the same amount of calories per weight as sugar. However, because it is over 200 times sweeter than sugar, it's highly diluted in its commercial forms, rendering it relatively calorie-free. Aspartame is typically used in chewing gum, diet sodas (such as coca-cola), and synthetic foods.

In the 1970s, several studies on animal subjects showed harmful effects of aspartame in rat subjects. However, these studies use aspartame at much higher doses than humans could possibly consume. On the whole, research does not indicate that aspartame increases cancer risk. It is one of the most extensively studied food substances, with more than 100 studies supporting its safety for consumption in healthy humans.

It is important to mention that aspartame isn’t for everyone. People with the rare genetic disorder phenylketonuria (PKU) should restrict of the amount of aspartame they consume, as they cannot metabolize it, resulting in serious side effects. Additionally, some high-quality research studies indicate that aspartame ingestion may exacerbate headaches in people who regularly suffer from migraines. 4

The FDA approved acesulfame potassium as a non-nutritive sweetener in 1988. It is also known as aceculfame K or Ace-K and sold under the brand names Sweet One and Sunnet. It is about 200 times sweeter than table sugar and usually used in candies, beverages, and desserts. More than 90 studies (primarily on animal subjects) show that acesulfame potassium is safe. 1

Sucralose was approved as a general purpose, non-nutritive sweetener in 1998. It is typically sold under the brand Splenda and is about 600 times sweeter than table sugar. It is found in a variety of foods such as frozen desserts, baked goods, and beverages. More than 110 sucralose studies in human and animal subjects show it is safe for human consumption. 1

Neotame was deemed safe as a general sweetener and flavor enhancer in foods, except for meat and poultry, in 2002. Sold under the brand name Newtame, it is about 7,000 to 13,000 times sweeter than standard table sugar. It is heat-stable, meaning that it stays sweet even at high temperatures in cooking and baking.

In determining its safety, the FDA reviewed over 113 research studies identifying potential adverse effects on the nervous, immune, and reproductive systems. 1

Advantame was approved as a general purpose sweetener in 2014. It is about 20,000 times sweeter than standard table sugar. It is heat-stable and can be used safely when cooking or baking at high temperatures. The FDA reviewed data from 37 research studies on human and animal subjects, which collectively showed that advantame has no adverse effects on the nervous, immune, reproductive, or development systems. No studies have shown it increases cancer risk, either. 1 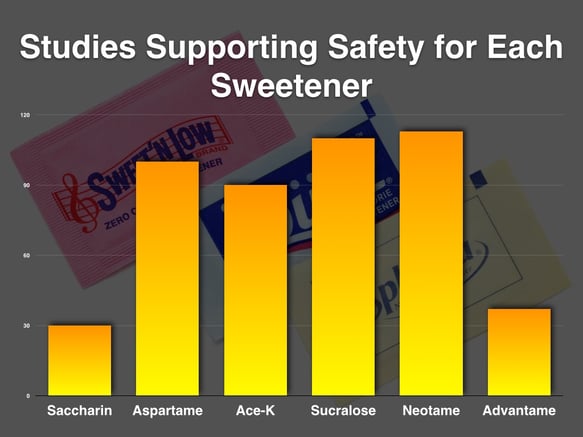 Another commonly used artificial sweetener is Stevia. It is made from the leaves of Stevia rebaudiana, a shrub commonly found in Central and South America. It is about 300 times sweeter than sugar and many soft drink manufacturers such as PepsiCo and Coca-Cola use it. However, no scientists have conducted studies on its long-term health effects.

Even though the FDA has deemed these six artificial sweeteners to be safe, this approval doesn’t necessarily mean they benefit your health. A recent study at the prestigious Weizman Institute in Israel (where our founder Gil Blander received his PhD!) raised questions about the health benefits of non-caloric artificial sweeteners (NAS). A team of research scientists fed some mice a normal diet and others a high-fat diet, and provided each group either with water containing glucose only or glucose and saccharin. The mice fed glucose and saccharin developed an intolerance for glucose, compared to the mice fed only glucose. This suggests that artificial sweeteners may contribute to metabolic disorders such as diabetes and cardiovascular illnesses. 5

As a result of this study, scientists have questioned if artificial sweeteners are healthy for human consumption. A recent examination of literature on molecular models conducted by renowned scientist Yanina Pepino stated that “taken as a whole, data support the notion that NNSs have [negative] metabolic effects.” 6

These studies raise valid concerns about the health effects of artificial sweeteners. However, at InsideTracker we know that even though a couple of peer-reviewed studies conclude that artificial-sweeteners are unhealthy, it doesn’t mean research as a whole supports that conclusion. We decided to do our own investigation and examine high-quality research studies conducted with human subjects. Below we report the research on how artificial sweeteners impact two important critical areas of metabolic health: body weight/fat and blood sugar.

Do Sweeteners Slim you Down?

Some long-term studies show a loose association between consuming artificially-sweetened beverages and weight gain. In an eight-year cross-sectional study of 3,682 subjects, researchers examined the long-term relationship between consuming artificially sweetened drinks and body weight. After adjusting for factors that contribute to weight gain such as exercise activity, diet, and diabetes, the researchers determined that subjects who regularly consumed artificially sweetened drinks had a 47% greater increase in BMI than those who did not. 7 In another epidemiological study of 78,694 women ages 50-69, researchers noticed that heavier women were more likely to consume artificial sweeteners. Additionally, “[artificial sweetener] users were significantly more likely than nonusers to gain weight, regardless of initial weight.” 8 Researchers also noticed these associations after controlling for other variables in diet.

A 2014 meta-analysis, however, supports the idea that artificial sweeteners may help with weight-loss in people who consume sugary drinks. In their review, researchers looked at 15 randomized controlled studies that included 1,951 subjects. These subjects were primarily overweight and obese and had a median BMI of 29.1. The interventions lasted from 4 to 78 weeks with a median trial of 30 weeks. Most subjects were adults; however, 4 studies were conducted exclusively with children. The largest study included 632 children in a parallel-design study, and the smallest included 19 adults.

After analyzing the data, the scientists determined that subjects who had participated in an intervention containing artificially-sweetened beverages lost, on average, 0.80 kg (1.76 pounds) more body weight than subjects who consumed sugar-sweetener beverages. 9 Additionally, compared to the control conditions, artificially-sweetened beverages reduced BMI by an average of 0.24 kg/m2 and fat mass by 1.10%. 9 The researchers concluded that “data from RCTs, which provide the highest quality of evidence for examining the potentially causal effects of [low-calorie sweetener] intake, indicate that substituting LCS options for their regular-calorie versions.” 9

Even though these decreases are modest, they indicate that low-calorie sweeteners may be a useful tool in promoting weight loss when utilized with other methods such as a diet including whole foods rich in fiber, physical activity, and other behavioral health changes. Losing weight can also lower your c-reactive protein (CRP), a key indicator of aging measured in our InnerAge and Ultimate Panels. 10

Key takeaways about the effects of artificial sweeteners on weight:

Lowering or Increasing Your Blood Sugar?

Some scientists suspect that artificial sweeteners may counterintuitively increase your blood sugar. In a 14-year epidemiological study, researchers followed 66,118 women and assessed their consumption of sugar-sweetened beverages (SSBs) and artificially-sweetened beverages (ASBs) with the risk of type 2 diabetes. After the 14-year study, there were 1369 new cases of diabetes. Women in the highest fourth of ASB and SSB consumption had a higher chance of developing type 2 diabetes. 11

However, this study had several design flaws. It lumped SSBs and ASBs into one category instead of looking at ASBs as an independent factor. Additionally, it was an observational study, meaning that it observed only correlation and not causation. As a result of their study’s limitations, the authors stated “We cannot rule out that factors other than ASB consumption that we did not control for are responsible for the association with diabetes, and randomized trials are required to prove a causal link between ASB consumption and T2D.” 11

Another epidemiological study on middle-aged men yielded similar findings. In 1986, researchers recruited 51,529 male health professionals aged 40-75 and followed them for 20 years. At the end of the study, there were 2680 new cases of type 2 diabetes. After adjustment for co-factors, scientists determined that men in the upper quartile of SSB consumption were 1.25 times more likely to develop type 2 diabetes than men in the lowest quartile. 12 The researchers noticed a correlation between ASB consumption and type 2 diabetes. However, the researchers elaborated that “the association between artificially sweetened beverages and type 2 diabetes was largely explained by health status, pre-enrollment weight change, dieting, and body mass index.” 12

A recent meta-analysis by the American Heart Association revealed only four randomized-controlled studies on human subjects assessing the impact of consumption of artificial sweeteners on glucose and other metrics of diabetes. 13 These studies, which lasted from 1 to 16 weeks, did not find significant differences between groups in regards to glucose and other measures of diabetes (i.e. sucrose, HbA1c, etc.). 13 This suggests that consuming foods with artificial sweeteners won’t increase your blood sugar- but they won’t lower it either if it’s already high. However, more research needs to be done to further illustrate the effects on artificial sweeteners on blood sugar.

Key takeaways about the effects of artificial sweeteners on blood glucose levels:

The Skinny on Sweeteners

Some experts argue that artificial, low-calorie sweeteners make you fat, cause diabetes, and increase your risk of cardiovascular diseases and cancer. However, these claims are not supported by the FDA or high-quality, randomized research studies on healthy human subjects. A handful of compelling research suggests that substituting sugary drinks with artificially-sweetened drinks, by not adding extra calories, may help you lose weight and also help you optimize biomarkers such as C-reactive protein (CRP). Limited research has been done examining the effects of artificial sweeteners on blood glucose, and its effects on this biomarker are not well understood. As a whole, the available research indicates that artificial sweeteners have little to no effect on blood glucose. It is important to note that people who suffer from conditions such as migraines and PKU avoid artificial sweeteners.

3. European Food Safety Authority. Opinion on a request from the European Commission related to the 2nd ERF carcinogenicity study on aspartame. 2009. Accessed at www.efsa.europa.eu/en/scdocs/scdoc/945.htm on April 13, 2010.