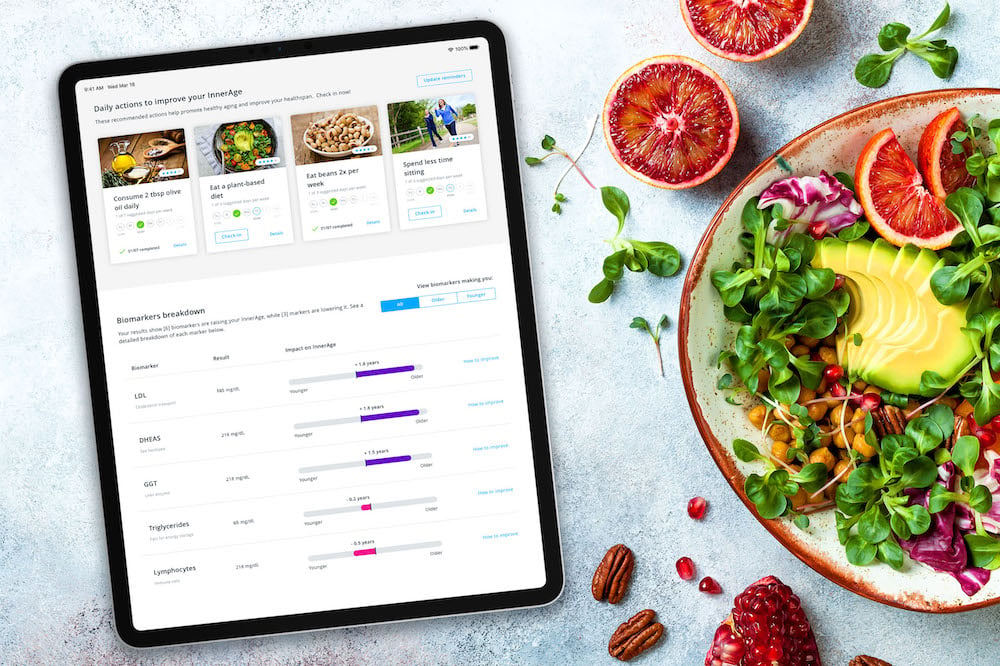 The truth is people age at different speeds—some faster, some slower. The number of birthdays you’ve had doesn’t necessarily reflect your body’s internal, biological age. An age of 40, for example, can look incredibly different from one person to the next depending on a combination of lifestyle and genetic factors, like diet, exercise, stress, and sleep.

Learning your body’s internal age, or your InnerAge, may seem daunting at first, but it's a powerful catalyst to learn how to take control of your health and wellness. InsideTracker’s InnerAge has been a revolutionary tool in helping people significantly improve their healthspan. But as the science of aging has matured, so too has our model. After years of research and development, our team reimagined, redesigned, and reengineered the pioneering product InsideTracker first launched in 2015. With greater accuracy and precision, less sensitivity, and more sophisticated tracking and visualization tools, we’re proud to announce the new InnerAge 2.0—one of the most innovative systems to optimize healthspan and longevity!

InnerAge 2.0 provides a complete understanding of the aging process. It accounts for factors and biomarkers most strongly linked to healthspan (e.g. glucose, inflammation, triglycerides), and reveals both how well your body is working and how well it should be working given your chronological age. Because our daily habits and actions can positively impact the aging process, we also have the power to improve our InnerAge. The new InnerAge 2.0 provides ultra-personalized nutrition and lifestyle recommendations to improve your healthspan. By following these recommendations in the science-backed Action Plan provided with InnerAge 2.0, you can improve the quality and quantity of your years ahead.

Over the past five years, not only has the science of aging evolved, but so too has our society’s view on the importance of healthspan. Healthspan focuses on the preservation of both our physical and mental health as we age, and not just the length of time we are alive. The InsideTracker team has added a host of new features and improvements to InnerAge 2.0 to account for the continuously advancing science of healthspan. We turned to our own data from InsideTracker users to identify biomarkers most strongly related to aging and combined this with machine learning to redesign our model calculating InnerAge and the steps needed to lower it. Let’s take a look at what’s changed in this new and improved version. 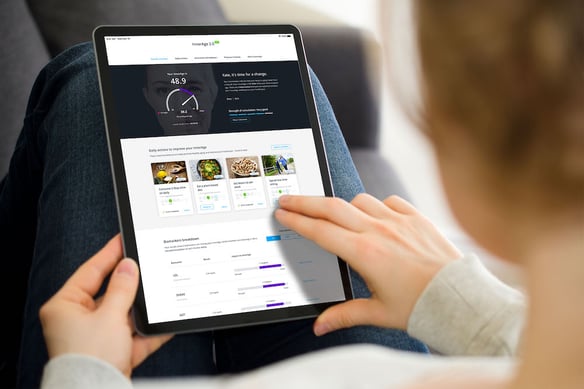 We increased the number of biomarkers in InnerAge 2.0 by over three times, providing more personalized and accurate estimates of biological age. The previous InnerAge took into account six biomarkers for both men and women while InnerAge 2.0 has expanded to account for 14 biomarkers for women and 18 biomarkers for men. Our list of biomarkers range from those related to cardiovascular health like LDL (‘bad’) cholesterol to those focused on liver function like GGT. This updated list also includes biomarkers related to inflammation, immunity, blood oxygen saturation, and BMI, to name a few. Therefore, improving your InnerAge improves more than just your biological age, it also means strengthening your body's ability to protect itself from disease and infection.

To select this new list of biomarkers in our InnerAge 2.0 model, we turned to our team of data scientists. They analyzed dozens of biomarkers from tens of thousands of InsideTracker users to identify the biomarkers most strongly correlated with age. The data, for example, displayed a connection between blood glucose and age—a lower glucose level is associated with younger age, and vice versa. So, if your blood glucose is lower than the average for your age and gender, your InnerAge will lower accordingly.

In the first version of InnerAge, our team of scientists used a research-based approach to identify the top biomarkers most strongly linked to aging. For InnerAge 2.0, we identified the biomarkers most strongly connected with aging within our own dataset. This shift to a data-driven approach helps us to deliver even more precise InnerAge calculations. How so? Data from scientific literature is mainly based on sick people, whereas InsideTracker users are generally more active and health-conscious than the average population. This is an important distinction when it comes to aging, as healthier populations tend to have healthier average levels of biomarkers at every given age. Therefore, InnerAge 2.0 holds you to a higher standard, set by your very own peers, to provide the most accurate depiction of your InnerAge.

A more robust and steady calculation

After identifying the InnerAge 2.0 biomarkers, each was weighted for the importance of its contribution to your overall InnerAge. This is based both on the variability of each biomarker at a given age (population variability) and its variability over time (age variability). Our new InnerAge algorithm compares each of your biomarkers to your peers in age and sex to calculate the distance between your values and the average, adjusts its contribution based on their importance weights, and then determines the contribution of each one to your InnerAge. For example, both blood glucose and the liver enzyme GGT are included in the InnerAge 2.0 model. But because glucose was found to be much more strongly correlated with age than GGT, it’s assigned a higher weight to your overall InnerAge. 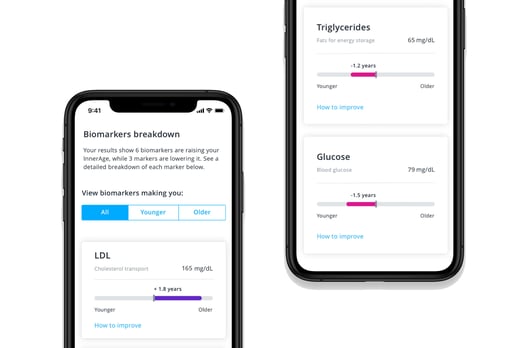 The increased number of biomarkers and their contributions also means that your InnerAge is more stable and less sensitive to daily fluctuations of individual biomarkers. Because InnerAge 1.0 included only five biomarkers, a change in one could result in several years difference to your InnerAge. In InnerAge 2.0, even the most highly weighted biomarkers are balanced by the rest of the calculation. You will still observe how a change in a single biomarker impacts your overall InnerAge, but this change is now more accurate and takes into account a bigger picture of all your biomarkers.

As more and diverse populations use InnerAge 2.0, our dataset will continue to grow over time. Our new model uses machine learning to ensure the InnerAge algorithm constantly updates to reflect these data. By adding more data as well as new biomarkers like resting heart rate and body fat, the InnerAge algorithm will become increasingly more precise and accurate.

The flexibility to add-on to existing panels

We designed InnerAge 2.0 with flexibility in mind—you can either purchase it on its own or add it as an upgrade to a variety of InsideTracker blood tests, including our DIY Plan. Our new strength calculation feature shows the accuracy at which each test can predict your InnerAge. The more biomarkers you have from an existing test, the more accurate your InnerAge strength calculation will be. For example, our Ultimate Test, which includes all InnerAge biomarkers, will provide the strongest InnerAge calculation. However, since a minimum of only five key markers are required for an insightful base level reading, simpler InsideTracker tests like Vitality will still provide a basic understanding of your biological age.

While measuring your InnerAge is important, tracking the positive progress you make over time is the most accurate way to keep you on the right track towards your goals. If you choose to go further and prioritize InnerAge in your Action Plan, you can select our new InnerAge goal. This advanced feature guides you through a science-backed action plan that incorporates recommendations that not only target the specific biomarkers to lower your InnerAge, but also optimize overall longevity and healthspan

As you track your progress over time, you can check in with your InnerAge Progress table, which identifies the specific influence each biomarker has on your InnerAge, allowing you to visualize the impact of your lifestyle changes on your individual biomarkers and overall InnerAge. The graph feature in your InnerAge Progress section goes even further—it shows you future InnerAge scenarios by illustrating your potential best (if you follow your action plan!) and potential worst InnerAge. You can also look to  your past and see how the relationship between your chronological age and InnerAge has changed over time.

At $179 as a stand-alone plan or $99 as an add-on, InnerAge is an incredible way to measure and then take the proper actions to optimize your healthspan and complement your health and wellness journey over time. InnerAge 2.0 provides unique data plus actionable value to deliver a winning combination.

Diana is a Content Strategist and Team Nutritionist at InsideTracker. As a Registered Dietitian and self-proclaimed "biohacker," Diana enjoys researching and testing the latest trends and technology in the field of nutrition and aging. You'll often find Diana , completing a 24-hour fast, conducting self experiments, or uncovering strategies to increase longevity. Follow her on Instagram at @dietitian.diana.

Catherine is a Nutrition Scientist at InsideTracker. As a Registered Dietitian with a background in laboratory science, Catherine enjoys staying on top of the latest nutrition research and finding new topics for InsideTracker recommendations. When she’s not reading papers, Catherine can be found exploring new hiking trails and testing new tactics for working from home.