Amelia Boone is a Spartan Race Pro who is no stranger to big challenges. In addition to being one of the best in the world at racing through impossible obstacles (she won the Spartan Race World Championship in 2013) and beating most of the boys while she's at it, she is also a successful, full-time corproate attorney. Naturally, we had to catch up with Amelia to find out just how she juggles all the demands of two such roles... and stays healthy in the process.

When offered the chance to test her blood with InsideTrack through our partnership with Spartan Race, Amelia jumped at the opportunity: "For me it's a really neat, kind of nerdy thing to track," she smiles. "It's been cool... I was really interested in levels of inflammation and things like that, that have an impact on athletic performance."

Watch the video for Amelia's tips!

03:25 - Inflammation, cortisol and the importance of recovery

07:45 - Tips from a Pro for aspiring Spartan Racers

We want you to have the most optimal body and life you can have... That's why we've created this handy FREE guide to help you get an Inner Edge!

Erin: All right guys, well you may have seen her on television, on billboards, in ads online and pop ups through Spartan. Amelia Boone is a Spartan Race Pro, you see her for good reason. She’s beautiful. She’s fit. She obviously does a good job at what she does there at Spartan and also she’s a fulltime attorney. So Amelia what we all would really love to know is what’s you role with Spartan Race as a pro, also being an attorney at the same time, and how you came to Inside Tracker?

Amelia: Yes, I’ve been doing obstacle racing for probably the past five years or so which is really all the times it has been around. I’ve been on the Spartan Race pro team for the past two or three I believe. It’s travelling around; it’s racing a series of races throughout the year, throughout the World Championships, we build that every year. It’s just going around representing Spartan Race and getting out there and getting competitive.

Erin: And so you came to Inside Tracker through our relationship with Spartan?

Amelia: Yes InsideTracker. I was really interested in - they partnered with Spartan Race and were looking for athletes that were interested in these biomarkers and looking at their results and what’s going on inside your body to optimize how you perform and in your performance in races. So I jumped on that opportunity because for me it’s a really cool, neat nerdy thing to track so it’s been cool.

Erin: Were you aware of the power of biomarkers before that, or was this a concept where some people say, “Well I thought that I’d get that done at my yearly physical and then I just ignore it unless my doctor says something.”

Amelia: I read a fair amount and so I’m your Internet scientist along with everyone else. I was aware of certain responses in the body and certain levels within the body can affect your athletic performance but I never really had those tests measured. I was really actually interested in levels of inflammation and other things like that, that have an impact on athletic performance. So that was an actually really cool aspect of Inside Tracker, to see that.

Erin: So you’ve really taken full advantage because you’ve had three tests you told me already. Talk about that – I always ask people what the biggest surprise was for them or what the most interesting impactful point was throughout that testing.

Amelia: Well first of all, strangely I found out that I had a high cholesterol which nobody would expect and I was like, “What?” and actually over the course of three tests and with some diet and modifications, it has gotten down so that’s cool. But from an athletic perspective really just the measurement of inflammation and cortisol and things like that that shows, for instance, that I wasn’t getting an adequate recovery between my training and working fulltime. I know that there’s a lot of stuff that I skipped out on mainly like sleep. So just getting those markers and seeing, “Wow, I have really high levels of inflammation in my body and what can I do about this” and so working with Inside Tracker team to figure that out.

Erin: I love that you were clearly embarrassed about your cholesterol as an athlete. I could tell on your face because I was the same way. I’m like, “How is it possible that my LDL is even remotely high when I extensively eat and exercise healthier than anyone else I know?” So I saw that on your face I was like, “I’ll tell you, mine was the same way"... until I added Chia seeds.

Amelia: I think that’s in genetics.

Erin: Right, yes that too. So talk a little bit about that stress and that cortisol because you have this fulltime career as an attorney which most attorneys don’t have time to also run insane obstacle courses across the country and in other time zones. So sleep obviously, I’m assuming, and recovery is probably an issue for you.

Amelia: Yes, I mean I think for sure, I get into the cycle of overtraining like everybody; we get into this attitude that more is better and to keep pushing yourself, it’s just how we are. But actually I’ve had tests done after a hard race and just seeing how the levels were all over the place, whereas doing a test when I’m in a down cycle where I am getting more recovery, I’m like “Oh okay. My body is much happier right that”. This trade off – you learn that through these test results that sometimes less is more.

Erin: Is that your main takeaway or I don’t know, is there a food that you’re eating now or something that you’re doing now that you found through the test that has been helping?

Amelia: Well, I started eating oatmeal for the cholesterol and it’s like, “Oh my God”. I think the big takeaway for me with the results especially with the inflammation markers is really just focusing on the recovery and getting sleep; it’s the main thing for me so I’ve made some adjustments to do that, not so much dietary. There are certainly some anti-inflammatory foods so I’ve been trying to limit my consumption of Pop Tarts and increase fatty fish and things like that.

Erin: Pop Tarts or fatty fish? Some people do prefer – I prefer the fish but I’m sure some people watching are like, “You’re kidding me right?” However, it just goes to show someone as accomplished – I mean Amelia things that you do as a Spartan Race Pro are just mind blowing. Most humans are not doing that and you look fantastic too. No one can see you right now, they look at your posters online they’ll see this woman is in tip top shape. It just goes to show that you can’t judge a book from the outside, by its cover, all the time.

Erin: I felt the same. I don’t know. I felt humbled by my LDL levels.

Amelia: I don’t know, you look at like Inner Age results and you’re like, “Oh” on the outside everybody’s looking at me and like, “Oh she’s super thin she does all that stuff” but just because you can appear like that and perform like that for a certain point, your body might not hold up for that long so you look inward and figure out what’s going on in there.

Erin: Yes, it’s the proactive approach instead of the reaction approach. Don’t wait until its breaks to fix it, especially not when you’re climbing one of those crazy walls. In closing then, I would just love to know for the aspiring Spartan Racers out there what’s you tip whether they want to be a pro like you or just do a race?

Amelia: Yes, I think that especially when you’re starting out it’s really easy to look at, “Oh these are what the pros are doing” you see especially, like on social media, these are these super hard workouts and I have to do that. I think people tend to bite off more than they can chew at first. Remember that you’re not going to go out and dunk like LeBron, you have to ramp up and you have to do that. You also have to realize that what you see on the social media is not always necessarily real life and so for me it’s about performance and doing a lot of Spartan Races. It’s about being in tuned with your body and being in touch with your body and recognizing limitations sometimes and then just going slowly. I tell people that want to go on Spartan Race, “Anybody can get through it. It may not be pretty you may have to walk a bunch. But you start out somewhere and then just prepare that it could be a long process.” But they’re fun and so I just tell people just sign up, just do it.

Erin: Just have fun, that’s what your colleague Joe Di told me.

Erin: “Just do it!”. He’s the most exuberant person ever [laughs]. Anyway thank you so much.

Amelia: Of course, thank you. 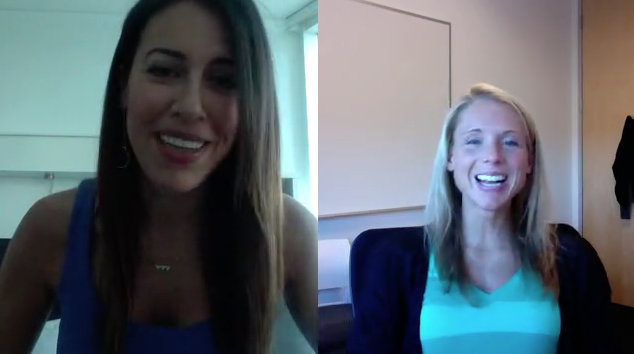