It’s great to have choices. But you’re busy. And you don’t have time to filter through endless options. You’d like a guide to the best choices — a scientific one, if possible!

So, how do you pick the recommendations that will work best for you? Don’t stress! InsideTracker has a brand new system in place to help do the job.

Star ratings to the rescue!

To help you choose from a wide array of recommendations, InsideTracker scientists have created a scientifically sound Star Rating System.

Here’s how it works: Each recommendation receives from 1- to 5-stars, with 5-stars being the strongest rating. Star ratings are based on peer-reviewed, scientific studies supporting each action and its effectiveness.  All InsideTracker recommendations have at least one primary research source and most have secondary sources. Our star system reflects the strength of the science behind each recommendation.

So, why do we include 1-star ratings? Well, it isn’t like Yelp. A rating of less than 5-stars doesn’t mean it’s a bad apple. We wouldn’t include any recommendation that wasn’t scientifically solid — there’s a high bar each recommendation must meet! It just means that once a recommendation meets the InsideTracker standard, the strength of its scientific backing can vary within an acceptable range. In this way, our Star Rating System allows for greater transparency.

How are stars determined?

To ensure that our ratings remain unbiased, InsideTracker scientists have taken care to avoid assigning the number of stars to recommendations by themselves. Instead, we use a formula to calculate a “star grade” for each recommendation. There are 7 factors in this formula; each factor is worth a certain number of points. When all the points are added up, an algorithm converts the points into the stars.

As an example, let’s take a look at one 4-star InsideTracker recommendation to see how it is determined: 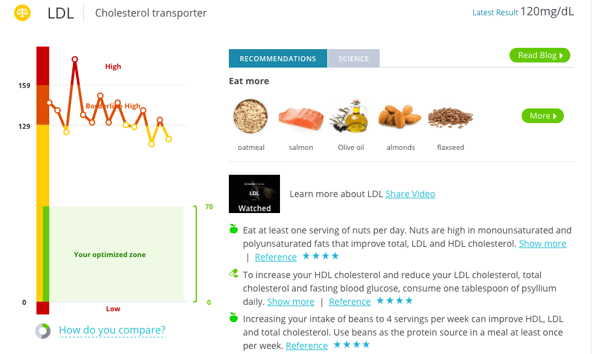 “Eat at least one serving of nuts per day. Nuts are high in monounsaturated and polyunsaturated fats that help to reduce LDL cholesterol.”

Using the above recommendation as example, we'll walk through the 7 questions that InsideTracker scientists asked in order to rate it:

1. How much research backs it up?

The more related studies there are for a recommendation, the more points it receives.

In this example, there are three sources for the recommendation.

2. Which scientific journal published the study?

The impact factor of a journal represents how important a journal is in its field. If the journal has a high impact factor, the recommendation gets more points.

3. How recently was the study done?


Scientific knowledge is constantly increasing. Research done since 2010 gets the most points; older studies get fewer points.

In this example, two of the three studies on the effect of eating more nuts have been done since 2010.

4. How many people participated in the study?


The size of study is important. The larger the group of people in the study, the more statistically significant the results are likely to be.

In this example, the primary source reviewed studies that included more than 2500 participants and showed the benefits of eating at least one serving of nuts each day. Another source used was a meta-analysis that reviewed studies involving more than 500,000 people. Study size adds strength!


The highest ranked sources are meta-analyses, which evaluate data drawn from multiple studies.

In this example, All three sources for InsideTracker’s advice to eat nuts at least once a day are meta-analyses — they combine knowledge gained from dozens of studies. More knowledge means more strength.

6. What is the outcome of the study?

The outcome could be a change in the biomarker level, a change in your risk of getting a disease, or even an increase in your longevity. Studies that evaluate your risk of disease accrue a higher number of points than ones that look only at the effect on your biomarkers.

In this example, the primary study for this recommendation evaluated the effect of eating nuts regularly on the amount of unhealthy fats such as low-density cholesterol (LDL) in the blood.

7. What is the effect of the change that the scientists studied?

The impact of the effect of each outcome must be considered.

In this example, eating at least one serving of nuts a day resulted in an average decrease in LDL of 4.8 mg/dL in the blood.

Add up the points from questions 1-7 above, and you get a 4-star recommendation: Eating 1 serving (about ¼ cup) of walnuts each day to reduce the level of LDL cholesterol in your blood. It’s a simple change that could make your life a little healthier.

Science moves forward... and so do ratings!

The best scientists are the ones who constantly question and revisit conclusions.  Don’t be surprised if the number of stars for a recommendation changes. Our scientists are always on the lookout for new studies.

Sometimes, new research shows that the effect of a dietary or lifestyle change is less than originally thought and  a 4-star recommendation might become 3-star. On the other hand, a new study might provide even stronger support for a recommendation; that could add a star.

No matter how many stars a recommendation has, all the actions that InsideTracker suggests for optimizing your health and performance come from thousands of peer-reviewed scientific research studies. And they are all chosen for you, based on your unique characteristics, goals, and blood analysis. At InsideTracker, you’re the star!