Stressed Out? Try Some Ashwagandha 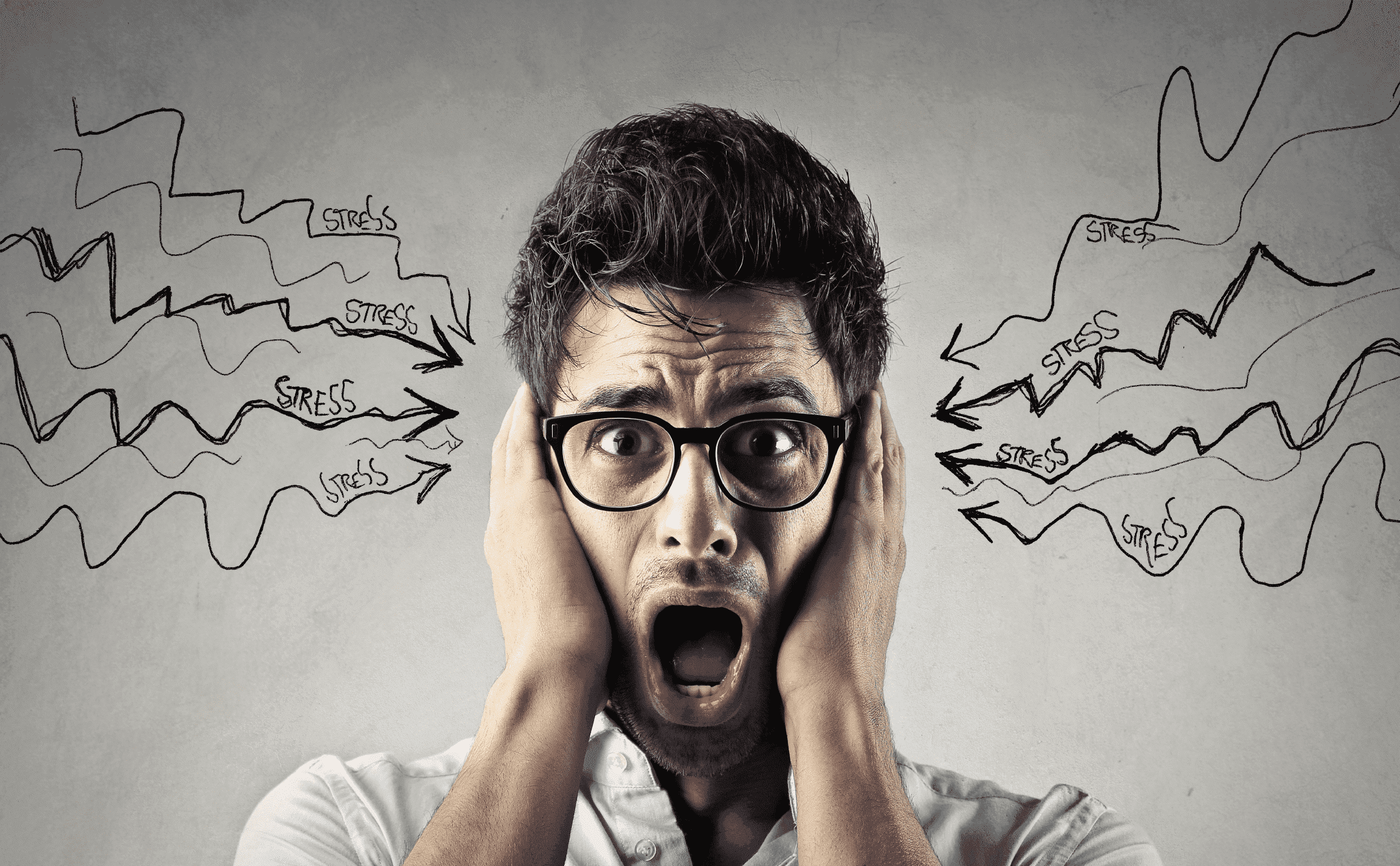 There’s no hiding it. We are stressed. If our users are representative of the U.S. population, we have a serious stress problem on our hands. From traffic and finances, to marital spats and annoying coworkers—we are feeling the pressure.

Our personality types might even predispose us to go over the edge. Type A personalities may be beneficial for success in the business world, but a constant loop of every bad decision or thing you forgot to say for the past 20 years isn’t helpful, and it’s taking a toll on your health. We’ve found a supplement that might help! While it can’t change your circumstances or your personality, it can help your body deal with the stress a bit better.

It was pretty shocking to discover that a substantial fraction of InsideTracker users have high cortisol levels. Cortisol, typically deemed the “stress hormone,” is a steroid hormone produced in the adrenal glands and released into the bloodstream in response to stress. Some key functions of cortisol: increase blood sugar and suppress the immune system. Not the most favorable functions, but evolutionarily they were important!

A brief history of stress

Picture this: 5,000 years ago our ancestors are enjoying a nice Sunday stroll through the Serengeti discussing the latest tribal happenings when all of a sudden, a lion jumps out from behind a tree and starts chasing them. Cue panic, immediate stress, and running. Their stress causes the release of cortisol, which goes to work breaking down muscle to produce glucose, and hopefully, provide them sustained energy to outrun their predator. At the same time, cortisol is also preventing the release of inflammatory responders—there’s no time for R.I.C.E. (rest, ice, compression, elevation) to deal with swollen ankles during this time!

Today, the majority of us aren’t being chased by wildlife on a daily basis, but our body has the same response to the stress caused by a deadline, pressure to succeed, a lover’s quarrel, or that embarrassing time you spelled vacuum wrong during the fourth grade spelling bee that you choose to relive before falling asleep every night. Important side note: lack of sleep also causes high cortisol!1 Sleep is integrally tied to our overall health, and especially to our athletic performance and cognition. Whether it’s on the field or in the boardroom, you need sleep to be on top of your game.

Definitely our most mispronounced supplement, Ashwagandha has been used in Ayurvedic medicine for centuries, similar to garlic. It is made from the roots of the plant Withania somnifera, which is mostly cultivated in India, and it is also referred to as King of Ayurveda, Indian Ginseng, and Wintercherry. Translated, Ashwagandha means “smell of horse,” because the root reportedly smells strongly horse-like. But don't worry, it doesn't smell in supplement form! Additionally, it is believed to bestow the strength and virility of a horse onto those that take it.2

Our interest in Ashwagandha was piqued due to its effect on cortisol, but it has also been used to combat anxiety, depression, insomnia, inflammation, and immunosuppression related to stress along with a laundry list of other ailments.3 Interestingly, some research has also been conducted to investigate Ashwagandha’s potential role in the suppression of cancer growth by inhibiting angiogenesis (establishment of blood flow) and metastasis (spread to other tissues), as well as bolstering the immune system when coupled with traditional cancer treatments.4

Why we recommend it

For our purposes, we are going to focus on its categorization as an adaptogen. An adaptogen is a substance or ritual that helps our body deal with the physical manifestations of stress; namely, the hormonal response from our adrenal system. Unlike traditional drugs, adaptogens may not have a known molecular target, meaning that their mechanism of action is not specifically known. Without getting too complicated: it seems to affect both the chicken and the egg causes of stress. More in depth, some research suggests that Ashwagandha directly inhibits the release of cortisol from the adrenals.5 Ashwagandha may also reduce the perception of stress, meaning that very stressful things don’t seem as bad when taking Ashwagandha. A proposed mechanism is that Ashwagandha prevents an enzyme, NAPDH-d, from activating during perceived stress, which interrupts the usual neurotransmitter fluctuations of stress.6

In one study, researchers investigated the effects of Ashwagandha on individuals that categorized themselves as suffering from chronic stress. They completed a perceived stress assessment and serum cortisol tests before and after 60 days of taking 300mg of Ashwagandha twice per day. After the 60 days, those taking Ashwagandha reported a 44% decrease in their perceived stress scores, whereas individuals receiving placebo did not report a significant improvement. In other self-reported measures, individuals taking Ashwagandha reported drastic improvements in perceived depression, anxiety, insomnia, and social dysfunction—roughly a 70% reduction in all of them. Most surprisingly, serum cortisol levels dropped by a whopping 28% compared to baseline measurements, on average about -4.4µg/dL.7

Another study measured the dose-dependent response of daily Ashwagandha. Four groups were randomly assigned to receive placebo or differing doses of Ashwagandha per day for 60 days. Across all levels of Ashwagandha dosage, self-reported fatigue, loss of appetite, “feelings of impending doom”, inability to concentrate, irritability, forgetfulness, and sleeplessness all significantly improved compared to placebo. Serum cortisol dropped by 30.5% (-4.3µg/dL) in the 500mg group.8

Who we do not recommend it for

Ashwagandha should not be taken if you are pregnant due to the lack of research on pregnant women. Also, people who are allergic to other members of the nightshade plant family, Solanaceae, should avoid it. Lastly, there is no NSF certification for any Ashwagandha supplements at this point, so it may not be suitable for professional athletes undergoing drug tests.

My experience with Ashwagandha

As the Lead Nutrition Scientist at InsideTracker, I'm all about taking a taste of my own medicine (and so are my colleagues - see here). I am VERY good at stressing myself out over nothing, so I tried Ashwagandha for 60 days to see how it would impact my feelings of stress and my cortisol levels. Our recommendation for individuals with elevated cortisol is to take 300mg twice per day (once at breakfast and once at dinner) for 60 days. 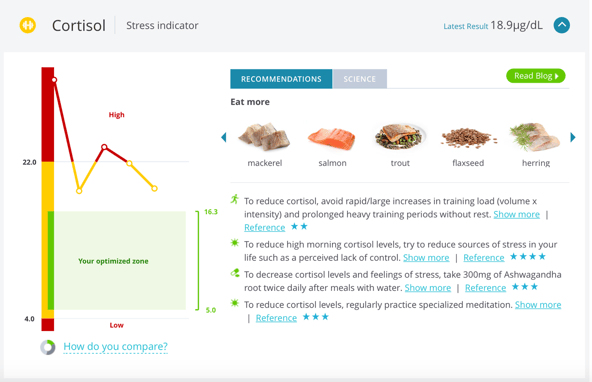 My levels reduced from 23.7 to 21.8 µg/dL. Not as large of a decrease as some of the studies cited, but I am impressed that I reached the “normal” zone considering the circumstances. This test was 2 days before Christmas and right after my last set of exams to complete my Master’s degree. If anything, I think Ashwagandha mitigated the increase in cortisol that should have occurred. I am counting it as a victory! Sleep has never been an issue for me and I make a serious effort to include other stress relieving activities such as yoga, meditation, swimming, and alerting myself to non-productive thoughts. Managing stress is a work in progress for me but I am making strides. I should add that I did feel less frazzled than usual during this time (totally subjective) and had the craziest dreams!

Without InsideTracker, I wouldn’t know how my mental stress was physically affecting me. I also wouldn’t have sought out strategies to deal with it. Tracking my cortisol level has been eye opening. Ashwagandha is just one strategy we recommend for reducing cortisol and wrangling your anxiety to manageable levels. Maybe you just need one change, or maybe you should try them all—but we all could use some stress relief.

[1] Guyon A, Balbo M, Morselli LL, et al. Adverse Effects of Two Nights of Sleep Restriction on the Hypothalamic-Pituitary-Adrenal Axis in Healthy Men. The Journal of Clinical Endocrinology and Metabolism. 2014;99(8):2861-2868.