Many of you may know me as the Sales Manager here at InsideTracker. What you may not know, is that when I'm not at my desk, I can frequently be found hitting the pavement alongside many of our users. I run to and from work most days, actively participate in November Project workouts (more on that later), and have run 3 marathons with another on the horizon.

Having recently spent a week in Los Angeles leading up to the Olympic Marathon Trials, I wanted to share the top five lessons I learned from the best marathoners in America, many of whom are InsideTracker users!

By the time the Men’s race started at 10:00 a.m. the temperature had already reached 70 degrees and steadily climbed from there. The towering skyscrapers of Downtown Los Angeles provided no shade on the route, nor was there a cloud in the sky. With conditions like these, it turns into a mental battle: how long can you hang on when you’re at your worst? Your keys to success: proper fueling, hydration, and stress management.

Cortisol, the stress hormone, is a useful way to measure how your body (and mind!) is responding to your training on a daily basis. Is it too much? What things can and should you do to help improve? 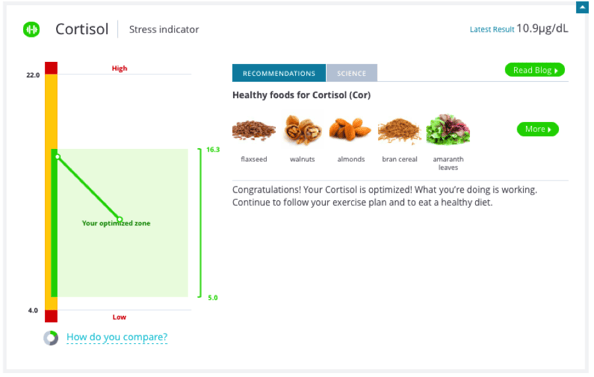 2. Adjust to your destination's time zone in advance

When possible, do your best to adjust to your destination's time-zone in advance. Shift your bedtime and waking time by a couple of hours in the week leading up to your trip. Knowing how tough jet lag was the last time I was in California, I aimed to go to bed two hours later and wake up an hour later in the week leading up to the Trials. On the day I traveled, this meant I either needed to break the routine, or skip a workout. My coach and I both agreed that skipping the workout that morning in favor of a later wake up was well worth it.

While traveling cross country and while preparing the body to train and compete at a high level, gut health is something more and more people seem to be focusing on. There are companies designing probiotics specifically for athletes. Our friend Mike Wardian works with Sound Probiotics, and I’ve been taking their probiotic for the last month as well. Too often we find ourselves getting sick after flying or racing. By improving your gut health, you can reduce the likelihood of this happening.

Generation UCAN invited the InsideTracker team to a post race meet and greet with Meb (Mebrahtom Keflezighi), who made the Olympic Team for 2016 and placed second overall. Meb spoke about how his family makes so many sacrifices that the average fan isn’t aware of. His message hit home with the elite athletes in the room. Andrea Duke, 2016 Olympic Trials runner wrote, “Surround yourself with people that believe in you. In order to accomplish your goal, you need to have full support in all aspects of your life.”

"You'll recover faster from your workouts if you're a positive person." Paraphrasing again from the post race event with Meb, and the science certainly supports it. Our team loves November Project workouts (located in 30 cities across North America and Europe) for the positivity and incredible energy that surrounds the workout. Hugs are encouraged, and a “Positivity Award” is given to members that consistently push others to be their best. Don’t sweat the small things, and be sure to check out some of our blogs on how to manage stress effectively through diet and lifestyle.