The Lean Machine: How Your Body Fat Affects Your Health and Biochemistry

Visible fat people fear, yet, this fat might not be the only villain with health and human performance.  There is a more dangerous factor than just body fat percentage, the distribution of fat, linked to numerous health risks. In this blog, we will explore the importance of body fat distribution, and, how it affects our health. We will evaluate the research on waist circumference (WC) – not weight – and how it affects biomarkers such as fasting glucose, high-sensitivity C-reactive protein, testosterone and sex hormone binding globulin.

The Skinny on the Distribution of Body Fat

Body fat includes essential fat and storage fat. Essential fat (found in organs such as the heart, liver, kidneys, intestines and muscle tissue) is important because it is required to maintain your body’s functioning, such as temperature regulation and energy production. Storage fat consists of subcutaneous (just below the skin) fat and visceral (abdominal) fat.

Subcutaneous fat is essential to life as it provides insulation, cushioning and long-term energy storage. Yet, too much of it is a sign of being overweight or obese. Visceral fat (associated with upper body fat) is dangerous fat linked to increased metabolic complications.1,2

Visceral fat provides short-term energy storage and surrounds the stomach, intestines and liver. This deep fat within the belly releases hormones that increase inflammation in the body, whereas subcutaneous fat does not. These proinflammatory hormones are referred to as adipocytokines (small proteins generated by fat tissue and used in cell signaling to affect behavior of other cells).

These cytokines may yield insulin resistance (leading to type 2 diabetes) and obesity.3

The close proximity of visceral fat to the liver also makes it easier for the liver to turn the fat into cholesterol, specifically, LDL cholesterol. Next, it can enter the blood and build up along arterial walls, which leads to atherosclerosis.

Visceral fat results from an imbalance between caloric intake and energy expenditure. It’s also not just a problem in those who are obese, but also healthy individuals. This fat creates a challenging environment for the body to properly use insulin.

Peripheral adipose tissue (subcutaneous fat in the upper and lower parts of the body) is negatively associated with atherogenic metabolic risk factors.4 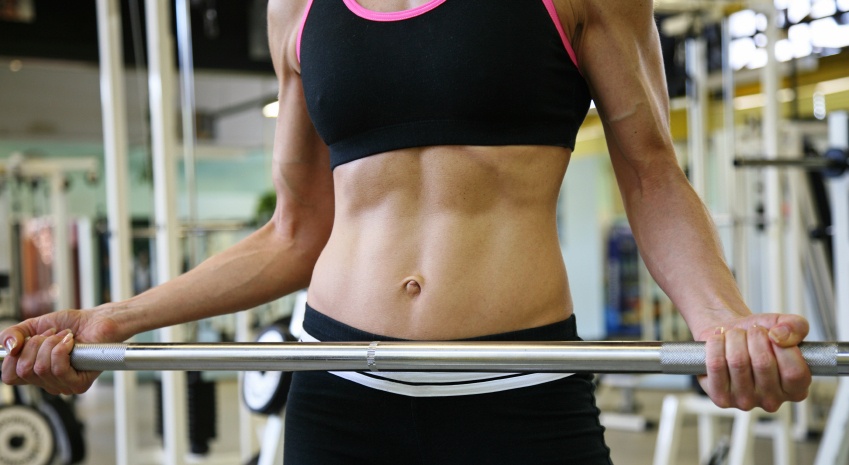 The National Institutes of Health considers waist circumference (WC), which measures abdominal obesity, as a clinically acceptable measure of abdominal fat. Below are the WCs for which health risks increase due to visceral fat:

Summary: Visceral fat surrounds important organs, which hinders their proper functioning. A high amount of visceral fat is associated with an increase in adipocytokine-release and inflammation. The health consequences of increased visceral fat include insulin resistance (leading to type 2 diabetes), obesity and atherosclerosis. WC is a better indicator of health risks than weight.

How does a smaller WC, not total body fat, affect our biomarkers? Waist circumference is an effective indictor of visceral fat and a powerful tool to evaluate your inner health. The research we discuss below focuses on WC, not weight, as a predictor for biomarkers of health. Let’s take a look at the effect on fasting glucose, high-sensitivity C-reactive protein, testosterone and sex hormone binding globulin.

Glucose homeostasis relies on the balance of insulin and glucagon (a hormone that increases blood glucose levels when glucose levels are low) to maintain blood glucose. Fasting glucose measures blood glucose after not eating for at least 8 hours. The test is usually performed to detect diabetes. Yet, it serves as a good measure of how well you control your blood sugar and whether you have impaired glucose tolerance.

WC is a good predictor of fasting glucose levels. A study looked at the WC of 182 non-diabetic, non-obese, middle-aged women as a measurement of risk for diabetes and cardiovascular disease. The study measured WC rather than BMI because BMI does not consider differences in gender, muscle mass or fat distribution. The study found a steady increase in fasting blood glucose levels as WC increased. WC correlated with glucose, and it remained significant even after the results were adjusted for exercise.

A study using 27,549 non-diabetic Koreans measured WC to evaluate its association with impaired fasting glucose (IFG) in men and women. IFG was classified as fasting blood glucose of 100-125 mg/dL without diabetes. Normal fasting glucose levels should be less than 100 mg/dL. In the highest WC groups, the study found that IFG was higher in men than in women. Other studies have also supported that WC is an important predictor of IFG.5,6

Another study used a weight loss intervention in obese postmenopausal women to determine the effects on body composition and the metabolic profile, specifically insulin and glucose levels. The lean body mass index group demonstrated the greatest improvements in fasting insulin levels and glucose disposal rate (the rate of glucose uptake from the blood by tissue like skeletal muscle). Even obese individuals can improve their fasting insulin and glucose disposal rate following weight loss, especially if there is an increase in lean body mass.

With respect to blood sugar and muscle mass, a study using a cross-sectional national survey found that hyperglycemia (high blood sugar) is associated with lower lean mass (less muscle) in older adults without a history of diabetes.

Insulin sensitivity (how well your cells respond to taking up glucose) is an important concept when looking at fasting glucose. Distribution of body fat, especially visceral and liver fat, is critical to the development of insulin resistance.3 Higher visceral adiposity in men is associated with higher postprandial (after eating) insulin levels.7 Yet, in women, who typically have more peripheral fat distribution, have improved insulin sensitivity when compared to central fat distribution.8 Ultimately, the gender differences in body composition are more favorable to women because they have a more insulin-sensitive environment.3

High-sensitivity C-reactive protein (hs-CRP) detects very low levels of C-reactive protein (CRP), much lower than the standard CRP test. Hence, hs-CRP is used to measure very low levels of inflammation in the body and to predict the risk for future heart disease. This inflammatory marker plays an important role in obesity because hs-CRP is associated with different measures of obesity. 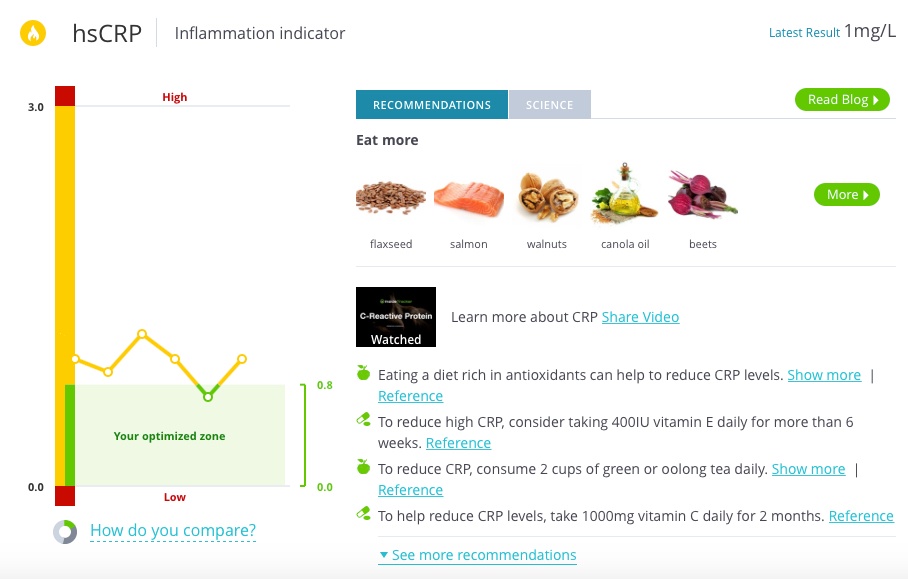 Abdominal obesity and hs-CRP are tightly associated.9 One study looked at sarcopenic (low muscle mass) obesity on various inflammatory markers, including hs-CRP. The study used 448 men and 396 women aged 65 years and older. They found that obesity and sarcopenic obesity are associated with increased levels of hs-CRP in men. For healthy middle-aged women, another study found that adiposity in women is also strongly associated with hs-CRP.

Ultimately, a higher WC is associated with greater inflammation, as suggested by elevated hs-CRP. Obesity, especially resulting from visceral fat, is an inflammatory disorder. Therefore, a leaner body composition may lead to a state of lower internal inflammation. This may not be completely evidenced through simply monitoring weight loss. 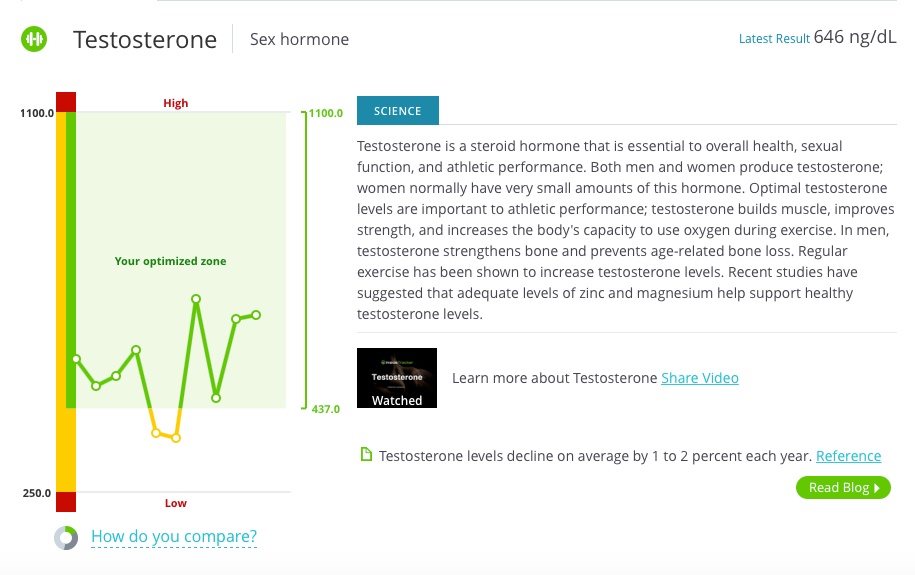 Abdominal obesity is suggested to decrease circulating testosterone levels.10,11 It is suggested that the increase in size of fat cells and the subsequent metabolic changes may relate to the decline in testosterone in obese men.12

To support the concept that weight loss should not be a main focus of overall health, one of the notable findings from this study included that total testosterone and SHBG were not associated with any change in weight or in total fat. In the men who were losing weight, the association between testosterone and lean mass was strongest. This is particularly important for older men because aging yields a loss in muscle mass.

Summary of All of the Biomarkers and Waist Circumference

See the Affect of Visceral Fat on Your Biomarkers with InsideTracker

Visible fat is frustrating aesthtically, but visceral fat leads to greater health risks. InsideTracker can help prevent these health risks by providing biomarker analysis to evaluate the relationship between fat deep within your body and your biomarkers of good health.

Wondering what ALL of your biomarkers mean? We've created this handy biomarker guide for reference—it's FREE & it's yours to download!

3. Giannopoulou I, Fernhall B, Carhart R, Weinstock RS, Baynard T, Figueroa A, et al. Effects of diet and/or exercise on the adipocytokine and inflammatory cytokine levels of postmenopausal women with type 2 diabetes. Metabolism. 2005;54(7):866–75.